HTC's next flagship, the U 11 (because why not) is due to be announced on May 16, and sure enough the phone has appeared on GeekBench. Or at least that's what HTC CBP is supposed to be.

This HTC CBP device that was put to the test is powered by the Snapdragon 835 (a.k.a. MSM8998) and runs on Android 7.1.1 - those bits were pretty much settled on by past leaks. GeekBench now reveals that there would be 4GB of RAM on board. 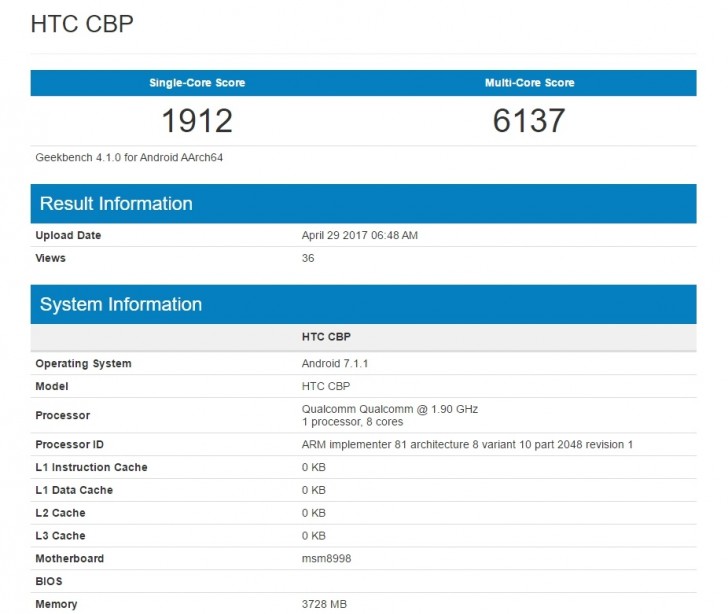 Specced this way, the CBP (or HTC U 11) scores 1912 points in the single-core test, and 6137 points with all 8 cores put to work. There's but a single phone that's officially on sale with the Snapdragon 835 inside, the Galaxy S8/S8+ (so, technically two phones), and in our testing the S8+ posted slightly lower single-core score (1832), but a little higher figure in multi-core (6301pts). Of course, the HTC U 11 is likely not in its final form, so we'll just wait a little longer to see what HTC has in store for us.

HTC U to have Bluetooth 5.0

The phone is coming with an adaptor that plugs into the USB-c port. The leaked specs also call for Boomsound (no front speakers though). And from what I understand, the glass back is a requirement for wireless charging at this point. I just wis...

I agree. I got the HTC 10 and in comparison to my Huawei P9 and S7 edge the Battery on the HTC 10 seems to diminish alot faster. I know the S7 edge has a bigger battery (by 600mah) but considering the edge has a QHD screen and half inch screen bigger...

laughing at all these htc trollers out here . clearly none of them can afford to buy any of the htc one series ,, probably you guys cheaped out and bought a desire series htc which does suck , though still not as much as any samsung , ive owned eve...