Apple has finally made the date of its spring event official. It's going to happen on March 21, so the rumors we've heard so far about the date being either March 15 or March 22 were off, but not by a whole lot.

The event invite, which you can see below, is as vague as possible, in typical Apple fashion. We shall however be 'looped in' on that occasion, as you can see. 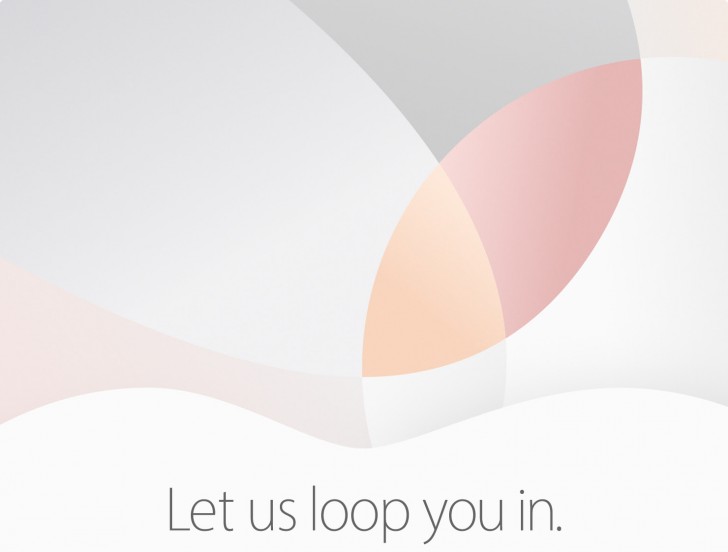 Apple is expected to announce both a new 4-inch iPhone and a 9.7-inch iPad Pro. The former will probably be called iPhone 5se or just iPhone SE, and will be incredibly similar in looks to the iPhone 5s from 2013. The internals will be updated, however, with rumors mentioning the A9 chip, as well as the camera system from the iPhone 6. It will also have NFC and Apple Pay support.

The next 9.7-inch Apple tablet will reportedly ditch the Air branding and instead be introduced as a smaller variation of the 12.9-inch iPad Pro. That makes sense considering that it's been rumored to borrow most of the standout features of that bigger model. The 9.7-inch device shall also have a Smart Connector, quad-speakers, but in a first for an Apple tablet is also apparently going to sport a LED flash for its main camera.

The Apple Watch could get some refreshed accessories, but we don't expect an entirely new model to be announced this month. We should also see new iterations for MacBook hardware, in both the Air and Pro lines (perhaps even a Retina MacBook Air). There's always the possibility of new software-related stuff to come too.

Hope there is hologram calling

So many apple haters! Their blood must boil whenever apple release anything! The hate is ridiculous and funny! funny because how low people fall, consumed with hate for a phone company!. People say apple going backwards by releasing a smaller phone...