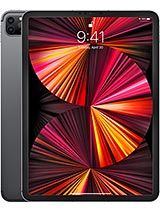 Anonymous, 10 Aug 2021this is literally a tablet, not a phone. tablets don’t need... moreAgree

John, 05 Aug 2021Save your money and buy the Air instead. It doesn't ma... moreWith iPad Pro you are getting:
-Better CPU and much more ram (for now both are overkill, but most probably they won't be after 3 years)
-Better 4-speaker sound instead of 2-speaker one
-120 hz display with better brightness
-Better cameras with Lidar (which are worse than ones in my Galaxy S9+ anyway, but I personally quite like some new functionalities that come together with Lidar).
-FaceId (personal preference, some people still prefer touch id)
-5G support (if you are going for cellular version)
-Thunderbolt (which is not as good as some people expected, but it's still much better than basic usb-c)

Additionally you cannot buy 128 Gb model of iPad Air, so you are stacked between 64 Gb (imo too small) and 256 Gb (but then you can just add $50 and get 128 Gb iPad Pro).
So imo currently there is no real sense of buying iPad Air in the end of 2021:
-For basic stuff just get a basic iPad, which is still fine as long as you don't do very demanding tasks
-For these very demanding tasks (mostly high-end games, video/graphics editing) and being as future proof as possible get iPad Pro (or just Macbook, if you don't need a touch screen).

harjas.singh, 03 Aug 2021Is the M1 Ipad air makes sense without mac os? Is it so ... moreSave your money and buy the Air instead. It doesn't matter if you have the M1 chipset, iPadOS is still a supersized iOS.

Lol, what a complete joke. No thanks, Apple. I'd rather buy a Microsoft Surface Pro 7 instead. I get a full-on proper desktop OS instead of a supersized iOS.

Is the M1 Ipad air makes sense without mac os?

Guy I am planning to get the new ipad pro 2021 but I am not sure which model should I get my main use will be for drawing and sculpting so I want to know if 12.9 is better in terms of performance compared to the 11 inch model?
Thanks!

Rebelgrrrl, 23 Jul 2021Not more than a few months after I spent a whack of money a... moreI know you are a lier, that never happens to ipads.

Not more than a few months after I spent a whack of money at Staples on a 2020 11" iPad Pro, the screen suffered a heat crack. Because of the way it ran from 1" in on the left side to the left edge, with a second small running straight across to the left, the local Mac computer store said it looked like a drop crack, even though it was new and had never been dropped. As a decades long Apple product user, I didn't buy Apple Care because I have never had a problem before. Unless you live in a big city with an Apple store close by, and not in a small town, you have no easy way to have your issue looked at and resolved. So I cannot recommend iPad pros - not with a crack that now runs from left edge to right corner.

I've came across this 3 iPads in my place on sale currently for the following prices:

Which one should I go for?
Is the A14 bionic on iPad Air more powerful than the A12Z bionic on the iPad pro 2020?
Apart from M1 chipset, any other major difference between ipad pro 2020 and 2021?

Nikki, 17 Jul 2021How Much Storage dies this device contain?dont you read information before you ask questions? all the info is stated in the specifications smh

Anonymous, 06 Jul 2021Do you guys know how long it's battery will last after... moreM using this device for playing PUBG Mobile. M getting around 4-5 Hrs Battery Backup. (Not Using 90 FPS).
While watching videos on Youtube kinda same 4-5 hrs.