The latest iPad Pro runs on the iOS 12.1 out of the box. The update was unveiled in June and released for all compatible devices this September.

There are very few visible changes across the iOS interface - most of the tweaks have happened under the hood. This year Apple decided to focus purely on performance, and it has accomplished something impressive. Performance has been improved across all older devices, which is quite an achievement. Animation times and app launches are shorter, system apps work faster, and all iPhone and iPad users should be able to tell the bump in speed. 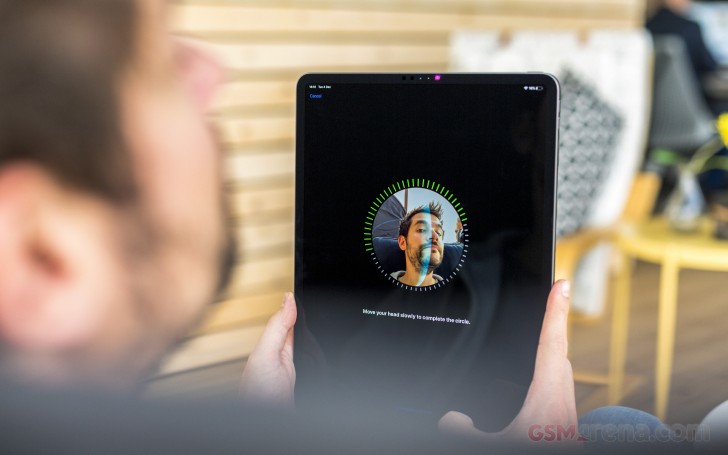 Apple iOS 12 introduces grouped notifications, Screen Time feature, better DND mode, expanded battery stats, improved Photos, new Measure app, and makes some changes on a few system apps. But other than a few new tricks here and there, the iOS 12 is the iOS you all know. So, let's take a quick look at it.

The third-generation iPad Pro officially marks the end of the iconic Home key and the Touch ID on the tablets. The iPhone X introduced the Face ID, and the XS series built from there. Now, the iPads get the latest Face ID found on the iPhone XS. The facial unlock works the same way on the iPad Pro, no matter the tablet's orientation - that is if your palm or thumb is not obstructing the front camera.

Apple's iOS 12 also supports a new Alternate Appearance option for the Face ID unlock. The majority of users will probably use this option to add a second face of, say, your significant other, but it's meant to do exactly what the name suggests - recognize an alternative appearance of you. The machine learning will improve the recognition over time on both faces, as usual.

Now that the Home Key is gone, there are new gestures for system-wide navigation.

Home gesture - you can now access the Home screen by using the same gesture as the iPhone X too. It's a bit confusing at first as on iPad you use the same gesture to pull up the Dock for multi-tasking. Flick too far or too quickly, and you get to the home screen accidentally.

Basically, you can do three things now - quick swipe for Home, a quick swipe and stop midway for multi-tasking, or slow swipe for the Dock.

The Dock within an app • The app switcher

The lockscreen is pretty simple - it has no shortcuts at all.

Accessing the Control Center on the iPad was always rather inelegant within iOS 11. With iOS 12 Apple has adopted the gestures from the iPhone X. Control Center is now accessed by swiping down from the top right, with a useful Control Center indicator being shown on the lock screen as an aide-memoire. While making access to the Control Center more intuitive, if you thought it was hard to access on an iPhone X, on an iPad it's always a two-handed operation.

You'll also notice that the information displayed in the status area has been rationalized with some indicators locations changing. On the left, the text 'iPad' - as if we need reminding, and the Wi-Fi strength signal has been replaced by the time and date, with the Wi-Fi and Cellular indicators now residing to the right of the display.

Here is a quick reminder of how weirdly some of the Control Center toggles work. A tap on Wi-Fi or Bluetooth disengages all connections, but it doesn't turn off these features. According to Apple this way you will keep AirDrop active but you won't be connected to anything until the next morning (or until you manually initiate the connection).

The first new thing you're most likely to notice in iOS 12 is the redesigned notifications, with Apple seemingly changing the notification center with every release. Well, now you can relax, notifications within iOS 12 have been overhauled and infused with added flexibility. Notifications are now grouped into easy to manage 'stacks' in your notification center and lock screen, while you can instantly tune each app while managing notifications. You can expand the whole stack, of course.

Apple didn't stop there though, we've also been graced with Bedtime Mode to block interruptions during our sleep. When enabled, during our scheduled Do Not Disturb hours the screen is dimmed and notifications will only appear in the Notification Centre - this respects your FaceTime calls from favorite settings and if you have any contacts set up as Emergency Bypass.

In the morning, everything returns to normal with your tablet displaying a 'good morning' message and the weather forecast - a nice touch.

Naturally, landscape view is available throughout the iOS and all apps feature the iPad-only two-column view.

Screen Time is Apple's response to calls from investors to address the issues of extended use of devices by children and smartphone addiction as a whole.

We first came across Screen Time via the Widget that is installed by default within iOS 12 which provides a summary of your usage, in our case broken down by Entertainment, Health & Fitness and other, other categories include Productivity, Social Networking, Reading & Reference, and education.

This is a consolidated view of all your devices that you have registered to the same iCloud account. Tapping the widget navigates you to the detailed breakdown of usage by app and website, number of times you picked up your tablet, and the number of Notifications - these are also found within Settings>Screen Time.

Knowledge is only part of the solution, though. You're also able to set Downtime, App Limits, Always Allowed apps, and Content & Privacy Restrictions for both your devices and more importantly your families devices. You can also completely disable Screen Time.

You'll be notified when you're near, or you've reached your time limit, but on your own device you can blast through this limit.

The battery stats have been enhanced in iOS 12 to provide a Battery Levels chart compared to the Activity chart over either a 24 hour or 10-day period. Additionally, the total time your screen has been on and off is also displayed.

Siri - Apple's digital assistant - is used by 400+ million people monthly. You summon it by holding the 'side' key (the Power key). It's continuously evolving thanks to all machine-learning improvements. While it's certainly not on par with the competition, it's getting there. Apple has created a more humanly sounding female voice, and there's a male voice, too. For example, Siri can pronounce the same word differently, matching the natural pronunciation of a sentence.

Siri Shortcuts are available with iOS 12. Over the course of testing though we did start to see Siri make more nuanced recommendations, for example, understanding who we text and when and offering to send a text.

With their upcoming debut on macOS, Apple took the opportunity to treat Apple Books, Stocks, News, and Voice Memos with a fresh coat of paint.

Apple has also introduced a new app for iOS 12 - Measure. It does what it says on the tin using AR to automatically measure flat rectangular surfaces and draw lines across surfaces to measure distances.

Rectangular objects are automatically recognized as are corners making it relatively straightforward to measure stuff. For now, at least, it can't yet identify circular items to measure diameters and circumferences.

As far as accuracy goes, it's just OK. In our ruler test, it was often 1-2cm off! Just don't use it for that precise granite worktop order for your kitchen and take it for what it is! While smart, you'll probably only be using this for measuring smaller items or short distances.

Unlike on the iPhone though, the iPad's Measure app does not come with a Level option.

Apple's Photos app handles all of your images. It's been constantly upgraded and with iOS 12 searching for those cherished memories has become more potent as places/business can be searched, while multiple search parameters allow you to drill down to the find your photos even faster.

Meanwhile Apple's Videos app is as basic as ever.

Finally, Music is the default player and it relies heavily on Apple Music. But even if you decide not to opt for the streaming service, it can still do an excellent job if you have a few minutes to add your songs via iTunes. The number of clicks is the same as if you were to copy them via Windows Explorer, but the prejudice against the app quadruples those.

We hoped Apple would use the year it had to fix the mess the iOS 11 was and that's exactly what's happened with iOS 12. Once known for the meticulous attention to detail Apple had failed exactly in this chapter last year, but quite a few nonsenses and glitches have been fixed, while improvements made on others.

The iOS 12 may look like one of the smallest upgrades in iOS history ever, but the performance improvements going all the way back to the five-years-old iPhone 5s are undeniable and impressive. That's a bold move which only Apple is in position to make, and it did freshen up the entire iPhone and iPad lineup.