The camera on the iPhone 5 uses the same 8 megapixel sensor as the one on the iPhone 4S, producing stills of 3264x2448 pixels resolution. However, this time the camera module is 18% smaller and there's a cool new Panorama feature which is a part of iOS6.

The camera interface has seen only cosmetic changes, over the previous iOS build. The shutter button is silver and circular on the iPhone 5, instead of the compared to the ellipse on the 4S.

The new feature that got the most attention is the Panorama mode, which is available for the iPhone 5, iPod Touch (5th generation) and the iPhone 4S. It won't available on the New iPad's 5MP iSight camera just like the HDR mode before it.

Panorama mode is accessed through the Options tab in the camera app. It works only in portrait mode and from left to right, but is easy and intuitive enough. You just move your iPhone 5 in the direction the arrow points and the software will automatically tell you to slow down or speed up.

Other than that, nothing has really changed. You can enable a grid in the viewfinder to help you with framing or you can turn on the high dynamic range mode. It shoots a couple of shots simultaneously with different exposures and outputs a single photo with increased dynamic range. You can opt to preserve the original photos too.

The camera on the iPhone 5 continues Apple's dedication in bringing quality imaging to its customers. It produces very good images with lots of fine detail and great color reproduction.

Noise levels are decent on the iPhone 5, though we've seen smartphones do way better.

The iPhone 5 Panorama mode is really good and offers a simple process with a seamless stitching and seamless processing, which is done in just seconds.

The stitching process is very fast and when done properly you won't notice where the individual photos have been patched up. Images come out with a maximum resolution of 28 megapixels and are saved in regular JPEG format. 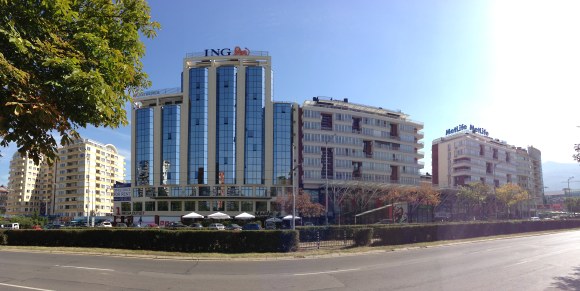 In terms of macro photography the iPhone 5 can get up as close 5-6 cm from the desired target and get a very detailed image.

To give you a better idea of the iPhone 5 camera capabilities, we decided to do a quick shootout against its predecessor, which is still one of the most capable 8MP cameraphones around.

One of the first things we noticed when we compared photos from the two phones is that the new iPhone 5 camera has a slightly wider angle of view than the one in the 4S - 4.13mm vs. 4.28mm (or about 34mm vs. 35mm in 35mm terms). It's a minor difference, though, and one that shouldn't affect your shooting habits.

The first pair of photos is of a building with a fine texture on its walls, which usually makes spotting the difference in resolved detail pretty easy. When it comes to the two iPhones, however, it is not.

The roughness of the wall is slightly more apparent in the iPhone 5 photo and the yellow and orange colors are slightly more accurate, but you really need to be looking at 100% to spot the difference

Then we picked a photo of a building in the sun and focused on the part of it that's in the shade. Here the iPhone 5 demonstrates better contrast and a slightly lower amount of noise, plus slightly better sharpness.

The next image is of a petrol station's banner in the sun. Here the images are almost too close to call, but the iPhone 5 shows slightly better color rendering and a bit less noise in the shadow area.

Finally, a photo that is mostly blue sky and blue windows (blue parts of images typically have more noise in the photos than the other two primary colors). Once again, we see better contrast and lower noise in the iPhone 5 photo over the 4S one, though the differences are pretty minor.

Apple bragged about the improved low-light performance of the iPhone 5 camera compared to the 4S. Here are our samples, taken with a tripod, at the same time, from the same spot. We can safely say that the difference is close to none. Both phones produced stellar images with good overall detail but were a bit on the noisy side.

As we mentioned, the iPhone 5 camera module is smaller than the one in the 4S in order to fit into the thinner phone, so just not losing image quality would have been quite an acceptable result this year. Apple even managed to squeeze out slightly better photos out of the iPhone 5, which is commendable.

Still, if you have an iPhone 4S, you have nothing to be jealous of - you will barely see any improvement in image quality if you upgrade

We've added the latest and greatest iPhone to our photo quality comparison tool and have put it against the likes of the iPhone 4S and the Samsung Galaxy S III. The tool's page will give you additional information on what to look out for.

The camcorder user interface is almost identical to the still camera one. The shutter button here however overlays the viewfinder's feed, which stretches from edge to edge as the video is the same aspect as the screen.

One of the main new video recording features of the iPhone 5 is simultaneous video and image capture. What this means is that while recording video you can also take photos with the camera. The feature didn't make its way to the iPhone 4S, which is very odd to us.

The thing, in this case the Apple's iPhone 5 doesn't capture 8 MP photos, but 2 MP ones instead. This makes the whole feature utterly useless because what you get is basically one of the frames of your video. Given that Android flagships have had full-res stills while recording videos for half a year now, we are rather surprised that Apple didn't get this right.

In terms of actual video capture the iPhone 5 does a great job, as expected. The videos run smoothly, there's a great amount of detail and focusing is fast and accurate.

Videos have a bitrate of around 17Mbps, the framerate hovers around the 29 fps mark, while audio bitrate is 63Kbps. What we find really frustrating is that Apple still doesn't utilize the full potential of the iPhone's microphones and the videos recorded with the iPhone 5 come with mono sound, which is particularly bad considering it has three mics on board.

Here's a direct download link to a 1080p video sample taken straight off the iPhone 5.

Check out the iPhone 5 in our video comparison tool against the iPhone 4S and Samsung's Galaxy S III.