Apple is now the number one smartphone manufacturer in the world (surpassing Samsung for the first time in last five years), according to a new report from market research firm Strategy Analytics.

The report reveals that the iPhone maker shipped a total of 78.3 million smartphones in Q4 2016, capturing 17.8% market share. 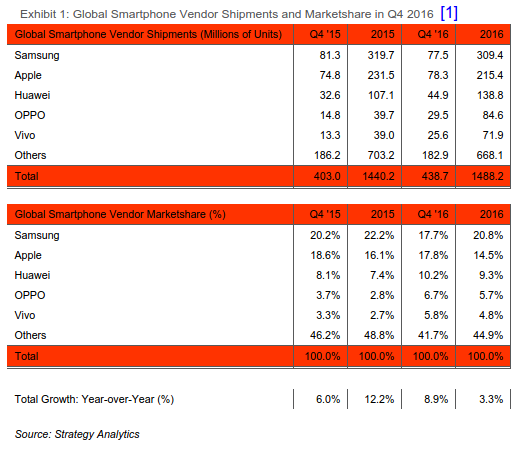 On the other hand, the South Korean tech giant managed to ship a total of 77.5 million units in the quarter, which translates into 17.7% share of the market.

"This was the iPhone’s best performance for over a year, as Apple capitalized on Samsung’s recent missteps," the report said. " Samsung lost momentum in the quarter as a result of its Note7 battery fiasco."

Apple sells more Plus phones in Q4 2016 than ever

I know you're sad, but don't find excuses for Samsung. it's just one quarter, it will be back to normal in Q1. Console yourself that apple will never consistently be number 1 since they only sell flagships.

in what way is it misleading? its not saying iOS is outselling Android, its saying apple are selling more phones than samsung