Asus breaks up with the square for the Zenwatch 3

Today at IFA in Berlin Asus unveiled the next generation in its Zenwatch family. The Zenwatch 3 marks a departure from the rectangular shape of the previous two iterations and adopts a more classic circular design. 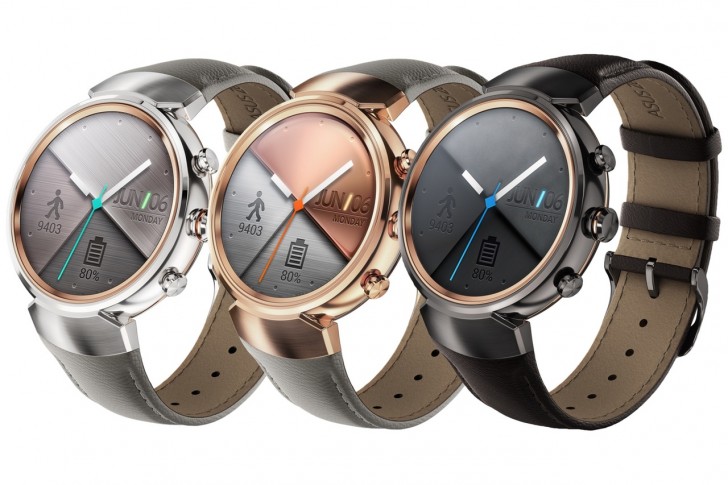 The circle only begins to describe its looks, though. The Zenwatch 3 will be available in three case colors - Gunmetal, Silver, and Rose Gold, but the rose gold ring around the watch face is a permanent fixture on all three. Regardless of the color all of the models are made of grade 316L stainless steel and also carry IP67 certification - good for immersion in water up to 1m deep for up to 30 minutes.

Three also happens to be the number of buttons on the right side of the Zenwatch 3, which is not something you can say about other Android Wear smartwatches. Asus says that this configuration should bring more intuitive interaction with the device.

The lugs are rather unorthodox too, fluidly angled to wrap around the wrist, but with some sharp edges for contrast. A choice of leather and rubber straps will be available, but there are no stainless steel options for the wrist strap, not yet at least.

The display is a 1.39-inch AMOLED affair with 400 x 400 pixel resolution - very similar to the Huawei Watch. Doing the number crunching is the Snapdragon Wear 2100 chipset, paired with half a gig of RAM, while internal storage is 4GB. Battery capacity is 341mAh, which could (but likely won't) be enough for two days of use. Fret not though, because thanks to Asus' HyperCharge tech you'd be able to go from 0 to 60% in 15min.

The Zenwatch 3 will carry a price tag of €229 in Europe, though the launch date is yet to be announced.

Also make sure to watch the promo video for the Zenwatch 3 below, but be prepared for some heavy marketing speak.

These expensive "toys" are not popular and they have FAILED to evolve or get updated or enhanced in any way since coming out. ALL the suppliers have basically the same spec; like they are collaborating...? Is that even legal? It's a shit product a...

I have the new Fossil which has the same processor. I can tell you that the battery lasts two days with the watch face on all the time. I turn it off when I go to bed. That new Processor is great.