The Zenfone 4 Max (ZC554KL) comes with a model name ASUS_X00ID and is a direct successor to the Zenfone 3 Max. It is expected to have a large battery but midrange specs.

The Zenfone 4 Pro is a new device within the Zenfone series so we are yet to find out where it's positioned. All we know so far is the model name ASUS_Z01GD.

The Zenfone 4 Selfie is a phone that appeared on GFXBench, and we know what some of the specs are. The device with model name ASUS_Z01MD will have a Snapdragon 625 chipset with eight Cortex-A53 cores, clocked at 2.0 GHz.

It will have a 16 MP camera on the back with 4K video recording, and a front one with a 12 MP sensor that shoots in 4K as well. 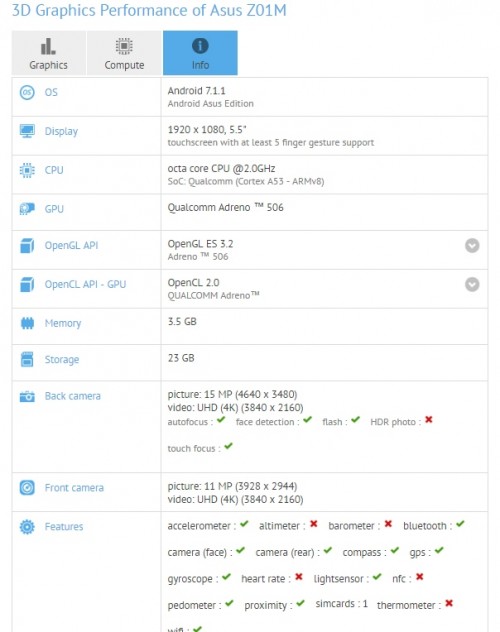 In the list, we also see three Zenfone 4 devices. Looking how Asus handled its Zenfone 3 series, we might expect two different RAM/storage configuarions. The third version is called Zenfone 4V and is going to be exclusive on Verizon’s network.

Asus was planning to launch the Zenfone 4 series in May, but “design overhaul and efficiency updates” postponed the release to July.

Asus to launch new Zenfone 4 series smartphones in May

Asus Zenfone Zoom S to come to Europe next month

Likely to be different depts and teams handling the production of phones. So I assume the teams in phone flopped terribly and the teams in motherboards soared high and higher.

Why is Asus so obsessed with Japan in its Zen name? Why didn't it use the famous motherboard series ROG and name the phones ROP - republic of phones and serialise them correctly. Don't jump all over the shop and repeat the numbers again. I can't see ...

Why would you need a 4K video recording front facing camera?! So we can see your zits and pimples more clearly?