The Asus ROG Phone II brings the ultimate smartphone gaming experience with the only 120Hz 10-bit HDR screen, an unmatched collection of accessories and key partnerships with game developers. 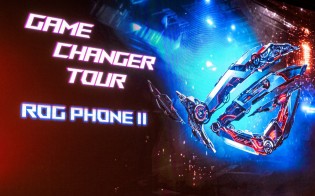 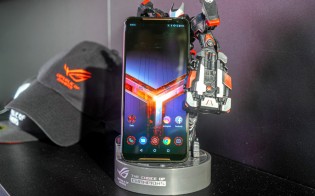 The phone is designed both for hardcore gamers and for Android power users. To that end, you can switch between a near-stock UI (borrowed from the Zenfone 6) and the game-focused ROG UI.

The dual nature of the phone can be seen in its design too. The width was kept just under 78mm so it can be used one-handed, but Asus optimized everything for landscape use.

The 6.59” AMOLED screen can run at up to 120Hz refresh rate with 1ms latency (60Hz and 90Hz modes are also available). The touch sensor has a sampling rate of 240Hz and thanks to optimizations to the Android core, Asus claims it achieved lower touch latency than the iPhone XS Max (iPhones were always faster than Androids in this regard). 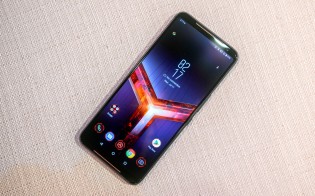 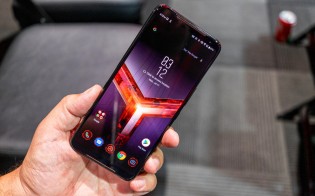 The Armoury Crate is Asus’ game launcher (it should be familiar to owners of ROG hardware). It allows you to customize the settings for each game, e.g. whether to run the screen in 120Hz mode and if the high-performance X-mode should be enabled. There’s also the Game Genie to handle things like notifications, incoming calls and locking the brightness.

Flanking the screen are the front-facing stereo speakers with DTS:X Ultra support, so they can simulate multi-channel audio. They were beefed up with larger chambers making them 2.5x louder than the speakers on the first-gen ROG Phone.

The AirTriggers are new and improved as well. You can now rest your fingers on them as you would on actual triggers, they will be able to tell when you press down. They also recognize a new swiping gesture.

There are two vibration motors, one on the left and one on the right. This can be used in games (e.g. Asphalt 9) for directional haptic feedback. They are also used by the AirTriggers both on press down and release to simulate actual buttons. Asus improved the motors to reduce the vibration feedback latency for the triggers down to 20ms. 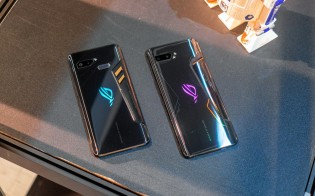 The ROG Aura has an RGB backlight

There’s a 3.5mm headphone jack that keeps up with the theme of low latency (it’s faster than even aptX LL). Also, there are four microphones so no matter how you hold the phone, it will still get clear audio – either to talk to your teammates or for commentary when streaming.

To that end, the 24MP front-facing camera is optimized for landscape use. Careful antenna placement enables low-latency, high-throughput Wi-Fi connectivity, which is also a boon to competitive gaming and streaming.

The Asus ROG Phone II is powered by the Snapdragon 855 Plus chipset, which overclocks the Adreno 640 GPU to 675MHz for a 15% boost in performance. The prime CPU core is overclocked too, although the gains there are just 4%.

To prevent thermal throttling, Asus put in vents that lead the heat away from the vapor chamber to the external vents. In the box you’ll get the second generation AeroActive Cooler II. It’s four times quieter (24dB) and keeps the exterior of the phone cooler (dropping the temperature by 5°C lower, up from 4°C). This cooler can also double as a kickstand, so you can leave the phone on the table and use a wireless controller. 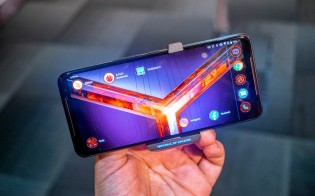 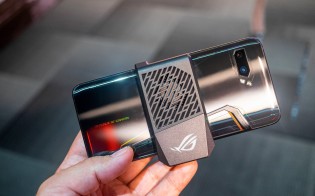 Enter the ROG Kunai Gamepad - the best accessory for the ROG Phone II. It draws more than a little inspiration from the Nintendo Switch as it offers very similar gaming modes.

First, you can attach the two halves to the sides of the phone for a handheld experience. Or attach them together and use them as a wireless gamepad. In this configuration you can use one of the docks – WiGig wireless display dock, Pro Dock or the Mobile Desktop Dock – to output image to a TV. 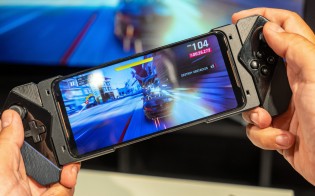 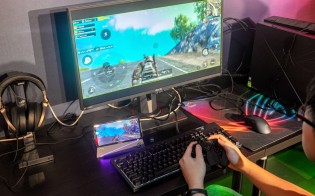 Kunai Gamepad: handheld • with a dock

The Kunai Gamepad is also used in conjunction with the TwinView Dock II. It adds a second 120Hz/1ms touchscreen, a cooling fan and a 5,000mAh battery. This dock has been redesigned to make it both lighter and with better weight distribution. Along with Asphalt 9, Shadowgun Legends also supports the TwinView Dock II (dual vibration as well). 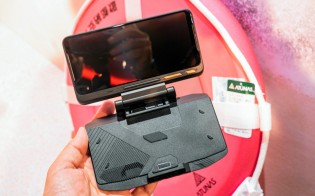 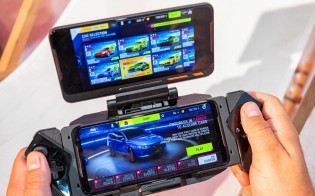 TwinView Dock II: by itself • with the phone an Kunai controllers

Speaking of battery, the Asus ROG Phone II has a massive 6,000mAh capacity. It promises to significantly outlast its opponents, offering 7 hours of non-stop PUBG action. And it charges quickly too with 30W ROG HyperCharge using a standard 3A cable (Quick Charge 4.0 is also supported).

The camera on the rear borrows the sensors from the Zenfone 6. This means a 48MP Quad Bayer for the main camera and a 13MP sensor behind the 125° ultra wide-angle lens. There’s no flip-up mechanism here, though, as the phone has a dedicated 24MP selfie camera.

They all crap comparing to proper console games. Mobile gaming is still mobile gaming, cant compete with big boys. The only thing it could be useful to use it is to stream proper console or PC games, otherwise this phone is useless.

That and the big battery. Assuming if it's properly factory optimized though. Potential problem is actual SKU prices per country.

This or ZTE nubia Red Magic 3?