One of the few upgrades the ROG Phone 5s Pro offers over the vanilla set of models is the 360Hz touch sampling rate on the touchscreen, up from 300Hz. As per Asus' numbers, that brings down touch latency from 24.3ms to 24ms.

Unfortunately, we have no real way of testing how that may translate to actual input latency. That being said, we have no reason to question the advertised numbers. 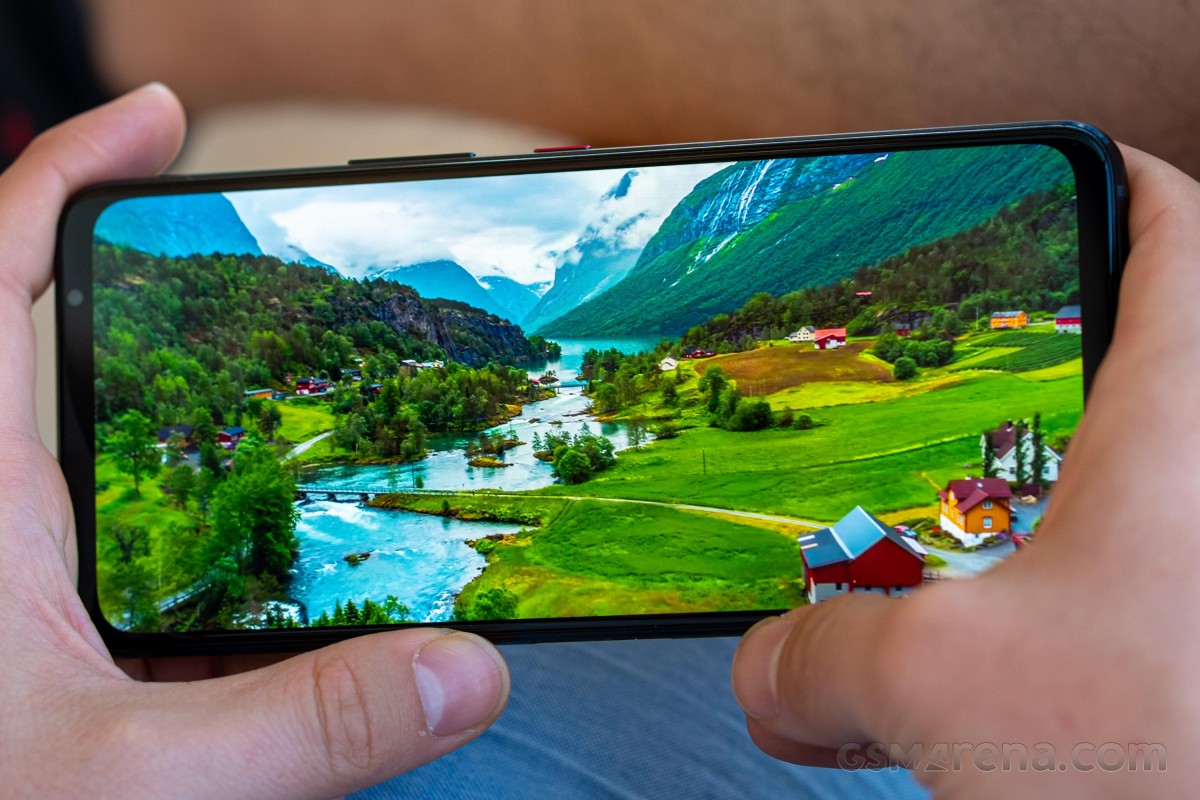 Our best guess is that this particular upgrade was motivated by the desire to keep up with competitors in pure numbers and PR terms. Then again, more is better is probably a valid logic too. In any case, we were compelled to test if anything else has changed with the display on the ROG Phone 5s Pro.

To our surprise, the ROG Phone 5s Pro managed to best the maximum brightness in our testing, compared to the vanilla ROG Phone 5. The difference is not major, but still big enough to not fall within the margin of error. Perhaps Asus is using a different panel, or perhaps it is down to unit-to-unit difference. Either way, we'll take the nice little bump.

Color accuracy on our ROG Phone 5s Pro unit offers another hint that Asus might be using a different panel. Not necessarily for the better, this time around, though. The original promise with the release of the ROG Phone 5 was 111% coverage of the DCI-P3 color space, 150.89% of sRGB and an average deltaE 2000 of less than 1. With every single unit factory calibrated for the best possible results.

Measuring the color accuracy of the ROG Phone 5s Pro leads us to believe that Asus is still definitely using great panels with additional calibration. However, we didn't manage to get deltaE value as low as the advertised value of 1.

In the Standard display mode, intended to target the sRGB color space, the ROG Phone 5s Pro did a bit worse than its vanilla sibling. Not by much, but we did end up having to use the included temperature slider to get to deltaE values that can be considered color-accurate.

Beyond Standard mode, the ROG Phone 5 also has a trio of other color presets - Cinema, which slightly boosts some of the main color channels, but retains a rather subdued look, Default, which is probably the best choice for daily use, since it delivers that familiar OLED "punch" all around. And then there is Natural, which seems to make everything a bit redder and hotter, but also boosts the colder blue and similar channels a bit as well, making for a particular look we don't really appreciate. But, it's there if you want it.

You can also do a Custom color profile, which allows you to adjust red, green and blue channels independently. 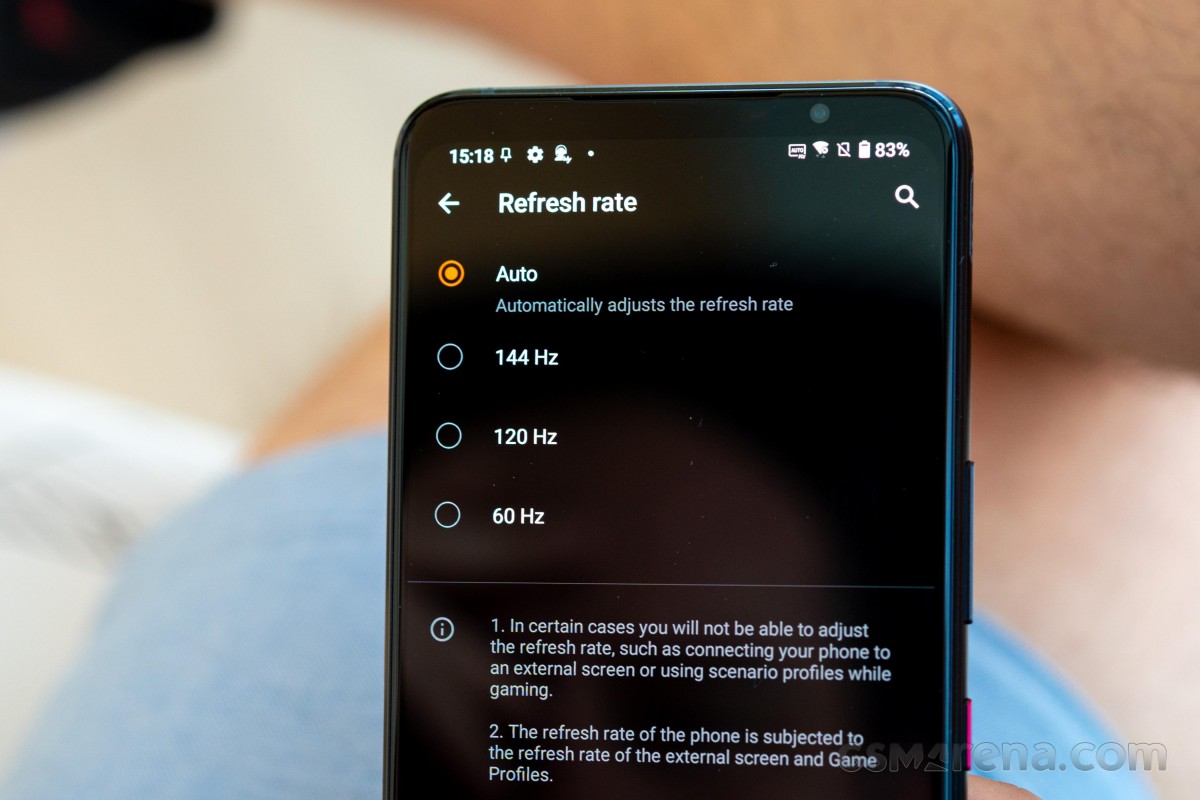 Just as a reminder, the ROG Phone 5s Pro has a 10-bit panel, with HDR10+ support, as well as the highest Widevine L1 certification, which makes it perfect for streaming and consuming HDR content.

The high refresh rate handling on offer here is among the most flexible in the industry. You get fixed 60Hz, 90Hz, 120Hz and 144Hz toggles that lock the UI and most apps to said refresh rate, as well as an Auto option, which tends to favor 120Hz for high refresh rate situations and 60Hz for the rest. You can read more about it and other neat options Asus offers, like per-app refresh rate settings in our full ROG Phone 5 review.

The ROG Phone 5s Pro has the same 6,000 mAh battery capacity as its sibling. Nothing has changed in that department.

The particulars regarding the battery setup are still quite interesting, though. Asus actually decided to split the battery up in two for the ROG Phone 5 line, with 3,000 mAh and 3,000 mAh flanking the central-mounted main PCB of the phone. Each pack also uses MMT (Middle Middle Tab) technology, which has enabled the charging rate increase from 30W in the previous generation up to the 65W the ROG Phone 5 can do.

You can get more battery tech and setup details in the battery section of our extensive vanilla ROG Phone 5 review. 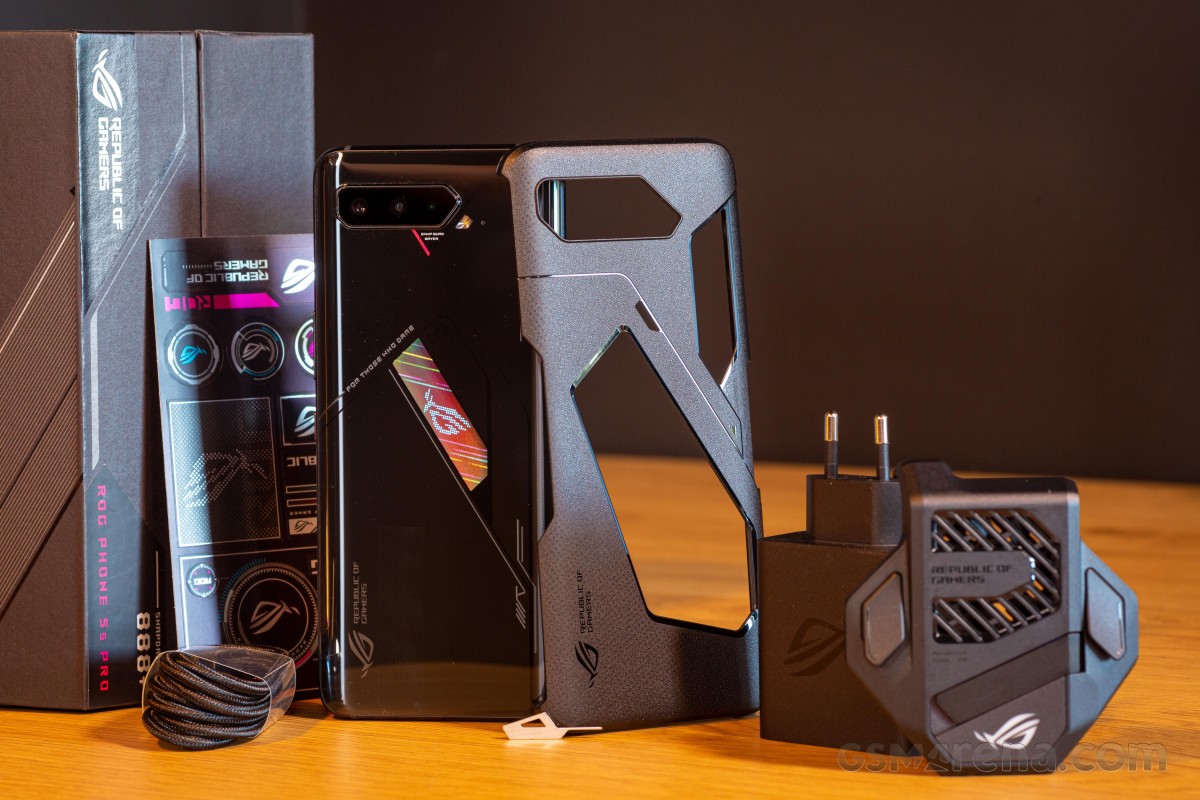 Even though nothing has changed regarding the actual battery setup or the charging capabilities, the ROG Phone 5s pair still have a slightly different Snapdragon 888+ chipset under the hood, which necessitates a new set of battery tests. 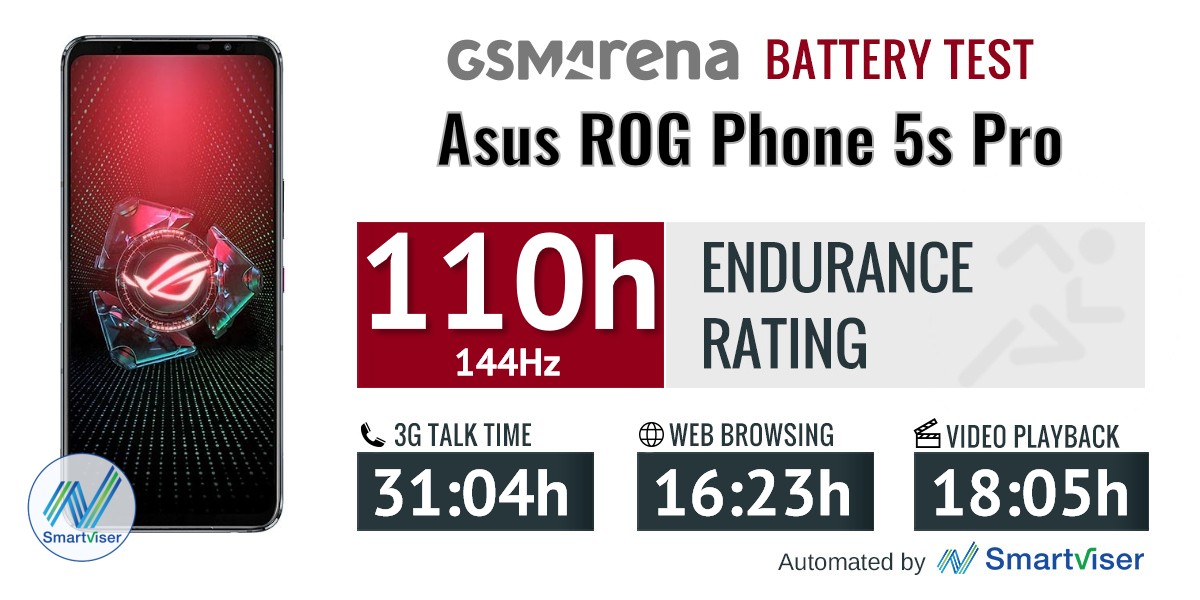 We are happy to say that despite some minor variations and differences in numbers here and there, the ROG Phone 5s Pro basically managed an identical endurance rating to the vanilla ROG Phone 5.

Frankly, we expected about as much since the Snapdragon 888 and 888+ still share the same modem setup and manufacturing process, among other things. Even so, it is worth noting that for some reason, the ROG Phone 5s Pro and its Snapdragon 888+ seemed to consistently score slightly less in both our call and standby tests. Not by much, by any means and potentially within the margin of error. On the flip side, the newer ROG Phone 5s Pro model seemed to fare a bit better in the on-screen video and web browsing tests by just enough to bring the total endurance number back in line. 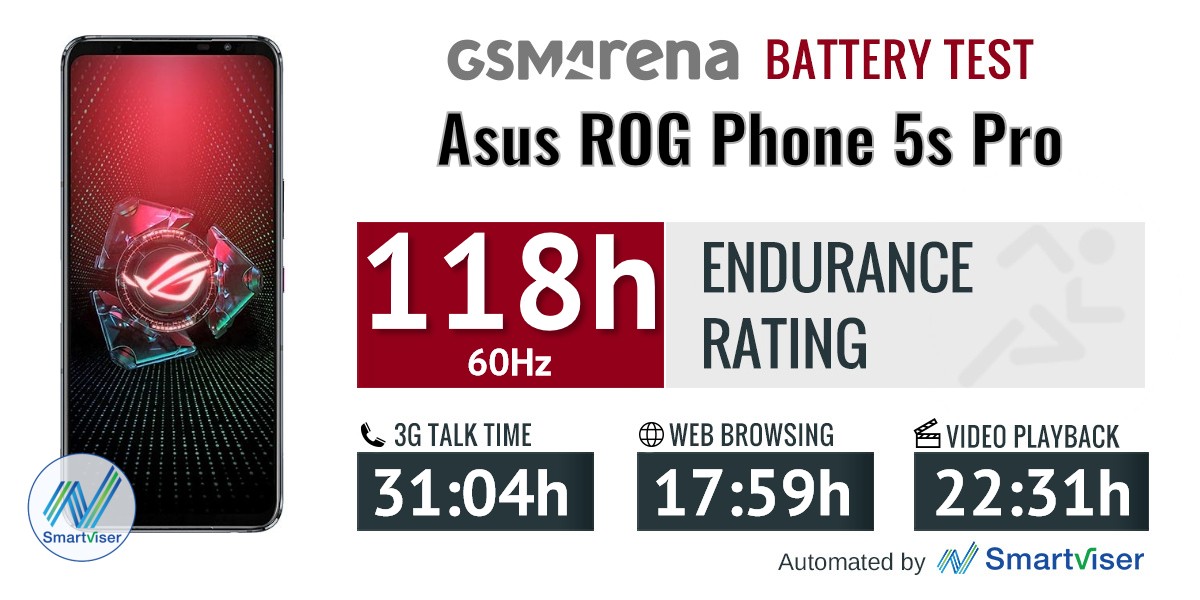 We made sure to test with the display locked at 60Hz as well and got an expected and consistent boost in both video and web numbers. Though, not a substantial one. We decided to publish the two separate scorecards instead of one combined one with 144Hz web browsing and 60Hz video playback, which we would normally do since the automatic refresh rate handling here isn't as neat and tidy for that to be applicable. You can read more about it here, but typically the algorithm tends to stick to 120Hz while interacting with the phone and then often, but not always, drops down to 60Hz for things like video playback. 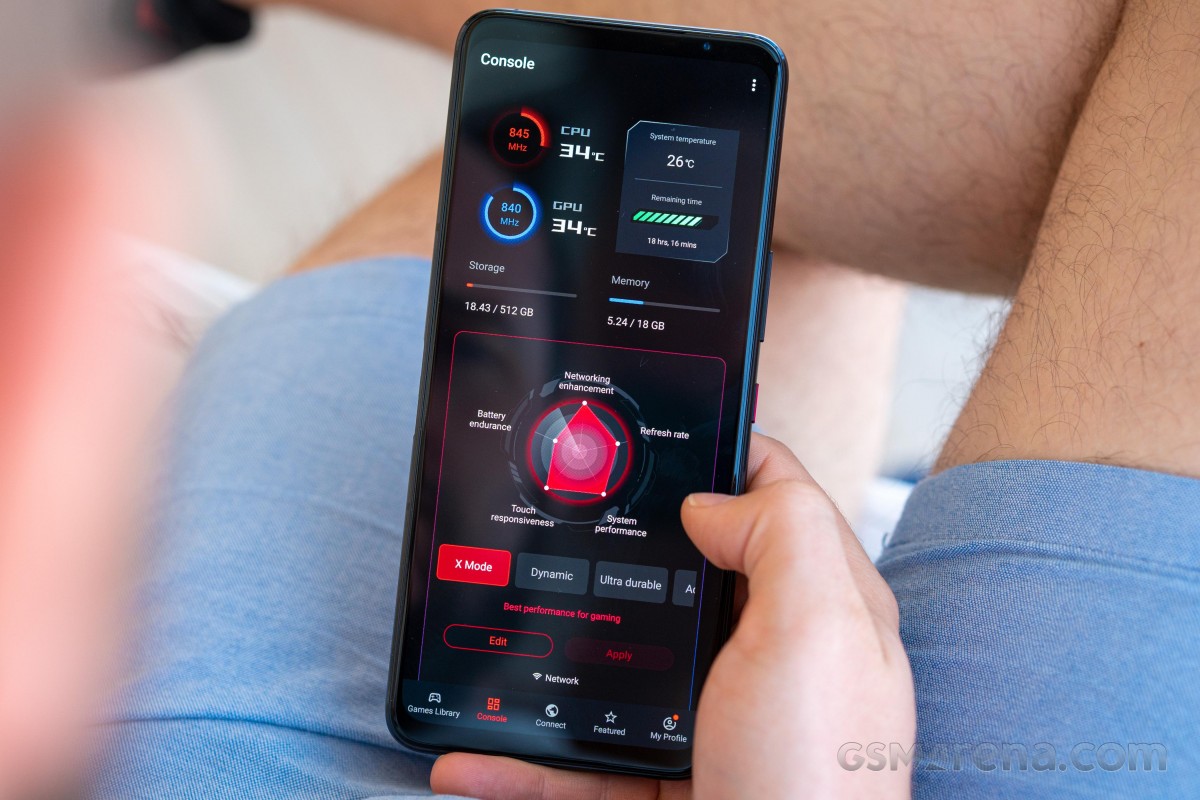 Long story short - the ROG Phone 5s Pro, in practical terms, has the same solid battery endurance as its predecessor, despite the chipset swap. The actual number you can expect to get, depending on your usage, will likely sit somewhere between the 144Hz and 60Hz figures we published.

So far so good. Only time will tell

are there any issues like in rog phone 5 lately?