Asus just unveiled the Zenfone Max (M2) and Zenfone Max Pro (M2) (yes, they appeared a few days ago, but apparently that was premature). They go on sale in Indonesia tomorrow and in India on December 18 (next Tuesday).

In Indonesia, Lazada will have exclusivity on the Max (M2) and will charge IDR 2,300,000 for it. Shopee will exclusively offer the Max Pro M2 for IDR 2,800,000. Note these are online deals, but starting December 14 there will be units in 12 Asus partner stores around the country. On that they they will gift you a free Asus power bank with each M2 you buy.

Update: The Pro model is coming to the Philippines on December 15 through Lazada and Shopee. It will cost PHP 15,000 for the 6/64GB model. 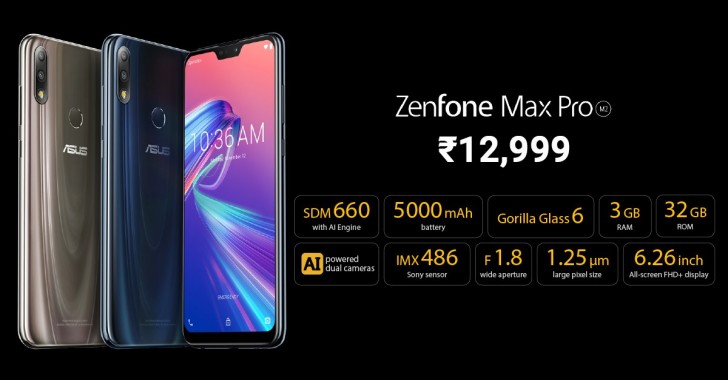 Here’s a quick introduction to both phones. They run stock Android and will get Android 9 Pie in January. Also, you get 100GB of Google Drive storage with them.

The card slot holds two SIMs and a microSD, so there’s an opportunity to expand. The fully-loaded model has 6GB of RAM and 64GB storage.

The Pro has a 12+5MP dual camera on the back (with Sony IMX486 sensors, 1.25µm pixels, f/1.8 aperture). The second module is a depth sensor. In the notch on the front is the second dual camera – 13+5MP with dedicated LED flash.

The phone packs a large 5,000mAh battery. There’s a fingerprint reader on the back and face unlock is enabled too. The loudspeaker boasts an NXP SmartAmp. 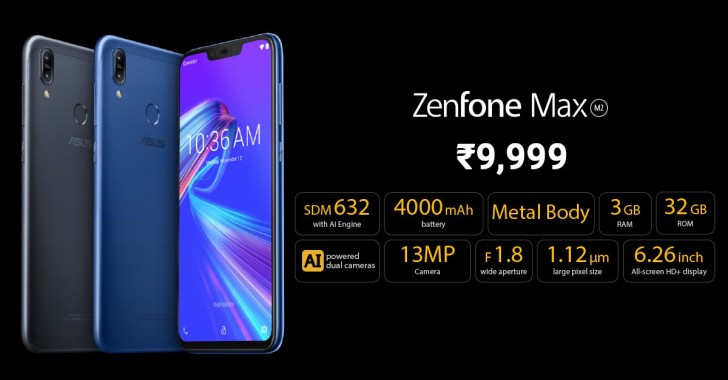 The rear camera features a 13MP main module (1.12µm, f/1.8) and a 2MP depth sensor. This camera can also shoot 4K video, despite the change in chipset. The selfie camera is a single 8MP shooter also with a dedicated LED flash.

Both M2 models have 3.5mm headphone jacks and use microUSB, which charges at 10W.

Asus Zenfone 5Z to get Android Pie in January 2019

But these products are not available in India when checked in Flipkart it is showing out of stock .. at last i booked Samsung M30

I have advise for you, maybe you can try to purchase Xperia XZ2 Compact? you get all you want, and you don't mind the price right? as you want all of feature in budget phone

Already has got certificate by FCC, but without that new bands. Go to Zentalk and post that in 'Ideas for next' (or smthg similar) forum. . . . and by the way asks Qualcomm for charging less for supported bands!