6.4-inch display is okay, not great

The Zenfone 6 is equipped with a 6.4-inch IPS LCD with 1080x2340px resolution in a 19.5:9 aspect ratio, for a pixel density of 403ppi. It's got rounded corners, but no notches or cutouts whatsoever - that was a priority. 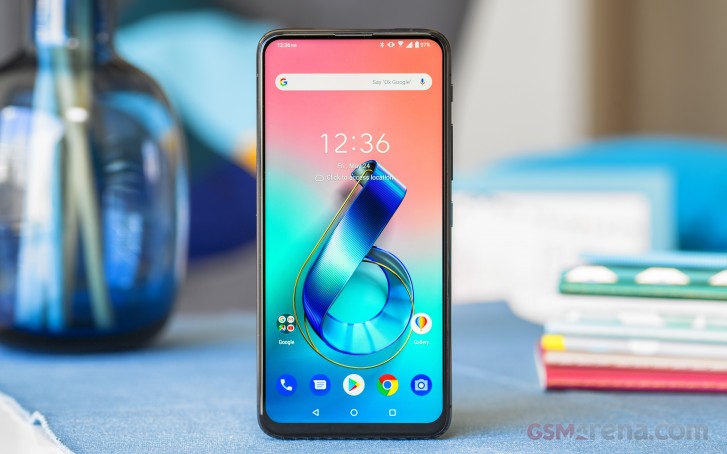 Asus explains its choice not to fit an OLED display with costs - the LCD helped stay within budget. Our tests showed that the display is, indeed, not the greatest bit about the Zenfone 6. A maximum brightness of 455nits in auto mode and 424 when adjusting the slider manually isn't very high. In fact most recent OLEDs can actuallly go brighter, and LCDs should be able to pump out even more nits.

Besides the Adaptive brightness toggle, there's also one for Brightness Booster. That should add some extra nits for short periods of time, and we were able to occasionally get 478nits readings. There was little consistency between tests, however, so we can't really speak as to its effectiveness. Additionally, we can't help but feel that's one toggle too many.

The fairly high illumination of the blacks means a contrast ratio around 1200:1 - we've gotten used to at least 1600:1 from the better LCDs.

Additionally, the brightness slider isn't remotely linear and we measured 200nits at the 86% setting.

Update, May 29: We dug further into our brightness testing, and came to some peculiar findings. In addition to our usual routine that's based on an industry-standard software/hardware combination, we did a couple of low-fi tests as well. Opening a pure white image in Chrome got us the promised 600nits, precisely. Viewing the same image in the Gallery app we got 545nits, which is also about what we measured on a blank white area in the settings menu.

So apparently brightness control is not consistent from app to app and you are unlikely to get the advertised max brightness level in all apps.

We have little praise for the way the Zenfone 6 handles color. While the display does look vibrant in the default Wide gamut mode, it's not overly accurate. We measured an average deltaE of 5.5 and a maximum of 8.9 for our usual set of DCI-P3 swatches, with the the whites heavily shifted towards blue/cyan. The Standard mode was supposed to be tuned for accurate sRGB rendition but we measured an average deviation with a deltaE of 5.9 and a maximum of 9.7, which is not stellar.

The Zenfone 6 packs a 5,000mAh battery - that would be the biggest battery fitted to a mainstream production phone with the Snapdragon 855. Yes, there's the nubia Red Magic 3 (5,000mAh), which matches it and then the foldable Energizer Power Max P8100S (10,000mAh), but that last one likely isn't happening at all.

The point is, high-end phones typically come with smaller batteries than the Zenfone 6. The OnePlus 7 Pro, for example, has a 4,000mAh power pack, the LG G8 ThinQ's battery is rated at 3,500mAh, while the Xiaomi Mi 9 has a comparatively tiny 3,300mAh cell.

The Zenfone 6 does put its battery to good use. We measured close to 16 hours of web browsing over Wi-Fi or looping videos offline. In our testing the Zenfone was good for more than 36 hours of 3G talk time, which is also a lot. Adding the standby into the mix, we got an overall Endurance rating of 112h. 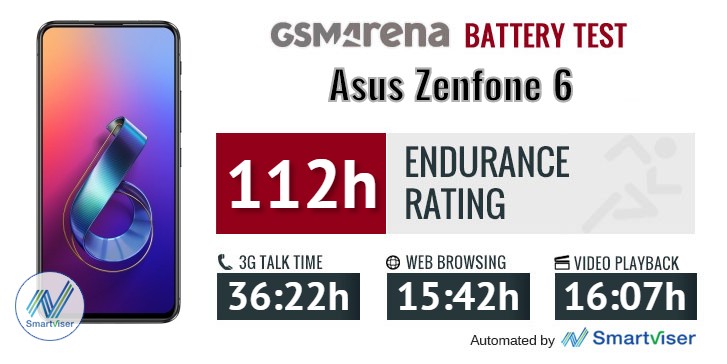 Our battery tests were automated thanks to SmartViser, using its viSer App. The endurance rating above denotes how long a single battery charge will last you if you use the Asus Zenfone 6 for an hour each of telephony, web browsing, and video playback daily. We've established this usage pattern so that our battery results are comparable across devices in the most common day-to-day tasks. The battery testing procedure is described in detail in case you're interested in the nitty-gritty. You can check out our complete battery test table, where you can see how all of the smartphones we've tested will compare under your own typical use.

For comparison, the OnePlus 7 Pro (if set to 60Hz) calls it quits 4 hours earlier when surfing the web, while it marginally outlasts the Zenfone when looping videos. The Mi 9 can do an hour more than the Zenfone in the video playback test (a total of 17 hours), but similarly fails to come close to the Zenfone's web browsing longevity (12:16h on the Mi 9). The LG G8 trails in the marathon race, with just 9:23h of web browsing and 11:09h of video playback. No high-end phone can remotely threaten the Zenfone's call time - the OnePlus 7 Pro comes closest at 34:24h, a good 10 hours short.

The Zenfone 6 supports QuickCharge 4 and USB Power Delivery. It comes bundled with an 18W QC4 adapter, which tops up a fully depleted battery in 2:32h, while a 30-minute charge takes you to 35%. Neither number is truly impressive, but let's not forget we're talking about a 5,000mAh power pack here. Using a Power Delivery charger from a Pixel phone (they are all the same across all three generations), we were able to shave off 9 minutes from the full charge time, and we got virtually the same charge after half an hour.

Asus was keen to point out that fitting any sort of faster charging solution would have meant a less dense battery, effectively resulting in either a thicker phone to achieve the same capacity or a smaller capacity (to the tune of 4,000mAh). Neither was acceptable so they went with the 5,000mAh and QC4 combo.

The Zenfone 6 has a stereo speaker configuration with a main loudspeaker on the bottom and the earpiece serving as the other channel in the pair. In landscape the phone switches the channels to match the orientation, while in portrait the earpiece is always the left channel. The dedicated speaker is louder, naturally, though it doesn't have a particular kick in the lows.

There's no shortage of decibels, however, and the Zenfone 6 easily scores an Excellent rating in our three-pronged test.

The Asus Zenfone 6 did very well with an active external amplifier - its scores fell slightly short of most other phones, but they are still excellent in general terms. The degradation caused by headphones was well contained too - stereo crosstalk rose to just above average, but the other readings remained solid.

Where the Zenfone 6 truly impresses is loudness - its volume is higher that just about all of its competitors, save for the Nokia 9 PureView, which it only matched. Good job, Asus!