Asus Zenfone 6 vs. Samsung Galaxy A80

We had in mind a comparison of the flippy cameras of the Samsung Galaxy A80 and the Asus Zenfone 6 ever since we knew of their existence, but something always got in the way of actually getting round to doing it. Fate intervened last week, however - a second, commercial-grade, Galaxy A80 review unit arrived at our doorstep, and a major software update was released for the Zenfone 6 - we figured this was as a good a time as any. 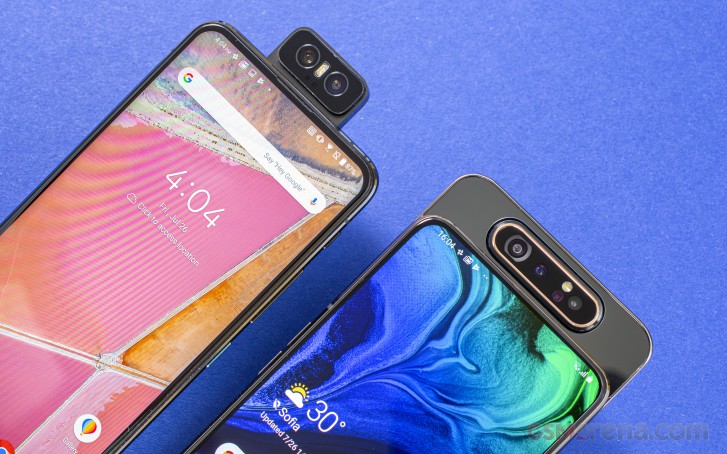 It's a weird match-up this, we admit. The Galaxy is a midranger at heart (read chipset), but a premium and a relatively expensive one. Meanwhile, the Zenfone is one of the most affordable handsets you can get with the top-dog Snapdragon 855 (okay, technically there's now a plus version to fly the Qualcomm flag, but still).

That's just one of the bits that sets them apart, and there's a ton more - the Galaxy has a nice 6.7-inch SuperAMOLED next to the Zenfone's more modest 6.4-inch LCD, Samsung's fitted an under-display fingerprint sensor while Asus has gone for a conventional capacitive one on the back, and the A80 is missing goodies like a headphone jack and a microSD slot, both present on the Zenfone.

Ah, but the flippy cameras - both phones have them and those are what we're here for. A byproduct of the push for bezelless phone designs, motorized solutions started popping up to deliver a front facing camera without unsightly display cutouts. Cool-looking workarounds, If you ask us. They do it differently, these two, and we'll go over the pros and cons of the two approaches on the next page, where we'll also take a closer look at the camera specifications and specifics.

Before that, a quick refresher on the key hardware you'd find on the Galaxy A80 and the Zenfone 6. 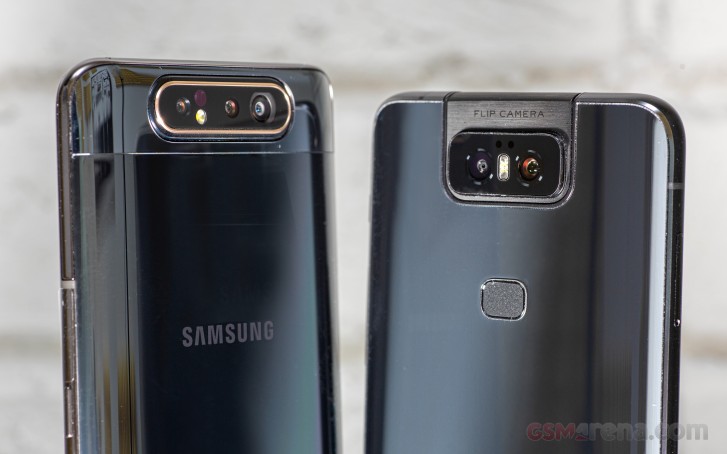 We'll try to keep this quick and to the point, so there won't be much in the way of design, hardware or software outside of the camera context - less talk, more samples. Still, we'll be kicking off with some talk on the next page.

Could you use better English, that was almost unreadable. Go for the 1+ though.

I will always go for the asus It's the best👍

I need phone A80 sumsung galaxy