While other makers try to one-up each other with specs, Asus has created two phones that stand out with their designs. One is notable for its size – it’s the smallest Android flagship currently – the other carries on that flip-up camera magic of its predecessor.

The petite flagship has a 5.9” AMOLED display (Samsung E4) with 1080p resolution and a 20:9 aspect ratio (which makes it shorter than the Xperia and its 21:9 screen). In terms of protection, the phone has Gorilla Glass Victus on the front and an IP68 dust and water resistance rating (this is Asus’ first phone with an IP rating, believe it or not).

The panel has 120Hz refresh rate and 240Hz touch sampling rate. It is HDR10+ certified, covers 112% of the DCI-P3 color gamut and comes with well-calibrated colors. It’s quite bright too, with a peak of 1,100 nits. The fingerprint reader is built into the display.

On the back there is a dual camera with a 64MP sensor – the same IMX686 as used on the Zenfone 7 generation. It has 0.8µm pixels and a Quad Bayer filter an Dual Pixel Autofocus.

Asus equipped the little Zenfone 8 with some serious audio hardware. It has a 3.5mm audio jack, two linear speakers with dual Cirrus Logic mono amps (CS35L45) and Dirac HD Sound support. The Audio Wizard app will let you tinker with the equalizer (this is one of those mindful improvements). There’s an FM radio receiver, but it is disabled in the EU.

The USB-C port supports 30W HyperCharge for fast and safe charging (Quick Charge 4.0 and USB Power Delivery PPS are supported as well). The port is wired for only USB 2.0 connectivity, however.

On the wireless front things are much better. There’s 5G with multiple bands supported (there is a USA and a worldwide version of the phone). The latest Wi-Fi 6E is supported as is Bluetooth 5.2 (with aptX Adaptive). The phone has a dual nano-SIM slot, but unfortunately no microSD slot.

Asus offers the phone with 128GB and 256GB storage, with three RAM options – 6GB, 8GB and even 16GB. There’s a Smart Key on the side which can be configured to trigger three different actions (it’s the blue button on the side). 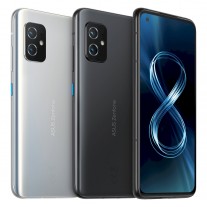 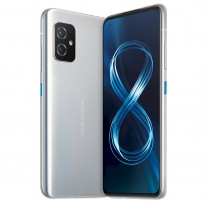 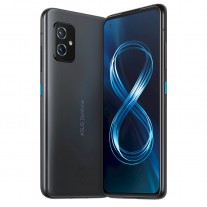 The Asus Zenfone 8 is already available in Europe and Taiwan (the Black one at least, the Silver one is on pre-order). The early-bird price is €600, but it will go up to €670 at the end of the month. The phone will be available in other regions too, more details soon.

The name says it all – the Asus Zenfone 8 Flip is defined by its flip-up camera. It’s a triple camera that adds a 3x telephoto lens to what the smaller phone has to offer. There’s no front camera as such, of course, the key selling point here is the blemish-free display and the ability to shoot selfie photos and videos with the main and ultrawide cameras.

The Flip is also powered by the Snapdragon 888 chipset. It comes with 8GB of RAM and either 128GB or 256GB of UFS 3.1 storage. This one has a triple card slot with a dedicated spot for a microSD.

This is essentially an S888 refresh of the Zenfone 7, the rest of the spec sheet is basically identical. The 6.67” AMOLED display has the same 1080p+ resolution (20:9) and it runs at the same 90Hz refresh rate (200Hz touch sampling rate) and it has the older Gorilla Glass 6. It’s not as bright as the Zenfone 8 display (it tops out at 700 nits), but it boasts the same HDR10+ certification and excellent color rendering.

One change here is that the fingerprint reader moved from the side to under the display. The phone still has a Smart Key, which can trigger three custom actions with a single, double or long press.

The triple camera is the same too with a 64 MP IMX686 main sensor (note that it lacks OIS). The 12 MP IMX363 sensor in the ultra wide module is the same too. As is the 8 MP OmniVision sensor in the telephoto camera. As before, it offers 3x magnification (80 mm focal length) and up to 12x digital zoom.

The main camera can record 8K video at 30 fps as well as 4K at 60 fps, plus HyperSteady video. The ultrawide cam tops out at 4K/60fps, while the telephoto module offers only basic 1080p/30 fps recording. The camera trio is guarded by Gorilla Glass 3.

The 5,000 mAh battery with 30W HyperCharge is unchanged as well (with QC 4.0 and USB-PD support). The wireless connectivity does benefit from the new chipset, with Wi-Fi 6E support. For audio there is aptX Adaptive (the 7-series had it too).

The Flip may lack a 3.5mm headphone jack, but it does have stereo speakers with dedicaed NXP mono amps (TFA9874) and a Hi-Res Audio certification. The speakers were tuned by Dirac Research, just like the ones on the ROG Phone.

The Asus Zenfone 8 Flip can be pre-ordered in Europe and Taiwan later today starting at €800. You can find it online on asus.com, availability for other regions will be announced soon. 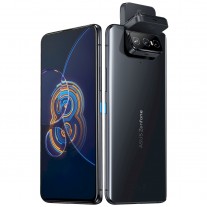 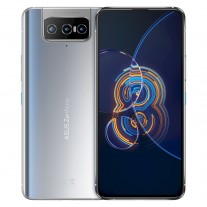 The phone comes with a 30W charger in the box, as does its small sibling. This one also gets an Active Case – a protective case that can lock the flip mechanism in place to keep it from opening when the phone experiences heavy vibration.

Yeah, totally haha. Like you have the money to afford a 4k tv lol. Are you that commited to dunking on apple that you're gonna buy a 4k tv to do so?

Did you see those images on twitter or Instagram? Coz I did on my 4k TV on YouTube. IPhones was the worst which is why It lost to OnePlus 8t with IMX 586. OnePlus had better image processing.... IGarbage as usual beneath Android