Asus is expected to bring its Zenfone 8 series soon in no less than three sizes according to the latest rumors. The smallest device of the bunch will be the 5.9-inch Zenfone Mini (ASUS_I006D) and the phone was now spotted in the Geekbench database. 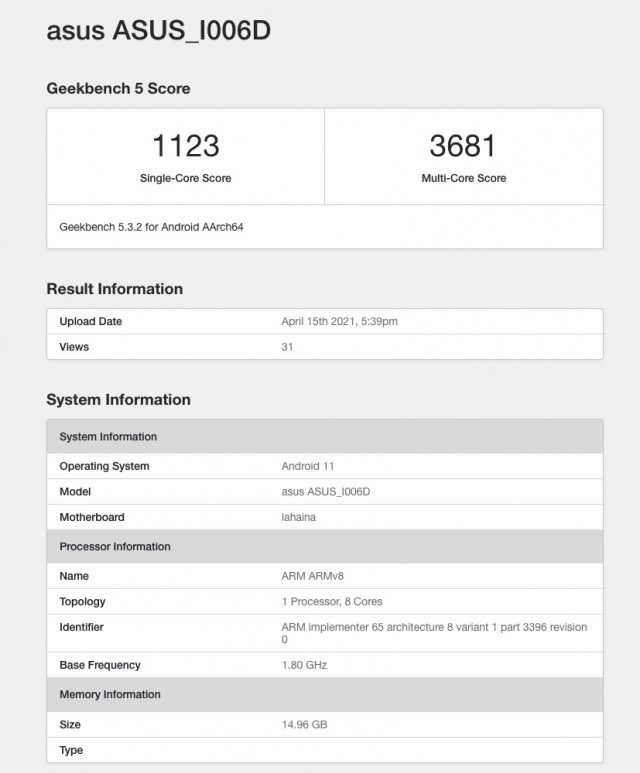 The Zenfone 8 Mini is powered by the Snapdragon 888 alongside 16GB RAM and managed impressive scores of 1,123 in the single-core department and 3,681 on the multi-core thread. Based on previous rumors, the Zenfone 8 Mini will feature a 64MP Sony IMX686 main cam alongside a new Sony IMX663 module. The phone will also bring 30W charging.

All Zenfone 8 series phones are expected to pack OLED displays 120Hz refresh rates and FHD+ resolution. The Mini will be joined by the Zenfone 8 Pro (ASUS_I004D) as well as Zenfone Flip which could be the only device to retain the signature flip-up camera of the previous Zenfone series.s

I like the look of this but I think it may be expensive. SD 888 means at least £700 I would think. The Pixel 5 (then 6 in the autumn) are the only two other phones I am thinking about to replace my Essential PH1.