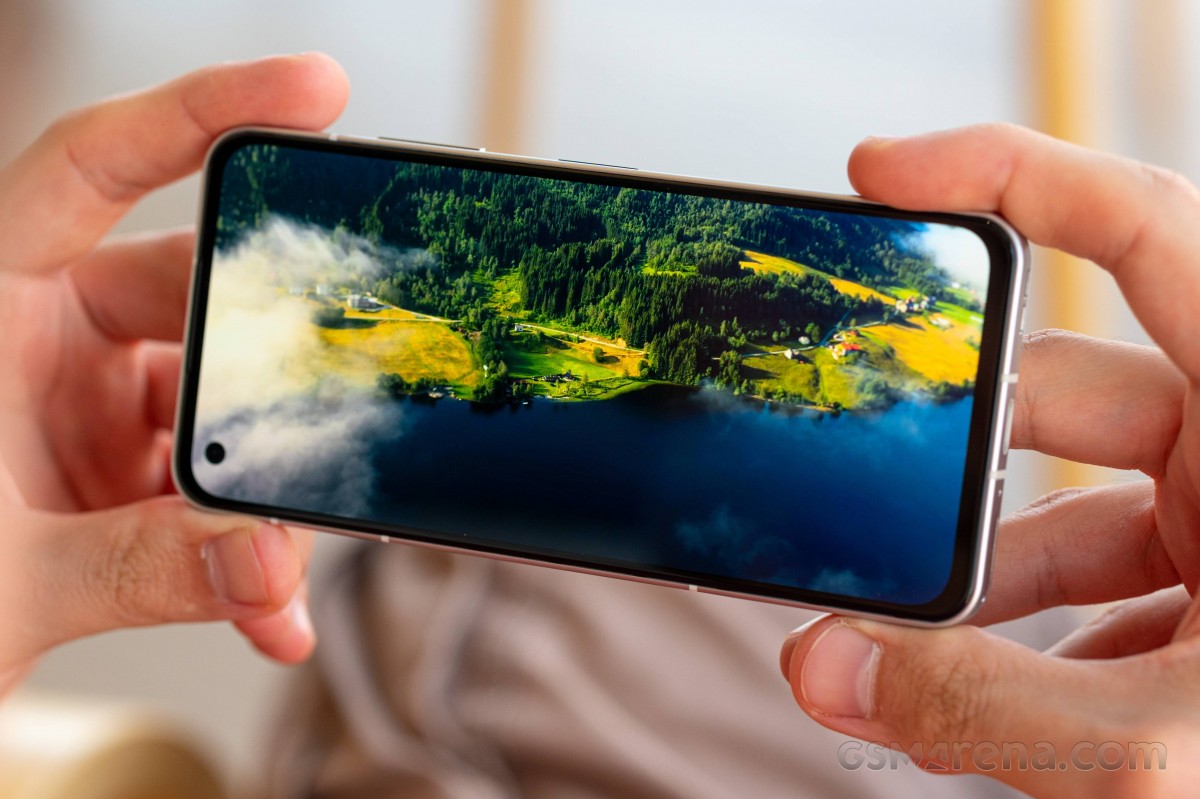 A Samsung-made AMOLED panel, the one on the Zenfone can refresh at up to 120Hz, but it's missing more advanced adaptive refresh rate functionality and can only switch between 120, 90, and 60Hz. Touch sampling is rated at 240Hz. The display supports HDR10+, too. DC dimming is also on the list of features if you're particularly susceptible to pulse-width modulation, though it's only available at 60Hz refresh rate.

Asus press materials promise 800nits of maximum brightness when displaying white full-screen and 1100nits of peak brightness (for small patches of screen when displaying HDR content), while our standardized test pattern takes up 75% of the screen and yielded 830nits. That's in 'Outdoor' mode, so to speak, or rather when the phone is under bright ambient light, and the adaptive brightness toggle is on. With the toggle off and the slider maxed out, we got 449nits.

Those are slightly higher numbers than last year's model and more or less in line with the competition. The Galaxy S22 does almost reach 1000nits when under bright light, while all of the iPhone 13's 800-ish nits are available in manual brightness mode too, but ultimately the Zenfone 9 isn't strapped for nits.

In the 'Splendid' menu item in settings (which isn't terribly intuitive if this is your first time with an Asus) you get 4 preset color modes with an additional temperature slider, plus an extra 'Customized' mode with its own slider that essentially controls saturation.

All modes but Standard cover a wide gamut, while Standard is tailored for sRGB content. Standard got us an average dE2000 of 2.5 - not the best, but not terrible. Cinematic mode was similarly accurate for DCI-P3 content (another 2.5 average), while the default Optimal mode and the extra colorful Natural mode weren't as accurate.

The Zenfone 9's HDR10+ support got us HDR streams on YouTube and Netflix, but we didn't see it kick in on Amazon Prime Video. 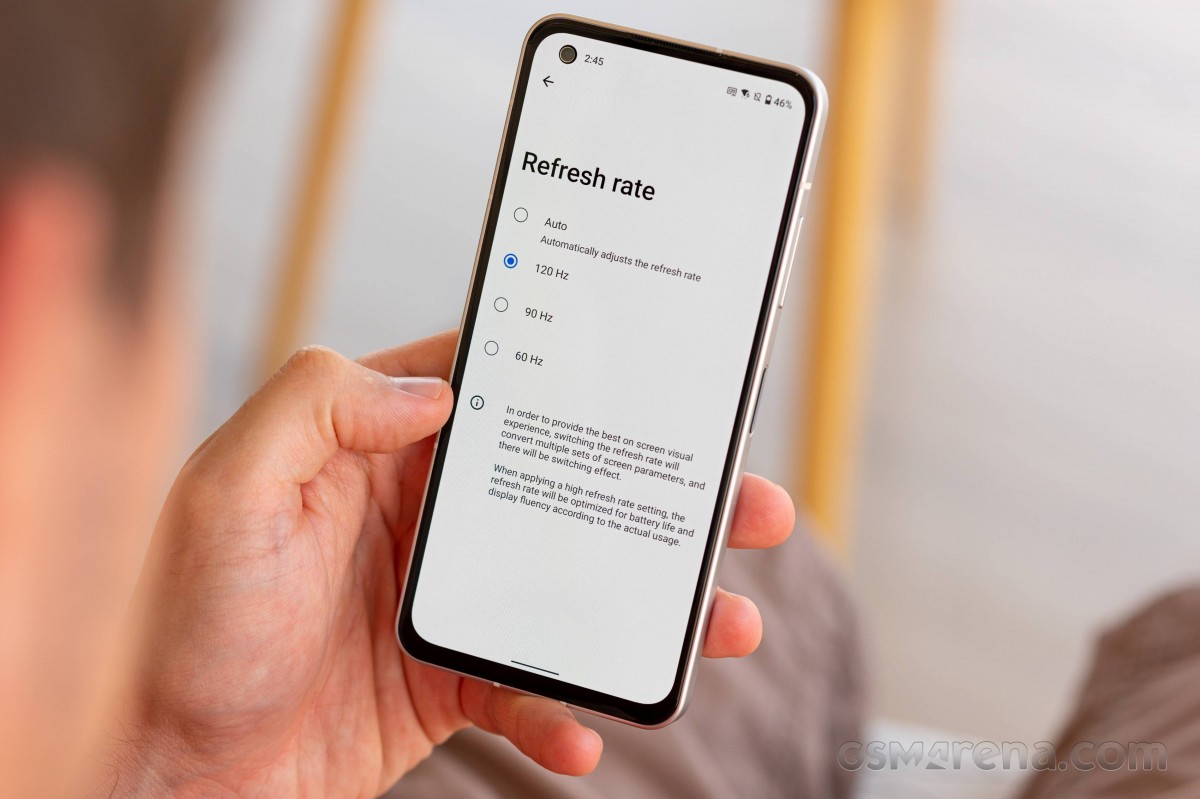 The refresh rate settings let you choose between four modes, with the Auto enabled by default and settings for 120Hz, 90Hz and 60Hz. The 60Hz and 90Hz modes do lock the refresh rate at the respective setting, and that second bit was a little surprising - we sort of expected the 90Hz mode to drop to 60Hz when idling, but that wasn't the case.

As usual, there are layers upon layers of logic in which refresh rate is active if you're in the Auto or 120Hz modes. Interestingly enough, the Auto mode will tend to maintain 90Hz most of the time, with no dropping to 60Hz and only shooting to 120Hz for games that support high frame rate (and, by extension, benchmarks).

The 120Hz mode will maintain the nominal refresh rate when you interact with the phone but will switch down to 60Hz when idling. Unless that is, you're in the 'High performance' system mode in battery settings, which locks the refresh rate at 120Hz for everything (in addition to the other things that mode does). If you're under a certain brightness threshold, there will be no downswitching, regardless of battery mode.

High frame rate gaming is possible on the Zenfone 9, and from the Game Genie utility, you can switch the refresh rate irrespective of the global setting, and you can get a frame rate counter as well.

The Zenfone 9 packs a 4,300mAh battery, a 300mAh increase over the predecessor's capacity that the company is (rightfully) very proud of. Compare that to the Galaxy S22's 3,700mAh or the iPhone 13's 3,240mAh, so you can appreciate the Zenfone's achievement.

The increased capacity coupled with the new and more efficient chipset led us to expect solid endurance from the handset, and it delivered, indeed. In our testing, the Zenfone 9 was good for 26h of voice calls, 15h of web browsing (at a variable 120Hz-60Hz) and over 17h of video playback (at a constant 60Hz). The overall Endurance rating worked out to 108h - a class-leading result for a compact high-end phone. 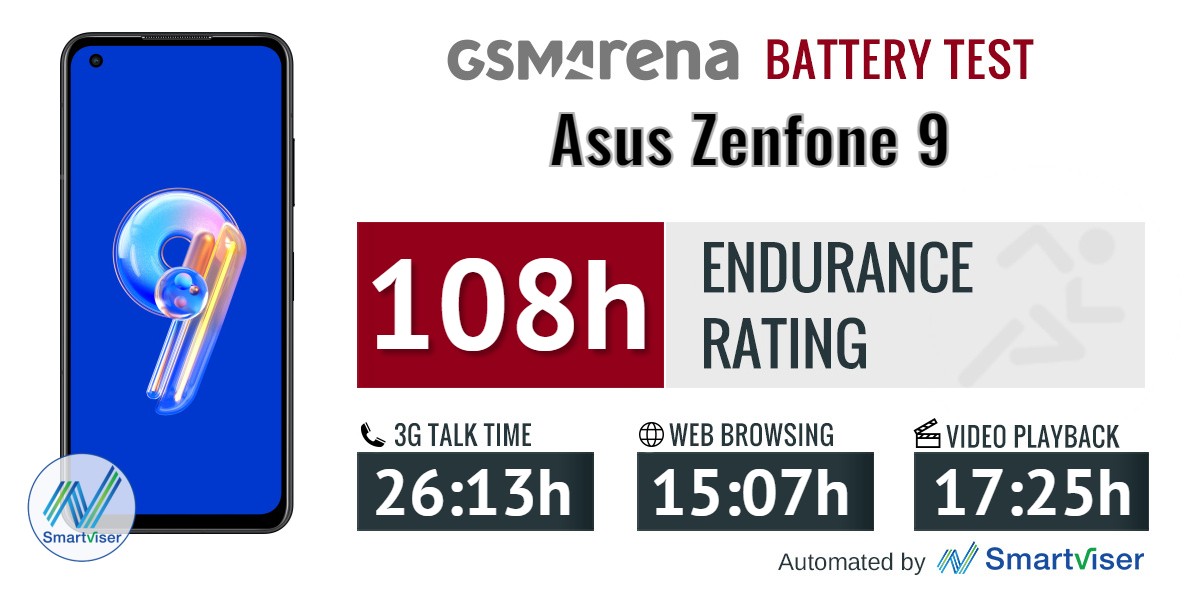 Video test carried out in 60Hz refresh rate mode. Web browsing test is done at the display's highest refresh rate whenever possible. Refer to the respective reviews for specifics. To adjust the endurance rating formula to match your own usage - check out our all-time battery test results chart.

There are several variables that might affect those results one way or another, and one of them, in particular, we'd like to point out - the High-performance system mode in the battery settings. It locks the refresh rate at 120Hz, so it may be more taxing on the battery than the normal auto-switching behavior we observed in Dynamic mode. However, it's not the default mode on the phone (Dynamic is), plus the 120-60Hz is closer to real-world usage. Besides the refresh rate, we can't be certain what else is changing under the hood.

The Zenfone 9 is bundled with a 30W adapter that Asus brands Hyper Charge. They like to point out it's the most powerful adapter in a phone with a display smaller than 6 inches, which is somewhat of an odd metric in a world where there simply aren't all that many phones this small. It's a USB Power Delivery 3.0 compliant unit with PPS support, and in our testing, the transferred power peaked at 28.5W, which we'd say is pretty solid. 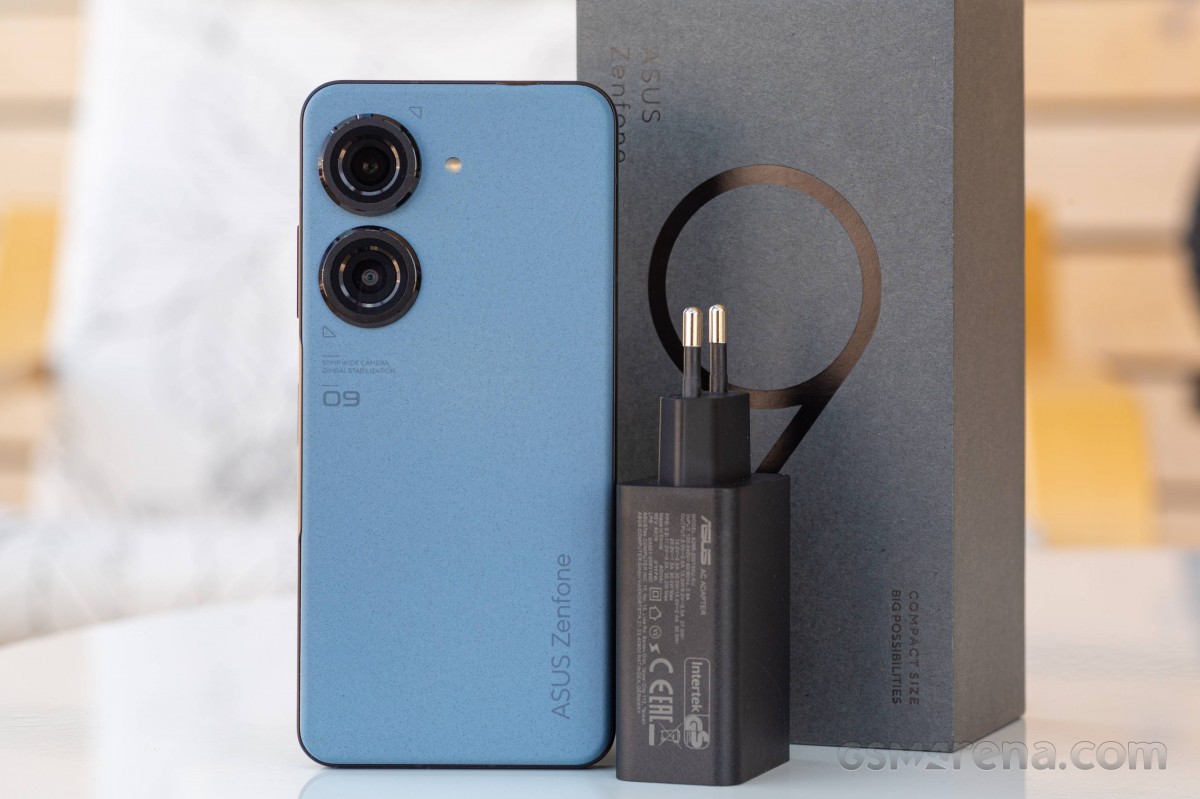 The Zenfone 9 took 1:15h from flat to full, with the battery indicator showing 57% at the half-hour mark. These aren't exactly game-changing numbers, but it's a decently fast performance and about as much as you can expect from 30 watts of USB Power Delivery with a battery of this capacity.

The Galaxy S22 is a bit quicker, but its battery is 600mAh smaller, while the iPhone 13 is slower than the Zenfone when using a standard 20W Apple adapter. The Xiaomi 12, meanwhile, charges notably faster with its proprietary 67W solution.

There are a few features in the charging department meant to increase the battery's lifespan in the long run, grouped under the Battery Care menu item in settings. One of them is Steady charging, which charges the battery at a flat rate instead of the usual 'super fast in the beginning, way slower at the end approach. There are two levels to it, and the base Steady charging works at 18W, while the Ultra Steady drops that to 10W, when using the supplied 30W adapter (that goes further down to 12W and 9W respectively, if you have an 18W PD charger).

There's also Scheduled charging which ensures that the battery will stay at 100% the minimum time by doing the final stages of the process just before your alarm goes off or before a predetermined time. 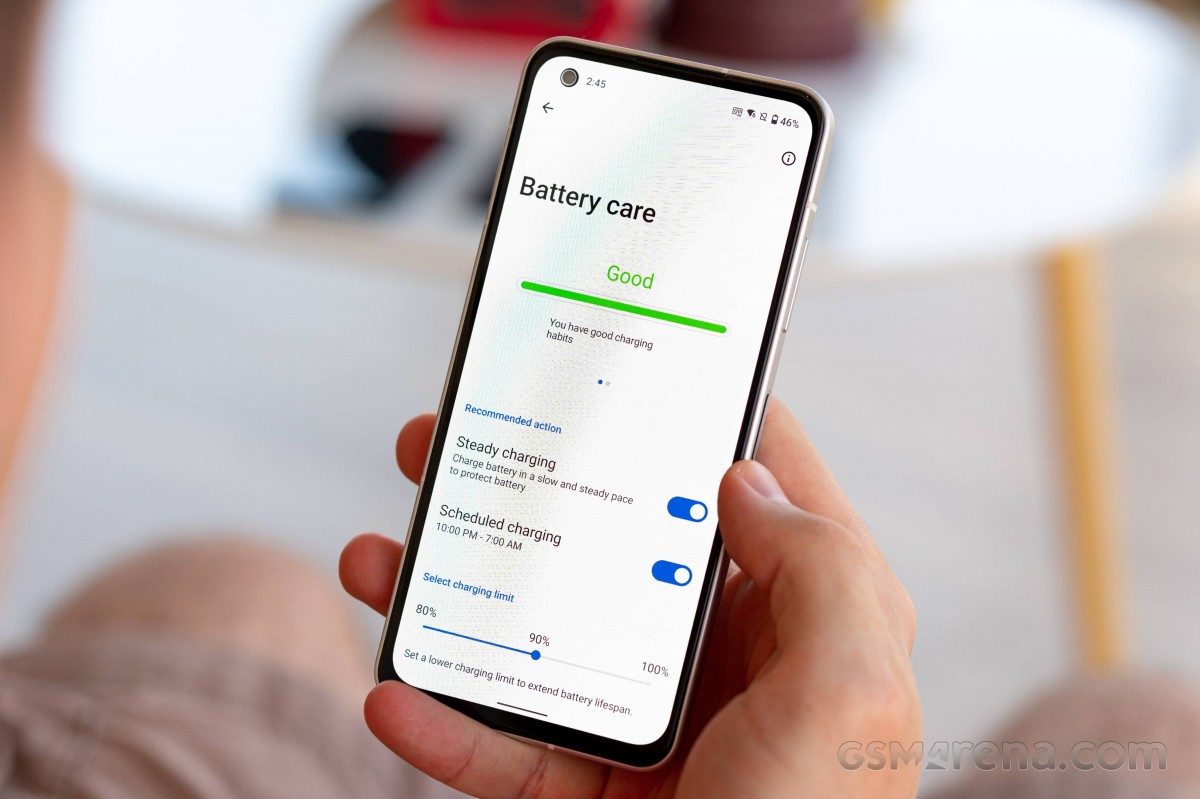 Alternatively, you can set a ceiling to the state of charge of 80% or 90%, so your battery doesn't have to spend any time at that 100% level which Lithium-Ion batteries don't feel too well at. Asus's testing indicates that after 500 charge cycles with the 80% limit, the battery will have only lost 7% of its initial capacity, compared to 15% if you let it go all the way up to 100%. It's useful if you like to keep your phone for as many years as it will last and/or if you're a habitual overthinker. You just need to switch it off for those unusual tourist days when every mAh counts.

There's no wireless charging on the Zenfone 9. Adding the induction coil would have increased thickness further, making the handset more of a chonker, or it would have eaten into the battery capacity, and neither was an option.

The Zenfone 9 has a stereo speaker setup with one bottom-firing unit and another front-firing one at the top which also moonlights as an earpiece. Asus reveals that the bottom speaker measures 12x16mm while the top one is 10x12mm, and each is powered by its own dedicated Qualcomm Aqstic WSA8835 amp. The two speakers do switch channels depending on the phone's orientation in landscape, while the top one gets the left channel when in portrait.

Asus has collaborated with Swedish sound researchers at Dirac for some tuning magic, which they say helps enhance the perceived bass response. We're inclined to agree that it has worked, as the Zenfone 9 does sound a lot bigger than its dimensions would suggest, including in the low-frequency range. Vocals are nice and clear, and the treble is also well reproduced. It's definitely a better-sounding phone than the Galaxy S22, and about on par with the iPhone 13.

When it comes to loudness, the Zenfone 9 scores a 'Good' rating in our test, its numerical result slightly better than the older model's. The S22 is roughly as loud, the iPhone 13 is a bit louder. If you want extra loudness, the Zenfone 9 does have an 'Outdoor' mode that pushes the LUFS number to 22.3, earning it an 'Excellent' rating, though that's, of course, at the expense of absolute sound quality.

good pick-up as I found also that most sites relate to 2 android updates/2 years ... and while your at it @gsmarena; what does "Daylight samples from the Zenfone 9's main camera have great global properties" actually mean in relation...

Android update status of this phone?