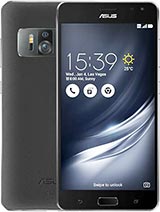 Why the opted for snapdragon 821. would have been better if the go for snapdragon 835.
And this 8 gb ram is nothing but a gimmick. Not even a crazy multi-tasker need that much ram. or asus want to be the first to do any such kind f thing like sony does in xperia z5 by introducing a 4k display .

Anonymous, 08 Jan 2017The cheaper Zenfone 3 Zoom packs in a decent 5000mah and th... morebecause making a perfect phone means no one will buy the another one when they release next year. not maybe no one but many wont

The cheaper Zenfone 3 Zoom packs in a decent 5000mah and the flagship AR a measly 3300mah? Why don't phone makers go all out on all fronts, why make an otherwise great phone average by limiting one of its specs. Stupid.

It seem no fingerprint sensors, what a pity..

guys... what you mean... this camera vs galaxy s7 or upcoming s8... i mean this looks nice but can asus outperform today's flagships in terms of camera? i know that xiaomi oneplus and meizu cant be compared with G5 V20 S7 Mate9 but i dont know much about asus camera's

Anonymous, 07 Jan 2017This phone is going to ride the waves of flagship devices. ... moreThis isn't going to ride anything as they never come to market on time

Available "Q2/2017". This is unlikely as Asus usually ships everything late. They don't also have global launches, but trickle-launches: Taiwan first, China second, etc...
It has only a 3300 mAh batter. That is way too small for hyper-clocked SD821/8GBRAM/QHD display. 4000maH minimum would have been great. Also, Asus just absolutely blows chunks for OS updates in terms of frequency and speed.
Other than that, great phone (although shame about the vintage 2016 SoC SD821, when SD835 is available in Q2/2017).

This phone is going to ride the waves of flagship devices. Great specs. Asus is going to compete the flagship phone market. People here talking about why Asus is not putting 5000mAh battery in this phone. Actually, there is no need of that because it has snapdragon 821 processor that is why 3000mAh battery is enough for one day use. The camera implementation is great. It looks odd a bit just because of 3 camera lenses are used in this device and also AR censors. Above all the best thing about the phone is that it is not very much heavier as the official announcement says it is only 170gms heavy. The phone looks like monster. Its look isn't girlish but those who condemn its looks are used to phones which look girlish. If you hold this device you must have a James Bond like feeling.

When it will be available in market ?

Well I think the old school Nokia n-series design is back. In kinda good way

I like the snapdragon821, but835 is coming soon. Btw the back camera look sooo ugly..