The Asus Zenfone Selfie has got to be the company's most straightforward attempt at product naming. Sure, it does have the mandatory 7-symbol alphanumeric model string at its tail, which means zip to the uninitiated, but unlike the piles of different Zenfone 2's, in this case a simple Selfie will suffice to describe the specific model.

The title does well to advertise the smartphone's headline feature and in person the handset isn't shy showing it off either. Selfie could very well come before Zenfone with this one, as the front 13MP shooter has pushed the earpiece out of its customary central position. 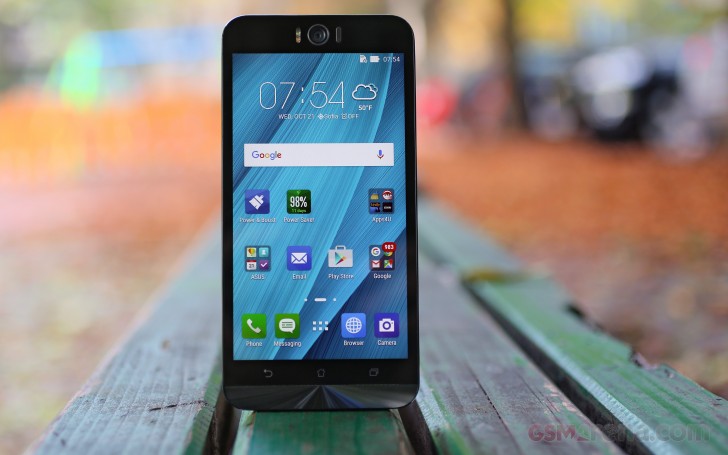 A dual-tone front facing flash further emphasizes the device's priorities and is a bit of an exclusive feature. Setting aside rotating camera trickery like on the Oppo N3 and Honor 7i, you'd be hard pressed to find a smartphone with more than a single LED to shine at your face. The HTC Desire Eye is one, the only one perhaps.

At this point you'd be forgiven to think that the Zenfone Selfie is a one-hit wonder, but you'd be wrong. It can take on most any midrange competitor - after all, in 2015 the majority of those are equipped with the same Snapdragon 615 chipset anyway. Up to 3GB of RAM, a 5.5-inch FullHD display and a 13MP primary camera mean that the Selfie won't be shorthanded against all but the best-equipped rivals.

For the record, the model number of the Zenfone Selfie is ZD551KL. We have here the version with 3GB of RAM and 32GB of storage, and there's a lesser 2GB/16GB option and surprisingly, both share the same model number. We're not big fans of the concept that the two numbers should be interdependent, but let's say that it allows for a more affordable base model, and that's a good thing where the Zenfone Selfie is positioned.

We are happy that the Zenfone Selfie has a few features, which are slowly going into oblivion in the high end segment. The smartphone takes microSD cards for expansion, and it also has an easy-to-access swappable battery - batteries on Zenfone 2's have so far been guarded by a dozen screws despite the misleading removable back.

So as you see, the Asus Zenfone Selfie is an intriguing handset and we all but ready to put it through our customary review routine, with unboxing and hardware overview first up on the next page.

this is the worst phone i have ever seen with cost of 14000 Rs. (at launched time) except camera department all other is dump.....it does not mean that camera is very good at all, picture quality is fab..but processing time is very poor...and custome...