The BlackBerry Motion's packaging radiates that whatever is inside really means business. The box is just as rectangular as many other smartphone packages, but this one the iconic BlackBerry logo embossed all over it, which acts as the graphic background. It almost reminds us of something made of black alligator skin.

An image of the phone adorns the front of the box with the words "Secure Smartphone" written underneath - boasting the company's long-standing reputation for smartphones fit for handling sensitive information with enterprise management.

Under the sleeve is a plain matte black box with a magnetic flap that opens to the left like the front cover of a book; under this flap is the BlackBerry Motion itself. We'll place this aside for now and take a look at the document pack: a welcome card, quick start guide, and warranty information. On the back of this packaging is a SIM tool.

Included in the box are a USB-C cable and a generic 15W (9V @ 1.67A) quick charger. We say "generic" because there is no kind of branding on the charger block. Otherwise, there are also a pair of included earbuds and some additional ear tips in different sizes. These earbuds are branded with the BlackBerry Logo on each bud.

Now that we've seen what comes in the box, let's take a closer look at this BlackBerry's hardware.

The BlackBerry Motion is not quite the bezel-less contender. Then again, it doesn't need to have a fragile display to appeal to its target audience. That said, the BlackBerry Motion's overall design features bold details and straight lines. Because of this and it's mostly flat backside, the Motion doesn't feel very ergonomic. Those with small and medium sized hands might feel that the lower corners dig into the palm - this isn't a major issue by any means.

The screen isn't centered between the top and bottom of the phone's body, but this isn't something that the average person would be bothered by. However, given that the BlackBerry Motion is equipped with mid-range internals with a pretty high asking price, there's not much wiggle room for shortcomings. 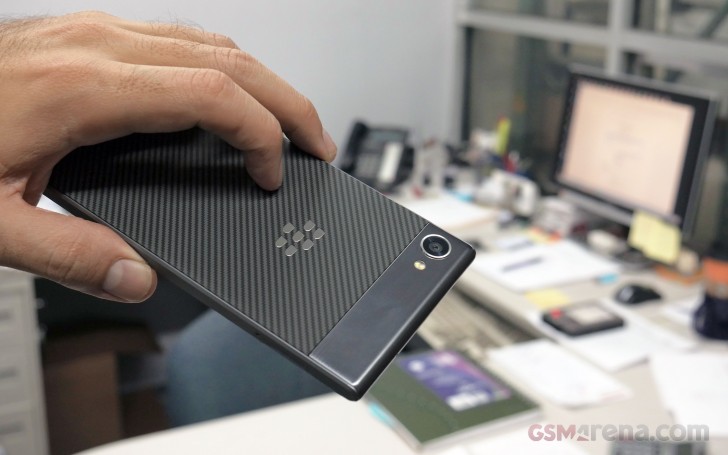 Unlike many other blank-faced smartphones, the BlackBerry Motion can be immediately recognizable if it's sitting face-up on a table or desk. The BlackBerry icon lives right on the fingerprint scanner below the display, which doubles as the home button. Though you can't tell while the phone isn't in use, there are two back-lit capacitive navigation keys on either side of the home button.

Above the display is a metal-clad speaker grille, an 8MP selfie camera, light and proximity sensors and an RGB LED notification light. The glass in front of the display is said to have a scratch-resistant surface thanks to the world's first "nano diamond anti-scratch coating".

As previously mentioned, the sides of the phone are quite flat - enough to make the phone stand on its bottom edge fairly easily. From left to right, the bottom plane has a 3.5mm headphone jack, in-call mic, USB-C charger port, and loudspeaker grille.

The bottom continuously curves to either side of the phone. On the left side is the SIM tray with a nanoSIM and microSD slot while the right side has four physical keys. In typical BlackBerry fashion, there is an additional programmable key which BlackBerry calls its "Convenience Key". This key is ribbed to tell it apart from the power key and volume rocker. Speaking of which, the keys offer great tactile feedback.

On a similar note, we really appreciate that BlackBerry brought the power button back to the right edge of the phone. By contrast, the power key is on the left edge of the BlackBerry KEYone and it took a bit of getting used to.

The frame that wraps around the phone is made of sort of a gun-metal color that is brushed all the way around and shines beautifully when light hits it from the right angle.

We do have to give BlackBerry the benefit of the doubt for going with plastic as opposed to metal. This would have required unsightly antenna lines to allow RF signals to pass through. There are two small antenna lines on the bottom and that's enough for us.

Right in the middle of the back, is the classic BlackBerry logo highlighted by shiny chrome. In much older BlackBerry phones, this logo was made up of small inserts held in with adhesive. It would appear the BlackBerry Motion takes a similar approach with this logo, so there's a plausibility these could fall out over an extended amount of time.

The overall design of the BlackBerry Motion can be summarized as a boxed-off slab with rounded corners, much like the iPhone 4 or iPhone 5. The exception is the top end, which has some different curves going on. We like the clean and tidy lines of the Motion. It has a bold, yet reserved and sophisticated look. Oh yeah, and the phone is also IP67 water resistant.

Read on to find out more about the phone's display and battery life. With a 4,000 mAh battery and efficient Snapdragon 625, we're expecting nothing short of excellent endurance.

Where can we buy BlackBerry phones in Namibia?

I've owned many BB devices before until BB Priv. Like many BB fans, I have wished for higher end devices but never get ones nearly half decent. It's time to ditch BB for others, especially BB devices are no longer made by BB. It's sad to see the home...