Back in Black... Berry

The BlackBerry Storm2 9520 can handle all common types of messages - SMS, MMS and email. It also has the BlackBerry instant messenger preinstalled.

The Storm2 has a fairly simple and easy to use organization of messaging and all messages are composed through a common editor. The good news is that version 5 of the OS also introduces threaded messaging to help you organize your inbox even better.

It's about time we discussed the text input methods available on the Storm2 in more detail. The handset offers a choice of three different keyboards and we did find them all quite pleasing. Those are the same as on the previous Storm, except that now that less effort is required to push the screen your fingers are less tired of long typing.

Let's start though with the regular multitap keypad. Its predictive writing works much better with the touchscreen because you can easily select the word you're looking for from the suggested options. That aside, it works as good as any other multitap keypad, only the keys are even larger.

It's multitap for the traditionalists...

The good old BlackBerry SureType keypad is already making its way on several other platforms and that's for a very good reason. It's easy to use and if you master the AutoText (that's the BlackBerry T9) you might as well match the QWERTY typing speeds at times.

...SureType for the BlackBerry faithfuls...

The nice thing is users are free to choose whether the SureType or the multitap keypad should appear by default in portrait mode.

There's also a portrait QWERTY keyboard but we don't think it will be a very popular option. Its keys aren't big enough for large handed users and if you really insist on the QWERTY layout you would do way better tilting the handset to the side and getting the real keyboard experience.

...portrait QWERTY for the ones with really small fingers...

OK, we said it: the real keyboard experience. The landscape QWERTY takes slightly more than half the screen height and comes in a four-row layout. Keys are large enough and with the display sinking on every press you can really speed your way through tons of text. The feedback provided is both visual (blue halo when a key is touched) and physical and with the two combined you get excellent results.

... and the real deal - the landscape full QWERTY keyboard

In general, this is a virtual QWERTY keyboard but it gets as close to a regular press as we have seen. What's more, it's less tiring on the fingers as the phone itself helps you push the screen - the piezo-electric technology works like power steering in cars.

So far so good with the BlackBerry messaging department - the handset behaves beautifully when it comes to text input. Now the catch: out of the box you can only set up BlackBerry Internet Service email accounts on the Storm. This means that without a proper Blackberry service plan the handset is just a plain email-less device and globally there are quite a lot of carriers that do not support BIS yet.

Music player does the job

The BlackBerry Storm2 9520 music won't get too many wows for its looks but it does a fairly decent job. If you are mostly about listening to music and not really into fiddling with different player options then you might feel just fine with it.

There're equalizers too and different appearance settings this time

Album art is also supported and there is a single track repeat option. Quite naturally, the player can also be minimized to play in the background. You can then go back to it via the task manager or the main menu. Strangely enough, there's no indication of the currently playing song on the home screen.

The BlackBerry Storm2 9520 has virtually identical audio quality to its predecessor and that is as high as we have seen the BlackBerries go. The handset performs well in every aspect of our test and goes pretty close to the best on the market. It didn't break any records but the great overall performance is more important here and the Storm2 managed to deliver it.

The phone boasts a really good frequency response keeping on perfect track for most of its range. The rest of the readings are also excellent with great noise level and dynamic range and distortions kept well within standards. The stereo crosstalk reading is quit good. All in all, you will be enjoying some fine sound with BlackBerry Storm 9520. 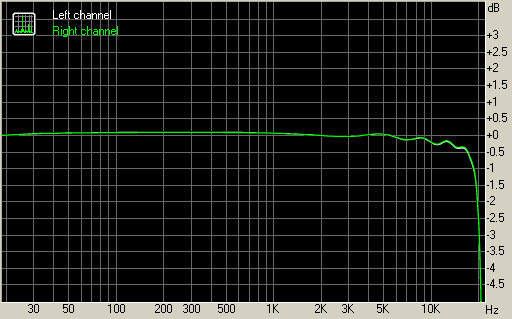 Only we don't like is the battery.It dead very fast.