The Torch 9800 music player comes with a slightly polished interface, but basically identical functionality to its predecessors. Don’t expect to be totally wowed but it does a good job.

The music player got a visual update as well

Album art is also supported and there is a single track repeat option. Quite naturally, the player can also be minimized to play in the background. You can then go back to it via the task manager or the main menu. Strangely enough, there's no indication of the currently playing song on the home screen.

There are other options such as equalizers and audio boost though so we don’t think one has many reasons to frown at the Torch music player.

The BlackBerry Torch 9800 did very well in our traditional audio output quality test. When attached to an active external amplifier (i.e. your car stereo or your home audio system) the device is next to perfect with the cut-off extreme bass frequencies the only thing to frown at.

When headphones come into play, the BB Torch remained a pretty solid performer and the only things that suffered were the increased stereo crosstalk and intermodulation distortions. Plus the Torch is decently loud so we are happy to give it an excellent mark here. 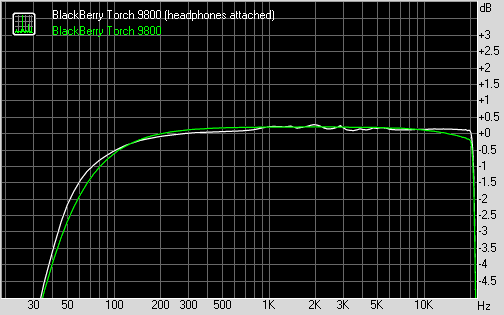 Watching videos on the Torch 9800 is hardly a thing to write home about. The experience is just about average in every single aspect.

The video player does a decent job

The interface is simple and functional. Converting videos all the time is not really our cup of tea so we appreaciate the fact that the Torch supports DivX and XviD. Mind you the handset played correctly only about two thirds of the videos we threw at it so unpleasant surprises are to be expected from time to time.

On the other hand the resolution and contrast of the screen don’t allow the videos to show their true potential and the video browsing interface, while not terrible, is not much of a looker.

It was good while it lasted. Bragging rights are gone, it's weak compared to the most cheapest touch screen phone out there. The resolution is chump, the design is a tad crikey. My Torch, while it still works - is obsolete. no support. no apps woul...