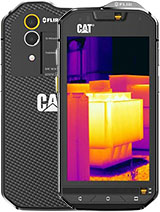 Take notes Apple, this is TRUE innovation. While this phone will have a small dedicated market of individuals that will find its features useful. It goes to show there are companies willing to push the envelope and make phones with features most of us would have never even considered. I know I never saw a phone like this coming. Way to go CAT!

People keeps bragging or complaining about the specs of each phone that is about to came out. Why not just appreciate the innovation of this new phone huh!? This phone is sooo manly. Very good for outdoor activities and for "sight-sseing" :-p..haha.. I hope it will come out soon here at Philippines. Good for watching live "room-actions"...wahahahahaha.. deym... better yet get a new performing girlfriend..lol

Guilherme Santos, 18 Feb 2016I´d buy it for sure. It´s a MAN phone. Sturd... morethis phone is also an Android kid

I´d buy it for sure.

It´s a MAN phone. Sturdy as hell and with nice hardware.

This thing has FLIR thermal imaging! Absolutely insane! And having a snapdragon 617 on this 720p phone will make for some awesome frame rates on games.

This has just become my no.1 want on my smartphones list. Look at all of that beauty... now what CAT is just missing is a bit of more modern Chipset/CPU/GPU. But then, all will be perfect and people will no longer be buying other smartphone brands :P

AnonD-441601, 18 Feb 2016WoW. With its specs and durability it would cost more than ... morescreen resolution is an issue for me. the other stats look great

This is what I call REAL innovation!
Some may say, it is a bulky device. Yes it is, but it can do some things which others CAN NOT do. Do not forget this is waterproof and shock resistant as well.
Anyway this phone is not meant to be a super attractive one, but a durable one. :)

WoW. With its specs and durability it would cost more than upcomming Iphone 7 :-)
Wonder if anyone needs phone like this for its massive price.

finally, i see a different smartphone in the nowadays phones, at the many cases :)