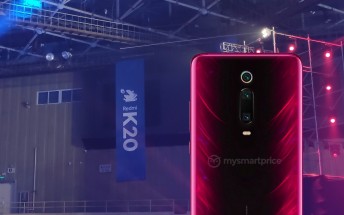 The Redmi K20 will be unveiled tomorrow and the brand is ramping up its teaser campaign. It started by posting an image of the red color and now CEO Lu Weibing has also shared the first teaser video for the phone (also of the red one, you can see the blue paint job here).

This is just a teaser, we expect the full promo video to be a good deal longer. Still, this one does a great job of highlighting the special coating on the back, which creates reflections that seem to move as the light hits the phone at different angles.

Note that this is the Redmi K20, not the K20 Pro (we expect both will be unveiled simultaneously). The non-Pro will be powered by a Snapdragon 730 chipset (down from S855) and will have a headphone jack. Its expected to have a 48MP main camera (plus tele and ultra-wide cams), as well as a 4,000mAh battery.

Join us tomorrow for the reveal of Redmis first flagship  the K20 Pro  and its non-Pro sibling.