Last year on the Xperia 1 Sony introduced the Cinema Pro app - a fairly advanced if a somewhat flawed app for capturing video. It complements the full-auto video recording capabilities of the main camera app on the smartphone and offers more nuanced control over the shooting process. We tested it back then and you can read our findings and watch a sample video shot on the Xperia 1 here.

The Xperia 1 II we got to review recently comes with an updated version of the Cinema Pro app and we were interested to see if Sony had addressed the issues we encountered last time around so we put in the hands of a professional cameraman and followed him out on a mission to shoot a real-world cinematic video (granted, in a short amount of time and without much planning).

We generally kept to the same routine as before. That means shooting handheld most of the time, with only the occasional shot stabilized with a gimbal. We used the Venice CS and the Opaque/BU60YE60 color profiles and then graded the footage to taste. A DIY ND filter solution was employed in bright daylight, more on that in just a bit.

Here's the clip, read further down for our cameraman's impressions from using the app on the Xperia 1 II.

Being able to tweak shooting parameters is nice and all, but a cinematic video is shot at fixed shutter speeds because of the way they affect how motion is captured and perceived by the audience. So when you have fixed shutter speed and a fixed aperture on a camera, the main way to control the amount of light is by using neutral density (ND) filters. ND filters are an essential tool for any videographer and even today, a year after the Cinema Pro app was introduced, the Xperia 1 II still doesn't have a dedicated case or another solution for attaching those to the phone.

The makeshift way we did it was by clipping rectangular ND filters to the back of the phone, with literal laundry clips. Wire ties came into play on occasion too, and sometimes we simply held the filter on top of the camera. That is actually a step back from what we had last year - you see, back then with the cameras mounted along the central axis of the phone, you could cut out a circle in a phone case and glue a step-up ring to use its thread for attaching regular circular ND filters. Hardly pretty, but functional nonetheless. Not so on the Xperia 1 II with its off-axis camera position. We're thinking Sony could have come up with an in-house solution by now, given how they're marketing the phone and its Cinema Pro app.

We're not saying ND filters are a must - you could alternatively increase the shutter speed to get the exposure right, but that's counterproductive for achieving the 'Cinema Pro' look of the footage that the app's name promises. 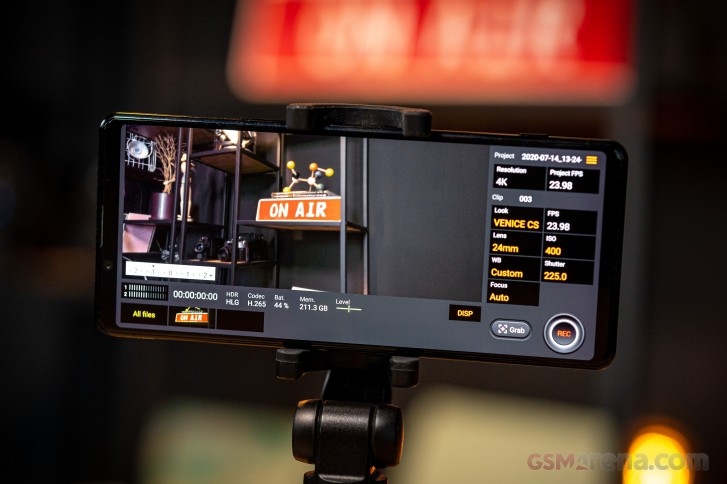 Next up, the Xperia 1 II's three cameras have different apertures - f/2.2 on the 16mm, f/1.7 on the 24mm, and f/2.4 on the 70mm. Couple that with the different minimal ISO sensitivities (50, 64, and 25 respectively) and matching exposures between the three cams becomes an inconvenience.

Speaking of exposures, Sony's made a marginal improvement in providing you with a tool to judge proper exposure - a -2 to +2EV indicator scale in the bottom left of the viewfinder. Still, in an app with such pro aspirations, we'd expect to see zebras, or false color, or a histogram, or all of these. That's not the case though. As aids go, there is no focus peaking either, no improvement here.

We greatly appreciated the ability to rack focus between pre-set focus distances (A-B) with control over the duration of the rack. That feature got introduced with the release of the Xperia 5 and was later brought to the Xperia 1, so it's not new on the Xperia 1 II but still...

What is new is the addition of tap to focus functionality, though we found it to work unreliably - sometimes it simply wouldn't focus where we tapped. There's no tracking either, so if your subject moves within the frame, the phone won't follow it.

On top of that, if you tap to focus on something you get a box in the viewfinder and if you then pan the phone it will refocus on whatever subject happens to fall inside the box, instead of staying focused on the initial subject - focus and recompose simply didn't work.

The Eye AF is not available in Cinema Pro either - you have it for stills in both Photo Pro and in the main camera app's photo mode, but it's not available for video recording in either app.

A significant upgrade that we appreciate is the ability to set white balance by pointing the phone at a gray card. Additionally, you get sliders for tweaking the WB along the Blue-Amber and Green Magenta axis. Neither of these is available on previous versions of the app that we have on the Xperia 5 and the original Xperia 1 - you only get WB presets on those.

Other small tweaks take things in the right direction. For example, you can now switch the color profile between clips while working on the same project. Previously, each project had the color profile set and that was that. Also, in addition to the 23.98fps and 29.97fps frame rates previously available, the Xperia 1 II now lets you record in 25fps, 59.94fps, and in 120fps (2K only). However, you can't change resolution and frame rate without starting a new project.

Ultimately, much like the last time we delved this deep into Sony's Cinema Pro app, we can't help but feel like it's a missed opportunity. A lot of the features that aren't there seem like no brainers, yet Sony hasn't included them - most notably the exposure aids. Another aspect of the UI then just don't work as expected - the framerate/resolution handling, also the tap to confirm required in most menus.

Then there's the ND filter situation. With this much attention given to the Pro apps, an in-house solution for attaching filters sounds like a must, the way we see it. An optional one that you can purchase at an additional cost, of course, not necessarily one bundled with the phone, though that would be even nicer. If it were an iPhone, you'd be able to get working third-party options, simply because of the iPhone's popularity - with the Xperia's more niche target group, it's hard to expect accessory makers to find the motivation to offer a solution. 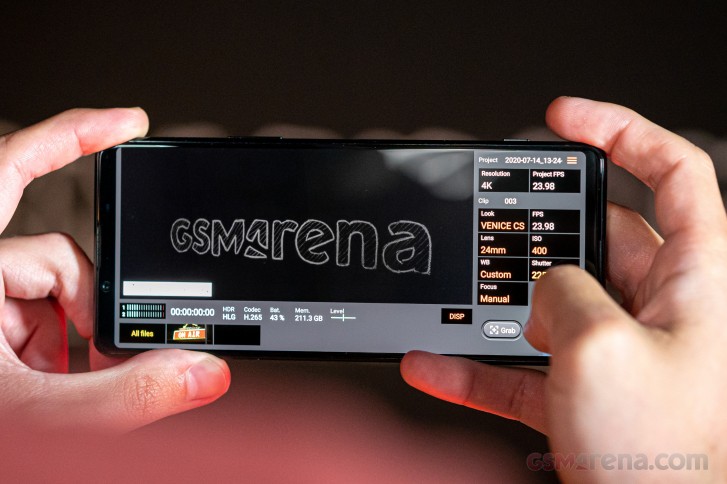 Ultimately, the Cinema Pro app in the state we tested it on the Xperia 1 II does a few things right but is again far from perfect. We appreciate the minor improvements, but if Sony was really after making the ultimate smartphone video recording tool, perhaps they would have gotten there already. Right now, the CinemaPro app creates the impression of being hardly more than a pet project.

your comment is so eaeaaughh and whoa! that i am astounded and in total awe at your absolute mastery over all the knowledge of this world. i am so dazzled and stunned that i am unable to point out the obvious. your sheer brilliance is infectious and ...

Taser? Do you know the difference between a taser and a charger's output? They don't work the same. You won't put your hand in an active power socket while you can safely touch both ends of a 12V battery. Super vooc @50W is only 10V it...