When a new flagship phone is announced, it’s not uncommon to hear “console-quality graphics”. And the contemporary consoles always have better graphics, why is that? A cynic might say “the SNES is a console too” but there’s more to it.

The Apple chipset includes a quad-core processor into the transistor budget. To be fair, we need to be comparing what AMD calls “APU” - a combined chip with both CPU and GPU on board (similar to a mobile chipset).

Pretty close, right? The Snapdragon 835 is noticeably smaller at 3 billion transistors while the Kirin 970 is the biggest yet (on mobile) with 5.5 billion.

What about the A11? Apple is quiet about such numbers but the A10 GPU does an estimated 250 GFLOPS and the Apple-designed GPU for the A11 Bionic is said to be 30% faster – so 325 GFLOPS, comparable to the Kirin.

These numbers are guesstimates, perhaps not terribly accurate as the benchmarks we ran for the iPhone 8 review showed the Apple chip wiping the floor with the Snapdragon.

Still, the difference in graphics quality is evident despite similar transistor counts and comparable clock speeds. One might argue that AAA titles are rare on mobile compared to consoles and PCs. But we think it’s mostly physics to blame.

Heat, specifically. The Xbox One had fairly loud fans and even though the One S is much quieter, it still has active cooling. Phones are exclusively passively cooled. Some have heat pipes, but that just moves the heat around, it doesn’t blow cool air at the chipset. 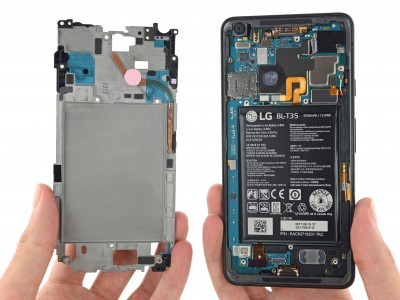 The heat pipe in the Pixel 2 XL keeps the Snapdragon 835 cool (photo: iFixit)

Mobile TDPs are tricky, none of the makers publicly states how many watts of power their chips draw. The number is around 2-3W to keep the phone from becoming uncomfortably hot. Not to mention killing the battery in record time.

AMD’s new mobile Ryzen chips offer performance similar to the Xbox One at 9-25W TDP (configurable). Of course, the Xbox APU was built on a 28nm process, the new Ryzen is on 14nm and mobile chipsets have gotten down to 10nm.

That’s a trick that will not work for much longer – keeping the TDP constant while lowering the nanometers to increase performance and reduce power usage. Moore’s law is half dead as it is and soon the nanometer number will stop decreasing as rapidly.

Battery packs are already pretty common, but which manufacturer will be crazy enough to actively cool a phone? We would have thought Razer might do something like that, but the team proved surprisingly level-headed.

We should point out that a Surface Pro 4 measures only 8.45mm thick and it has active cooling with a low-profile fan. We’re not saying its possible to pull this off in a phone, but we’d love to see someone try.

* Note that the Xbox GPU is rated for 32-bit FLOPS while mobile GPUs typically work in 16-bits. However, that will affect the graphics quality not the frame rate.

Counterclockwise: two is better than one

First, I didn't tolerate political topics on GSMArena. Second, these comment will be removed immidiately due to violation of GSMArena TOS, here it says at "post your comment": "No politics or religious discussions. Please stick to...

Which manufacturer would be crazy enough to actively cool a smartphone..... ZTE Nubia entered the chat

You are spreading lies. You should stop doing it. You couldn't disprove anything in my comment.