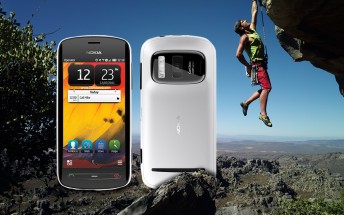 We've traced the rise of the cameraphone before, but since we're in a lull in the megapixel race, we wanted to look back and check the milestones reached along the way to the Nokia 808 PureView - the 41MP monster that (five years later) is still the phone with the highest resolution camera (and only matched by Lumia 1020 since).

Then in early 2005 Samsung unveiled the P850, a flip phone with a rotating screen and a 3.15MP camera. Sound familiar? You may be thinking of the Nokia N90 from a few months later and its 2MP camera (with Carl Zeiss optics). Before the year's end, the Nokia N80 matched Samsung at 3.15MP.

The venerable Nokia N95 reached 5MP in early 2007. Sony Ericsson, an early player in the cameraphone market, put out the K850 and LG outed the KU990 Viewty (you may remember this one from previous installments, it's the first phone with slow-mo video).

Back in the day, we did a Grand 5MP shootout with these three plus the Nokia N82 and Samsung G600, which also came out in 2007.

2008 was the year of the 8MP phone with a mix of sliders and bars. Samsung had the i8510 INNOV8 joined by the Pixon. LG answered with the KC910 Renoir as did Sony Ericsson with the C905.

We have an 8MP shootout too, if you want to see what these were capable of.

In 2009, when 12MP was the bleeding edge, cameraphones still avoided Android. The Sony Ericsson Satio ran Symbian, the Samsung Pixon12 was a feature phone. Samsung's W880 was interesting because it had 3x optical zoom, something that never caught on (though some dual cameras of today do offer zooming functionality).

There was a brief flirtation with 13MP by Motorola and Toshiba, but Nokia put an end to the debate in 2012 with, yes, the Nokia 808 PureView - one of the best cameraphones of all time.

Its monstrous sensor was 1/1.2", the biggest we've seen on a mobile device. To put that in perspective, the sensor was 3 times the size of a 1/2.3" sensor like the ones we see in the Xperia XZ Premium, Google Pixel and a few others.

The sheer size of the sensor meant that despite its massive 41MP resolution, pixels were still quite large at 1.4µm (the Nokia N8 was at 1.75µm pixels). But the genius of the phone was elsewhere - mature image processing and leveraging on that resolution to enable high-quality digital zoom for 8MP photos. Advanced image processing is at the heart of the best cameras today.

Nokia kept things going for a bit longer, in 2013 it came out with the Lumia 1020 (running Windows Phone). It kept the 41MP resolution, though it shrunk the sensor to a still huge 1/1.5" (pixel size went down to 1.12µm). However, megapixel counts dropped off quickly after that.

Thin phones and an aversion to camera humps killed the large sensor phone, which limits the practical resolution to 20MP or so. Most makers actually took a step back from 16MP to 12MP to improve low light performance and since pixels are still fairly small, HDR+ or dual cameras are used to improve image quality.

Some makers tried to push Super Resolution, which combines multiple shots and upsamples them, but it's not the same. Zooming into a full resolution Nokia 808 photo was an experience all of its own and one (we're afraid) will not be repeated soon.

It's worth mentioning the Panasonic DMC-CM1 here. 20MP with a 1.0" sensor, absolute beast of a camera. It was more a camera that happened to have a phone strapped to the back of it. Still use as a point and shoot to this day. I don't think there ever...

Amazed at how many fanboys are still praising the crap 808 , thew mine in the trash long ago

LOL no one cares.