The Moto Z3 Play is due for announcement soon and we've already got a well-rounded idea of what to expect from it.

That's in large part to an appearance at the FCC which gave us an idea of the specs, and some case renders that gave us an image to go along with those specs.

Today we get an even better-looking image from Poetic Cases, which already offer their Karbon Shield case for the Moto Z3 Play. The images of the case reveal the phone's front, occupied solely by the 18:9 display, and the back, housing the dual-camera module. 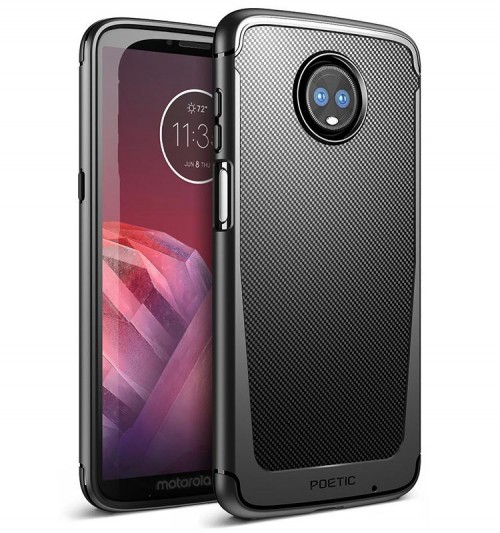 What's interesting is the large cutout around what looks like the power button, mounted on the right, underneath the volume buttons - just like on the Moto Z2 Play. On the Z3 Play the button looks larger than is usual - could it have the fingerprint scanner embedded inside?

There's also a third button on the opposite side, but we can only guess at its purpose.

The Moto Z2 Play had its fingerprint scanner on the front, under the display. The Moto Z3 Play could have had its scanner on the back, but the case renders show no cutout. We'll find out soon enough.

The Moto Z3 Play has been rumored to have a 6-inch screen, Snapdragon 636 chipset and come in 4GB+32GB and 6GB+128GB configurations. Battery-wise we're expecting a 3,000mAh power pack. Finally, the dual camera could be a 12MP+8MP unit with a 5MP selfie snapper on the front.

For the full set of images, check out Poetic Cases.

Oh yeah I get it ;) I know right? Manufacturers should really use the SD 660 for midrangers yet to be released this year. It's equally efficient plus provides more raw power

The first time that there is no phone jack in the z play series!! Hope that is not the final design!!

sorry about my poor English I mey have written it wrong :P what I meant is that it can deliver a decent level of profurmence and consumes a vary low amount of energy why do you think most manufacturs use the SD625?