Still, the Nubia Z18S, which popped up in a recent video could take the experimental spirit to a whole new level. Its headlining feature, being a secondary display on the back, quite reminiscent of the YotaPhone design, which kind of slipped into obscurity.

Only Nubia will, apparently, be using a full-color OLED panel, instead of an E-Ink solution. We know this with a fair bit of confidence thanks to a recent TENAA listing for one Nubia NX616J. The page does not feature TENAA's usual set of photos, at least as of writing this article. However, the Chinese certification authority does have two distinct display entries on record - a 6.26-inch LCD, with a resolution of 1080 x 2280 pixels and another 5.1-inch, 720 x 1520 pixel OLED. That's a pretty usable display, size-wise, in our book.

TENAA provides some measurements as well: 154.1 x 73.3 x 8.65mm and a weight of 178 grams. This definitely makes the Z18S a chunky device, but nothing too unexpected, considering the extra hardware, as well as the fairly large 3,800 mAh battery.

Other quoted specs include a 2.649GHz octa-core processor, which is probably the Snapdragon 845. Keeping it company - 6GB or 8GB of RAM and 64GB or 128GB of internal storage. As it would appear, non-expandable. The handset should boot Android 8.1 Oreo out of the box. 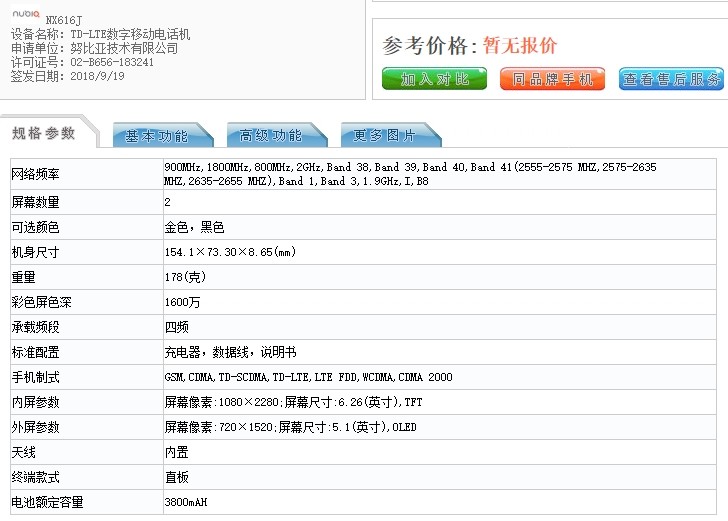 There are, however, some discrepancies between the leaked hands-on video and the listed TENAA specs for the Z18S. The former clearly shows a dual camera setup on the back, while the certification authority claims there will be a single 24MP camera on the back and a 16MP selfie snapper.

We'll definitely keep and eye on the Z18S and its visits to the rumor mill and keep you posted.

ZTE nubia wants to slap a smartphone on your wrist

can just put transparent TPU case for the phone

Don't ever buy a ZTE phone. They still have not updated the Axon 7 despite promising to do so over a year ago and they turned off all customer support.