Xiaomi posted the first promo videos for t he Mi Note 10 – one focuses on the camera and one on the design. We think it’s pretty telling that the camera video is twice as long as the design video, this phone trades on its unmatched camera skills.

This may not be the first penta-camera design in the world, but unlike the Nokia 9, we have four different focal lengths – this is the first phone to offer two tele cameras (5x and 2x), plus it has a regular, ultrawide and macro cameras.

That’s not the title of the video, however, as Xiaomi claims another first – the Mi Note 10 will be the first phone in the world to launch with a 108MP sensor. Check out the video for a quick introduction of the five cameras.

By the way, there’s a Xiaomi Mi Note 10 Pro on the way too, that one has a different lens design for the 108MP module, plus more RAM and storage. Then there’s the Mi CC9 Pro, the Chinese model, which is essentially identical to the Mi Note 10 and Pro (depending on which memory configuration you choose).

What all models have in common is a curved screen on the front (a 6.47” Super AMOLED panel with 1080p+ resolution) and a matching curve on the back. While it’s not explicitly called out in the video, Xiaomi found enough room for a 3.5mm headphone jack, despite having to mount five cameras, four LEDs for the flash and a 5,260mAh battery. This makes it hard to believe the “not enough space” excuses by other makers.

If you want the two videos synthesized into one single image, then this is it: 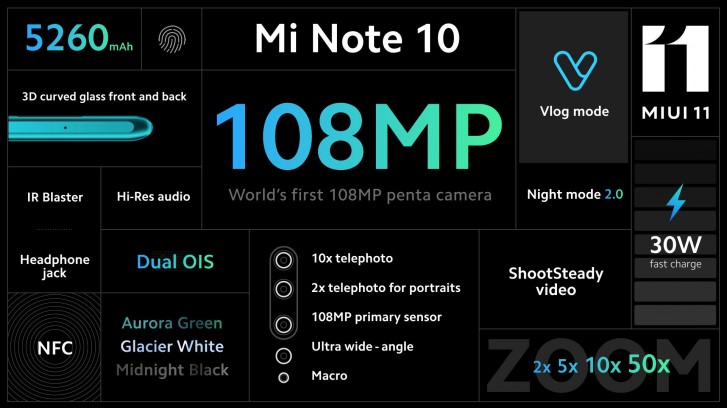 For a more detailed look, you can check out our Xiaomi Mi Note 10 review and don’t miss our unboxing and key features video.

So I cant do a presentation slide that looks like an interface because im immediately copying it? Where is the logic there? iOS is using big bold titles now, so anyone doing that during a presentation is a copycat? Are you serious?

Marketing costs will be reflected in the pruce of the devices.