Google has just started sending out the December security update for the Nexus and Pixel devices that it supports directly, but Samsung wants to quickly get in on that action too. Perhaps surprisingly, the Korean company's first handset to receive the latest patches isn't the S8 or the Note8. Instead, for the third time in a row, Samsung has chosen the mid-range (and quite old by mobile world standards) Galaxy A5 (2016) for that role.

The December update is already out for this device in the Netherlands - if you bought yours unlocked and unbranded. It should make its way to additional countries within the next few days. Hopefully that's also the timeline for this release arriving on the company's flagships. 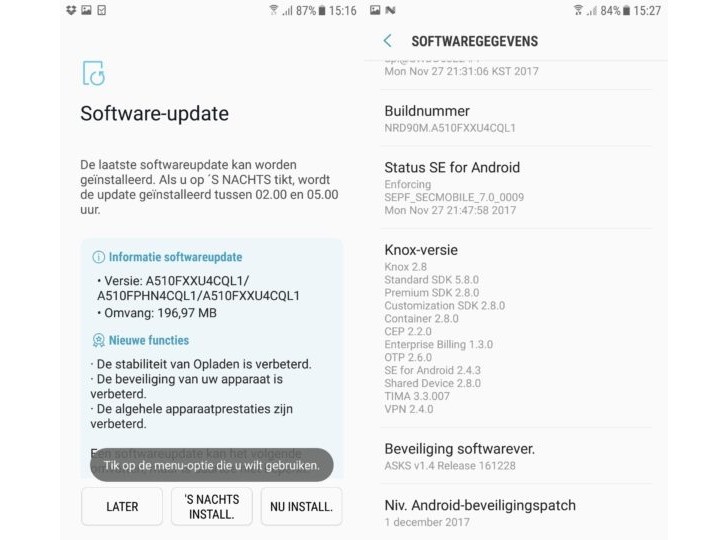 If you have an A5 (2016) and got the update notification, expect a 196MB download. After installing the new software, you'll be on build A510FXXU4CQL1 and the December 1 security patch level. Samsung says you're going to see improved charging stability too, as well as better overall performance.

There's apparently been an issue with Wi-Fi connections on this model ever since the October security update. If you're affected your phone often won't want to connect to a Wi-Fi network due to a verification error. Unfortunately it's still unclear if this bug has finally been addressed with the December update.

On my Sony - this a place for 3G, 4G etc bages. If you did not conect to mobile internet, it will be looks like "х" or "+" on top of your antenna indicator

On top of the screen there is an icon" (+ "like this. What does it mean? And how to remove it? Pls let me know.