Today we’re covering two of the latest Galaxy Note8 leaks. First off, a Facebook post allegedly contained a live image of the Galaxy Note8’s camera setup, along with what is believed to be a press image of the Note8. It does seem like we’re looking at the real deal here, what with the few other leaks with the same camera setup layout: dual camera, LED flash and heart-rate sensor, and the fingerprint scanner; in that order. 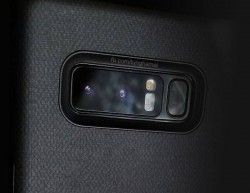 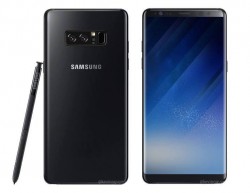 Samsung must not have been able to get the on-display fingerprint scanner implemented in time for the Note8. We’ve yet to know if Apple is going to have this technology in time for the new iPhone. Otherwise, vivo is the first to officially show it off.

Secondly, yesterday’s alleged case leak coincides with the supposed layout of the dual cameras, the first dual-sensor setup to appear on any Samsung smartphone. In addition to the camera setup, the bottom part of the phone case reveals the port layout, which does include a spot for a 3.5mm headphone jack, something that Samsung isn’t removing from smartphones.

While we’re quite sure Samsung wouldn’t remove the headphone jack between the Galaxy S8 and Note8 model releases, there’s a possibility that the camera setup still isn’t finalized. As always, take these leaks with a healthy amount of skepticism.

It's not even out yet.

Around 8mm thick still can built-in the fingerprint that's great tech, you can't find others with this kind of techniques.