Gionee is the latest company joining the trend of edge-to-edge screens. The phone that previously appeared on GFXBench might be the Gionee M7 that was teased at the company’s official Weibo account. 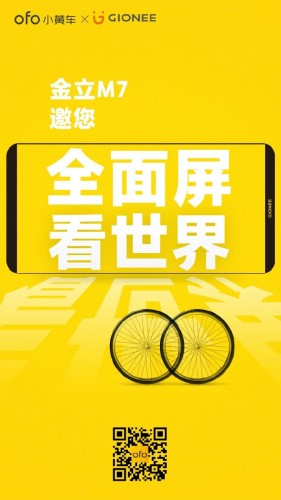 Gionee is collaborating with Ofo, a bike-sharing start-up from Beijing, in launching the M7. The image reveals two bike wheels and their arrangement hints at a dual-camera setup for the Gionee M7.

If the device is the same as the benchmarked one, it might have a 6” screen and MediaTek MT6757CD chipset. The RAM will be 4 GB and storage 64 gigs. We just have to wait for Gionee to announce an official launch date for the phone, so we know for sure.

Gionee A1 Lite goes on sale in India tomorrow

Gionee A1's latest update is all about selfies

Immediately please we are waiting, but it must reach Nigeria first