Google seems to think email would be great again if only it didn't involve any of that pesky typing on your part. To fix the glaring issue of people having to actually type their messages, it's unveiled a new feature for Gmail called Smart Compose.

It uses AI to help you write emails faster. "Write" is a bit of a misnomer here, because in effect it will suggest complete sentences, and you can compose an entire email just by continuously hitting the Tab key. That has the potential to result in some hilarious messages if things go wrong. 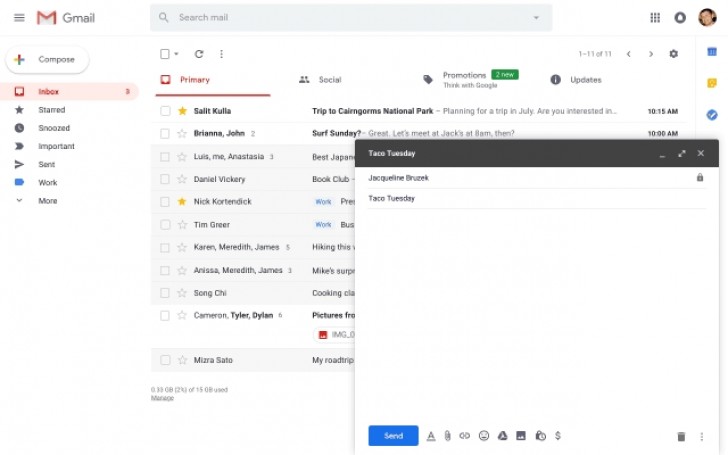 It works in the background, so you just start typing an email as you normally would. Then suggestions start popping up, and when you see one you like, just hit Tab on your keyboard. The next suggestion will then come up, and you can keep doing the Tab dance if you want, all the way to the end. Since it's context-aware, if it's Friday you'll get "Have a great weekend!" as a suggested closing phrase.

Even greetings at the beginning are predicted, based on the recipient and subject. Smart Compose will obviously save you a lot of time, by cutting back on repetitive writing, and it also reduces the chance of spelling or grammar errors.

The feature will appear in the new Gmail for consumers sometime over the next few weeks, while G Suite customers will receive it in the coming months. To get Smart Compose, once you've switched to the new Gmail, head to Settings and enable "experimental access". If you've had enough of it at any point, you can just go back and uncheck the box.

Certainly not this "feature". This will allow people with low IQs to write proper emails and trick the readers into thinking they're reading valid information written by an educated person. While the email composer just had to hit that TAB key a few ...