No one doubted that Google will take proper care of its own mobile OS, giving it all the care and attention it needs to grow up nice and strong. Their developers have just come up with a handful of new features for Android, called Google Goggles and What's Nearby.

Google Goggles let's you use your Andoid 1.6+ handset's camera to initiate Google search with an image, rather than words. As of now Goggles is able to recognize landmarks, works of art, and products but they are doing their best to extend the support to other areas.

The other new addition for Andoid 1.6+ devices is the "What's Nearby" feature for Google Maps. Available as an update from Android Market, the new functionality allows you to hold your finger over a place on the map and get a list of the 10 closest points of interest, including restaurants, shops and others. 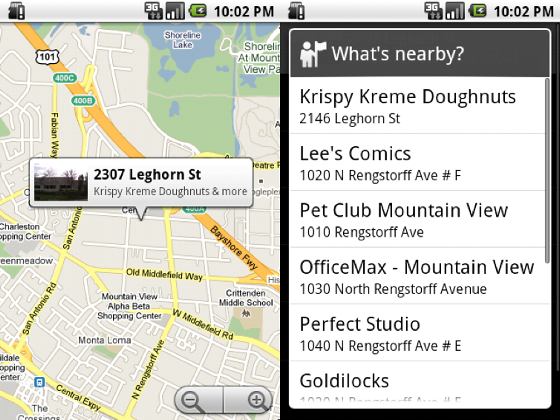 In a few weeks the mobile version of google.com should be able to provide the same search experience to iPhone users as well - they should just click "Near me now".

Finally Google have also managed to bring an update to the voice search feature on the Android handsets. It now supports Japanese language joining the already available English and Mandarin.

Like google and/or evil entities your photos for their own malicious plan?

nokia done this long time... its called point and find.

They say available for 1.6 - so I would hope these can be found now within Market? Failing this, 2.1 (éclair) should be available very soon now (for the Hero)!! *Does anyone have any further updates on this (the official version)?