The Pixel 2 ships in pretty much the same-sized box as the XL - it just doesn't say 'XL' on it. An image of the phone is printed on top in the actual color that's inside, and the back of the box is entirely blue and flaunts a #teampixel hashtag.

Inside the box, you'll find a Power Delivery 2.0 charger capable of pushing up to 18W of power over USB-C, a USB-C cable, a USB-C to 3.5mm dongle and what Google calls the Quick Switch adapter - a USB-C to Type-A adapter. No headphones, as usual.

The Pixel 2 measures 145.7 x 69.7 x 7.8mm, and that puts it in iPhone X/Galaxy S8 territory. Which is the territory it aims to conquer, so all is well. The S8 is 3 odd millimeters taller and 1.6mm narrower for which it offers quite a lot more screen area. The X is a mil shorter and a mil wider - also with a lot more screen estate, even if it's all notched up.

The Pixel 2 is, however, the lightest of this bunch - at 143g, it's a whole 29g lighter than the iPhone X, not exactly negligible. The 12g that separate it from the Galaxy S8, on the other hand, you may not feel as easily.

Light as it may be, the small Pixel 2 is a Pixel through and through. The signature glass panel on the back makes it abundantly clear that's no other phone. Or rather, makes you wonder which exactly size Pixel 2 it is, until you realize that this small one has the camera and flash positions swapped and the camera is on the inside. 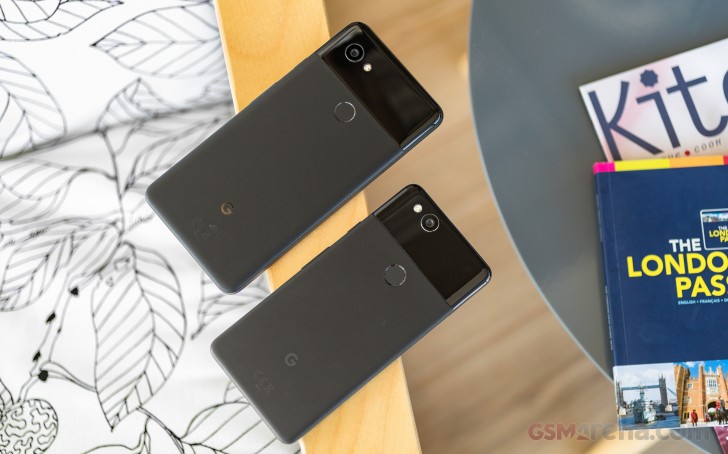 We do have the more incognito black versions of both phones, and that doesn't help with identifying which is which, but the other color options do make it easier - the Kinda Blue and Clearly White paint jobs are exclusive to the small Pixel 2.

With different paint jobs come different finishes of the aluminum back panel. The Just Black is grainier that the other two and should be grippier, though that's pretty hard to quantify.

Flip over to the front and it doesn't take colors to pinpoint the Pixel 2 Medium - there are bezels to do that for you. The actual display is 25mm shorter than on the XL, while the phone is just 12mm shorter - the rest of the difference is distributed between the chin and forehead. 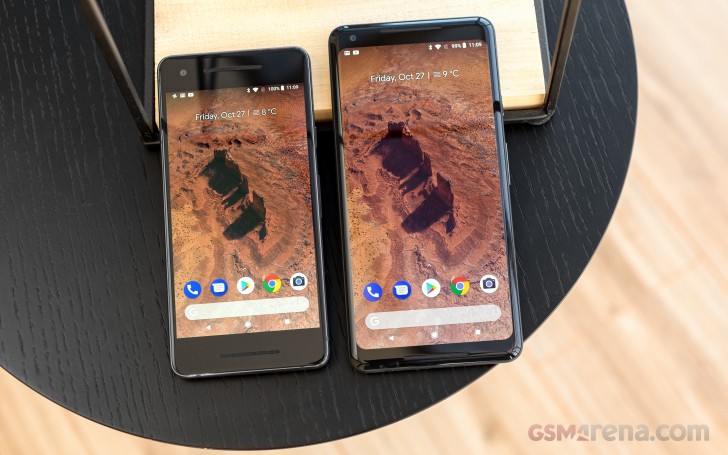 Obviously, there are speakers in there, and that can never be a bad thing, but the XL packs those speakers as well, yet has a lot less meat around the display. That being said, the small Pixel needs to house most of the same innards as the big one, and inevitably has the footprint to reflect that.

There are other immediately noticeable differences too. For one, the display has some of those things, what were they called, sharp corners. Displays without rounded corners are headed for extinction, at least on top end devices. Even if we're not there yet, it's going to happen sooner rather than later. 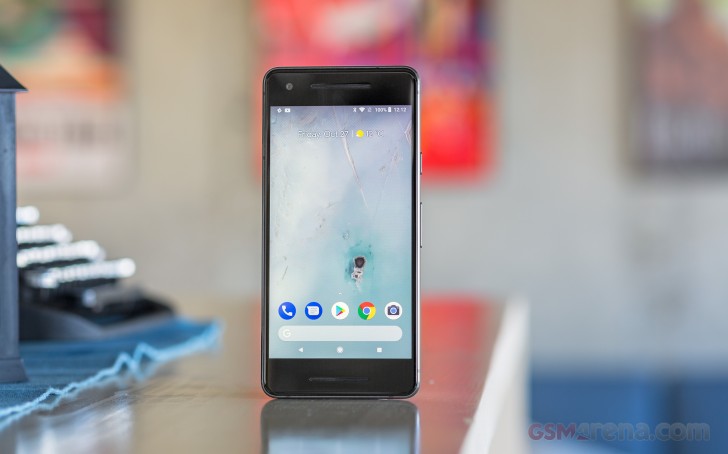 And while neither Pixel 2 has a curved display, the front glass on the XL is indeed very much rounded towards the edges. Not so with the Pixel 2 proper, where the glass is mostly flat. This is mentioned in the specs of the phones too - the XL's glass is labeled as 3D, while the small one is half a D short. Marketing.

There's an equal number of front-facing cameras on the Pixel 2 as on the XL - one, to the left of the top speaker, which doubles as an earpiece for those who still do voice calls. Right above the speaker slit, and just barely visible under direct light is the proximity/ambient light sensor assembly. There's a notification LED too - to the right of the speaker; you just need to enable it in settings.

The USB-C port is centered on the bottom and is the only option for charging and wired audio output. There is no wireless charging on the Pixel 2, which isn't a huge deal, but we're still grieving over the disappearance of the 3.5mm jack. Oddly, the small Pixel 2 has its mic on the bottom - the XL's is behind the speaker grille. There's another mic pinhole on top, just like on the Pixel 2 XL.

We're not huge fans of the button arrangement on the right side of the phone. All too often we ended up hitting the volume rocker when looking for the power button, on both sizes of Pixel 2s. If they are on the same side, which isn't ideal to begin with, at least have the power button lower, we reckon.

The card slot is on the left - it can be anywhere, for all we care. What we do care about is storage expansion, and the Pixel 2 doesn't give you that option - the card slot will only take a single nano SIM and no microSD.

Right side • Ideally, those would be flipped • Lone card slot on the left

One difference we did observe while handling the Pixel 2s is that the small one is more easily squeezable. That is, the Active edge feature is easier to evoke on this one than it is on the XL for people of varying palm sizes. It's something.

The only thing I found awkward were the bezels. Everything else was great... IP68 is sometimes a good amount better, but I think IP67 is good enough. I overprotect my phone so much sometimes I forget it is water resistant. I feel like only a weak spr...

This phone makes me want to swear. The lack of a headphone jack isn’t too bad but the built-in quality is so poor that I’d rather listen to dial up on earrape for 24 hours. The camera is not even mediocre, and yet it’s the best part on this 2001 qual...