Google Pixels were never really beauty pageant winners. The first-gen models almost had more bezel than screen, and while last year's XL was more in keeping with the trends, the small Pixel 2 looked dated. Well, this year the small one is no ugly duckling, while the big one... well, that notch is the subject of another discussion. 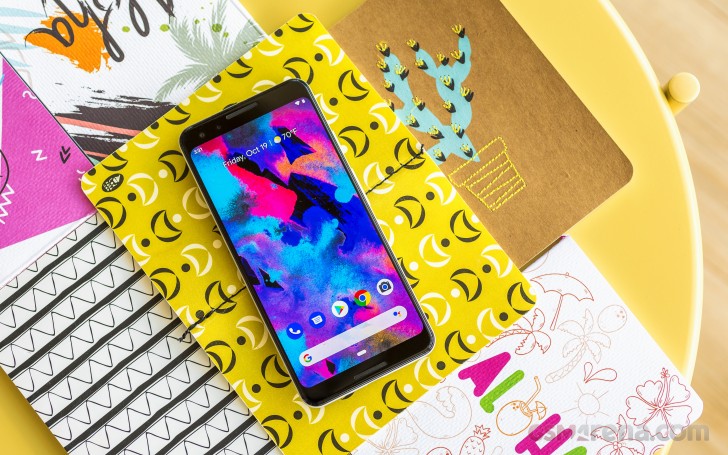 One of the main changes is the display - in both size and proportions. While last year's model with its classic 16:9 aspect stood pretty much alone in a world of 18+:9 handsets, the Pixel 3's display is a tall one. And stretching it up and down has increased the diagonal to 5.5 inches, compared to the Pixel 2's 5 inches. All this has resulted in a much more balanced front - for a change, not dominated by the chin and forehead. In fact, the Pixel 3 is the first small Pixel with a reasonable screen to body ratio. 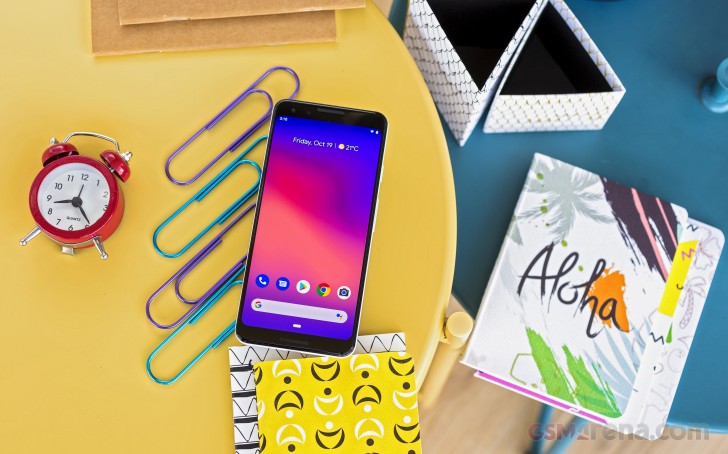 That said, it's not remotely what you'd call 'bezelless' - the Galaxy S9, for example, still makes better use of what is essentially the same footprint. What's a bit irksome, more so than the large-ish top and bottom bezels is the fact that the top one is actually a millimeter thicker - as in, it's subjectively top-heavy. 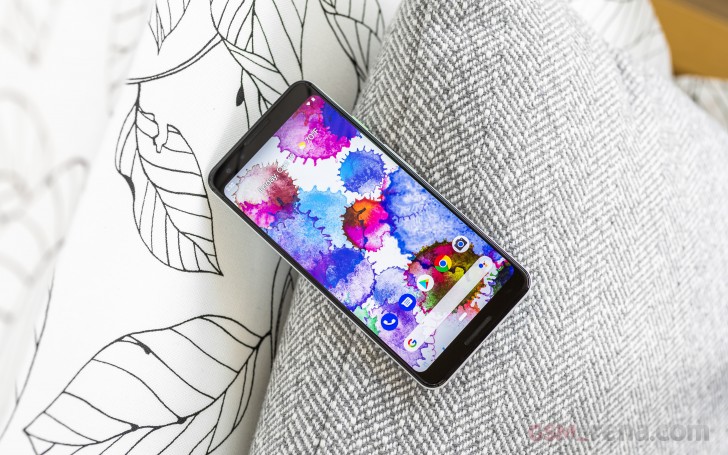 The top does have to be large enough to accommodate the pair of cameras, so at least the size is warranted. And it's infinitely better this way than cutting out a notch the size of the 3 XL's in a phone as small as the 3. The list of top bezel stuff continues with the earpiece that also doubles as a second speaker and next to it are the ambient light and proximity sensors. Don't go looking for a status LED - you won't find one. Below the display is the grille for the other speaker. 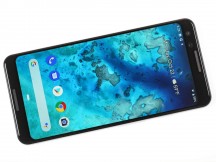 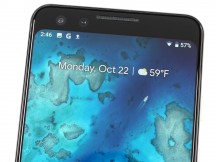 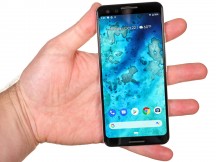 5.5-inch display in the footprint of the 5-inch Pixel 2 • Top bezel stuff • In the hand

It's on the back that you'll see the biggest change in design, though it's not immediately apparent. The two-tone look is here to stay, but the coated aluminum has made way for a glass panel. The top part with the camera and flash (and spectral/flicker sensor in between?) is your regular glossy glass, while the rest of the back has a frosted finish. It feels magically silky smooth in your hand and you just want to keep caressing it. 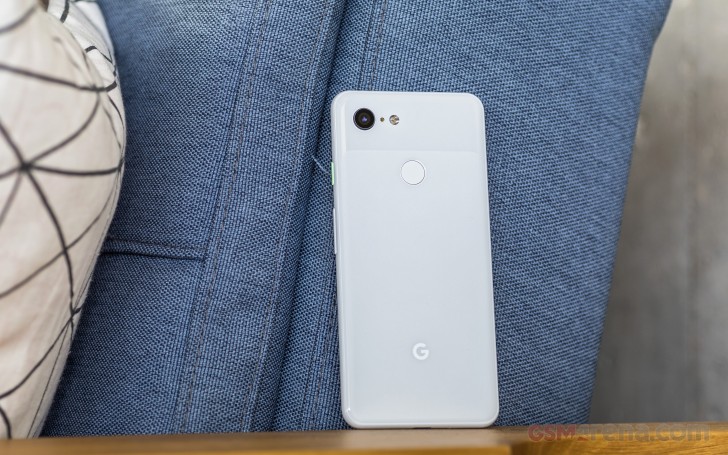 Only, it's so slippery, that you'd want to put a case on it and leave it on. Which is what we did, so we can't really confirm the back scratches easily, but the entire internet can't be wrong. So another reason to keep your Pixel 3 in a case and only take it out in controlled environments for a few quick fondles. We're not saying we picked the absolute best color of fabric case to go with our Clearly White Pixel 3, though. 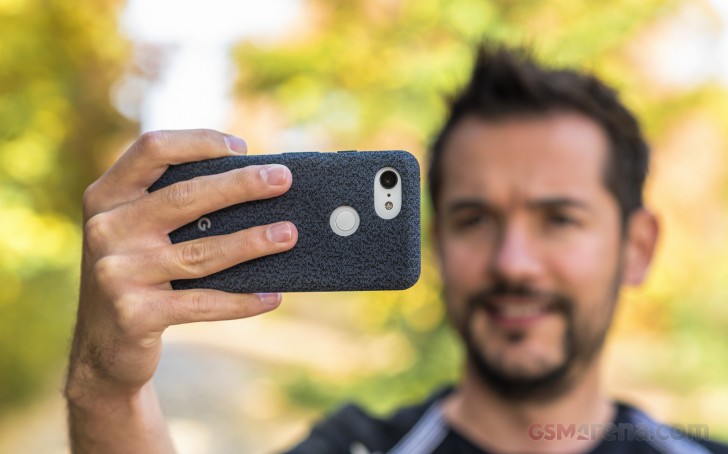 The glass is kept in place by an aluminum frame, the outside of it polished to a shine. The buttons are on the right, in an arrangement we keep complaining about, but it's not us who decide. The power button is high up, while the volume rocker is below it and it's a recipe for misclicks. Those are some nice positive hard clicks, though, unlike the Pixel 2's flimsy buttons. As usual, Google adds a color accent on the non-black phones and the power button of the Clearly White versions is mint. 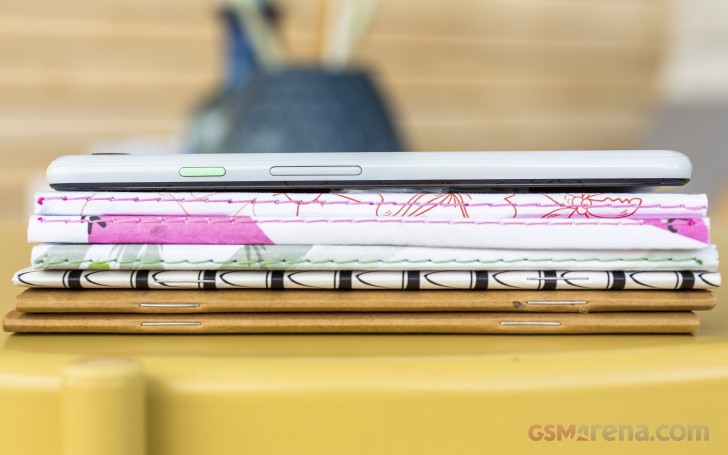 The frame itself is pressure sensitive, and it can react to a squeeze by launching the Google Assistant as well as silencing incoming alerts and alarms. The feature's called Active Edge, its sensitivity is customizeable, and best of all, it can be switched off entirely.

On the bottom, you'll find the USB-C port in the center, and it's the only port around - there's no 3.5mm jack on board. The SIM card slot is down here as well - single nano SIM, no microSD, that's how Google does it. 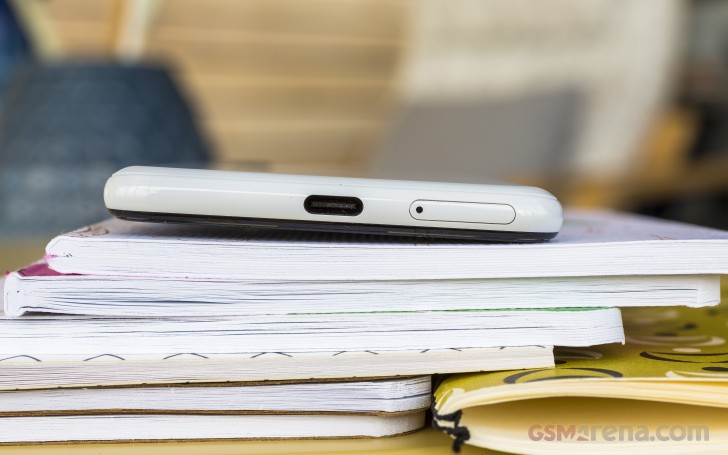 On the top there's nothing to be found but a secondary mic, which is still more than what you can see on the left side - the frame goes uninterrupted. 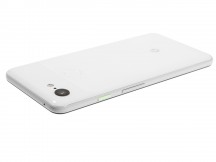 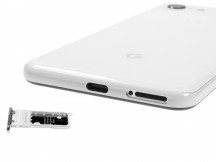 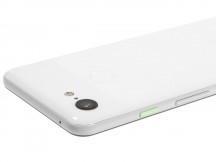 The Pixel 3 is one of the most compact top-tier Android handsets you can find on the market today with its 145.6x68.2x7.9mm and 148g. The Xperia XZ2 Compact may be a centimeter shorter but with a thickness of 12mm and a weight of 168g it's pretty chubby, plus it's got a tinier 5-inch display. The Galaxy S9 is marginally larger than the Pixel 3 in all three dimensions, and is also 15g heavier, but it's got some extra screen to show for it.

The Pixel's screen isn't half bad, despite its 0.3" inch size disadvantage compared to the S9. Check out the test results on the next page.

I am not sure whether the 49 megapixel mode performance is better than the 48 megapixel AI Ultra Clarity mode of the Huawei Honor View 20 in good light conditions.

My friend has the same problem

Excellent processor support. I would add on to my previous message.