The Pixel 3 XL has a modern design for a 2018 smartphone, although Google has taken a few liberties with it, much to the disapproval of people.

Unlike the smaller Pixel 3, the Pixel 3 XL has a notch at the top of the display, which is dramatically taller than on most phones and takes two lines worth of space on the display. Below the display is a thick bezel that is roughly the same thickness as the notch above. 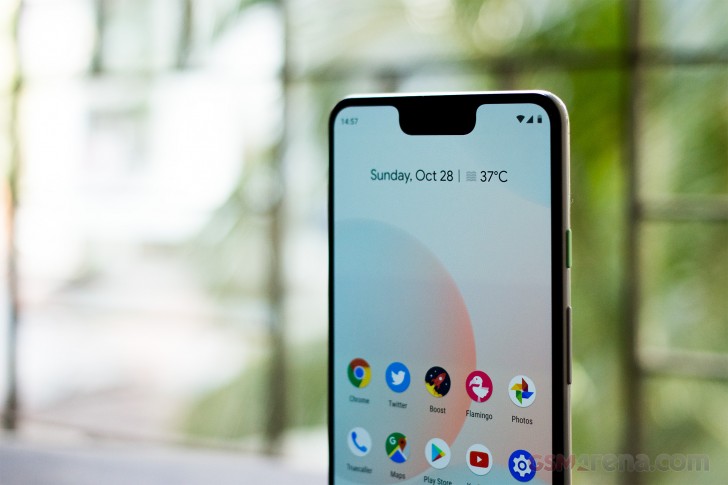 The double whammy of a notch and a thick chin seems to be the reason for displeasure in most people and we have to agree, at first glance, it doesn't look pretty. To be fair, at second glance it doesn't get any better either.

Having said that, after having used the phone for several weeks, not only did we get used to the design, we don't even notice it anymore. Once you start using the phone, your attention is on the display itself and you'll hardly even notice the notch, let alone the chin at the bottom. 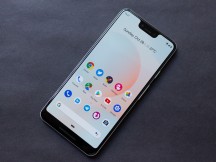 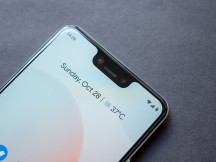 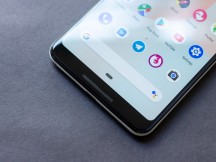 Besides, the notch is deeper for a reason, and that's due to the presence of dual cameras, a large loudspeaker, ambient light sensor and the proximity sensor being crammed in. The chin could have been thinner but we believe Google wanted it to be roughly the same height as the notch so content placed between the two would look equidistant from the sides.

Overall, it's not a pretty phone and it doesn't necessarily grow on you, either. But you stop noticing it after a while so it's really okay.

Moving on from the front of the phone, the Pixel 3 XL has aluminum sides that are painted on in a glossy finish. The paint hides any antenna lines and the glossy finish matches the glass on the front and the back.

On the right are the power and the volume buttons. As usual, Google places the power button above the volume buttons, which is the exact opposite of how most other Android manufacturers do it. We prefer it the other way around as we use the power button a lot more often and would thus like to have it below where it is more easily accessible. It also makes taking screenshots easier, as you can pretty much do it with one thumb.

The white and pink versions of the phone also have a colored power button. The white model has a mint green button while the pink version has a darker pink button. The black model comes with just a black button. We like the colored power button but preferred the bright orange from last year's white Pixel 2 XL over the green on this year's model, as that stood out more.

The other sides of the phone don't have much happening. The left side is left blank and the top only has a microphone. On the bottom is the USB-C connector along with a tray for a single nano SIM. The SIM tray does not sit flush with the body and sticks out ever so slightly even when pushed all the way in, which can both be seen and felt. We really wish Google had tighter tolerances for these things considering the price of these phones. We don't suspect it will cause any issues with water ingress but it is an eyesore. 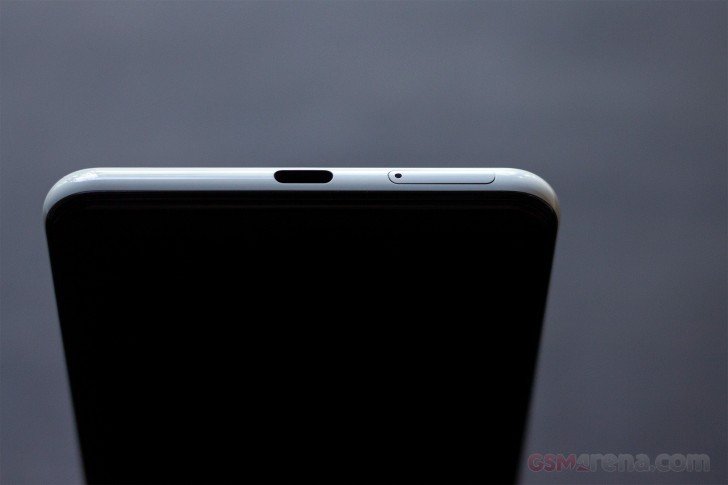 The back of the phone is its best side, and not just when compared to the front. This year, instead of having a dual glass and metal back, Google has ditched the metal altogether and gone with a single large sheet of glass. However, to keep the signature two tone finish of the previous models, the lower part of the glass that would have previously been metal is etched, which gives it a different look and texture that is reminiscent of aluminum. 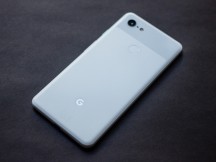 The effect this creates is stunning. First, it feels incredible to touch, with a silky-smooth texture, unlike any other glass back phone. Second, the way the glass seamlessly flows from the etched finish in the lower two thirds to the glossy finish at the top is brilliant.

Unfortunately, as with all things matte, this lovely texture comes at a price. It's very easy to scuff the back of the Pixel 3 XL and the marks show up readily. They are extremely obvious on the black model but the white and pink models hide them better. Still, they are easy to spot from certain angles and become more prominent with the help of grease from your hands. 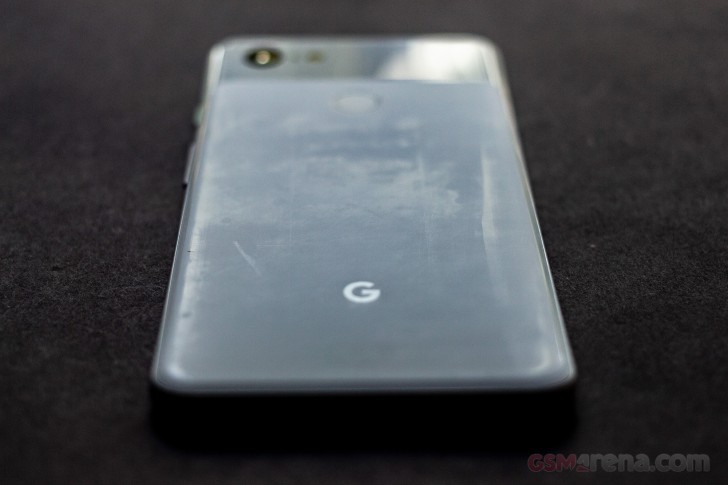 We have tried some of the techniques we saw on YouTube that supposedly let you get rid of these marks, including scrubbing the phone under running water. The marks reappeared in our case even after washing. Even if this method did work, we don't think it's a practical solution and no one should have to wash their phone every week.

Our solution is to consider getting one of the two light colors or if you must go with black then put it inside a case.

As the name suggests, the Pixel 3 XL is a big phone. It really does feel like holding a giant slab of glass in your hand, which shouldn't be new to anyone using a Samsung Note device or a Plus sized iPhone but for most people this is going to be a rather large phone. The glossy sides don't help much either and are very slippery. We recommend some caution when handling this phone.

Fortunately, the phone is very well built and finished, aside from the aforementioned SIM tray issue. It is also IP68 rated for dust and water resistance, which should come in handy when you are doing your weekly under the sink scrubbing sessions to remove the scuffs from the back.

Overall, the design could have been better but it's not nearly as bad as it's been made out to be. What is, however, is the glass back that is relatively easy to scuff, and for us that's a bigger issue. Still, overall the Pixel 3 XL is a reasonably well-designed and well-built phone that you can learn to live with after a while. 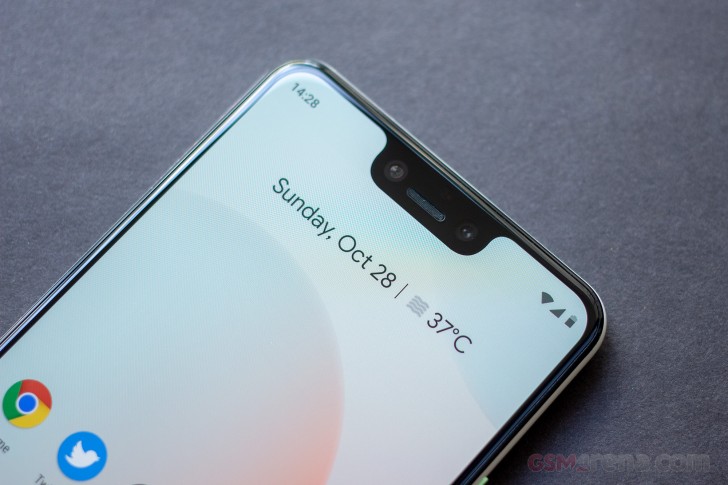 The display on the Pixel 3 XL is significantly improved from the one on the Pixel 2 XL. The colors are very accurate, especially in the Natural profile. Alternately, you can switch to the Boosted profile for a 10% saturation boost.

We also didn't notice any burn-in during our usage, nor was there any dirty screen effect observed.

However, the display does have some issues. Viewing angles are acceptable but not great. When viewed off axis, the display has a noticeable cool tone to it. This cannot be seen when using the phone normally but hard to miss when you look at the display while the phone is lying on a desk.

Secondly, the display doesn't get particularly bright. You need to absolutely max out the brightness when using the phone outdoors, and even then, sometimes it's not ideal.

We also noticed issues with reproducing darker grays. Dark gray takes on a distinct green appearance, to an extent where you would think it is dark green rather than dark gray. This issue is also present on the Samsung Galaxy S9+ and the OnePlus 6 to some extent, so it could be an issue with Samsung panels in general.

Google supports DCI-P3 color with color management built-in to the OS. However, none of the apps on Android take advantage of this. In comparison, Apple has full support for wide color in software and hardware, as well in many third-party apps. 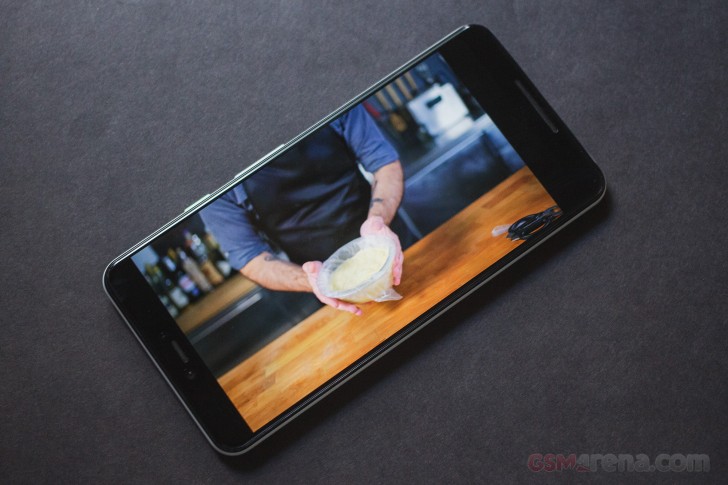 Google generally handles the notch better than other OEMs. All apps can access the area around the notch in fullscreen mode or avoid it altogether. However, should you choose to hide the notch visually, the option can only be found buried under the Developer options, inside the Display cutout setting. Toggling it on causes the entire screen to shift down and the pixels next to the notch are completely disabled. This results in a massive waste of screen space, due to which we cannot recommend using it.

All that said, the display is a massive improvement over last year but Google still has a lot of work to do if it intends to catch up with companies like Apple.

Great camera and a nice screen. However, Bluetooth is very unstable with frequent crashes rendering the phone all but useless. Google doesn't seem to plan to fix it, (link below), so perhaps time to give Apple a chance. https://issuetracker.goog l...

I used my 3XL for six months. I do agree with this review. Just adding a few personal experiences. My speaker phone is still not working. And there are many people reporting this problem. No upgrade will fix it. I tried all the branded self help...

Good review. It is technically very detailed and well written..