Pixels have never exactly been good-looking phones. Perhaps the lowest point was last year, when the 3 XL had the mother of all notches, though the small Pixel 3 remained a non-hideous alternative. With the fourth generation, the notch on the big one is gone and the two sizes look very similar. 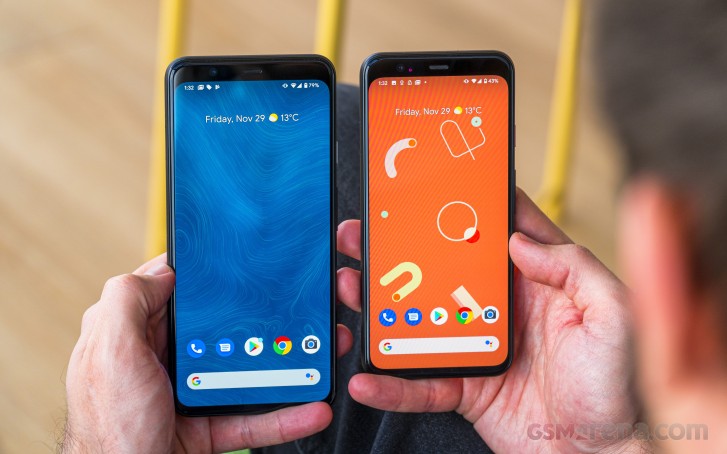 One of the Pixel 4's defining design traits is the forehead. Housing a whole bunch of stuff other than a mere selfie cam, the Pixel 4's has a distinctly top-heavy look - you've sort of been conditioned to seeing phones with chins more than foreheads. 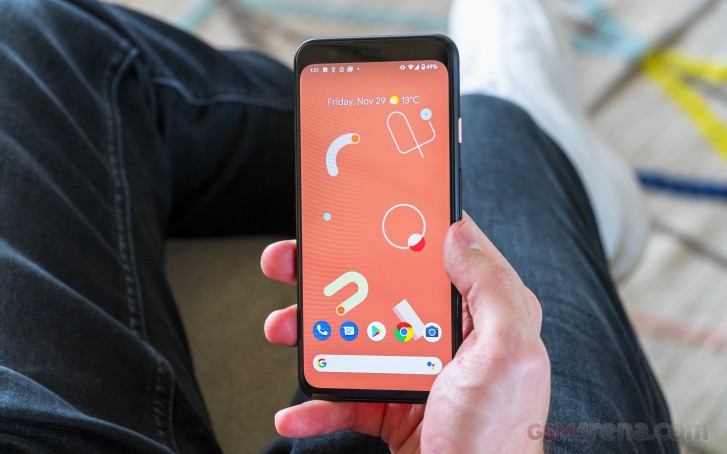 Left to right, the cutouts are home to a 3D ToF camera, the regular selfie camera, the ambient light and proximity sensors, the earpiece/second speaker and, lastly, the radar tech for the Motion Sense gestures. 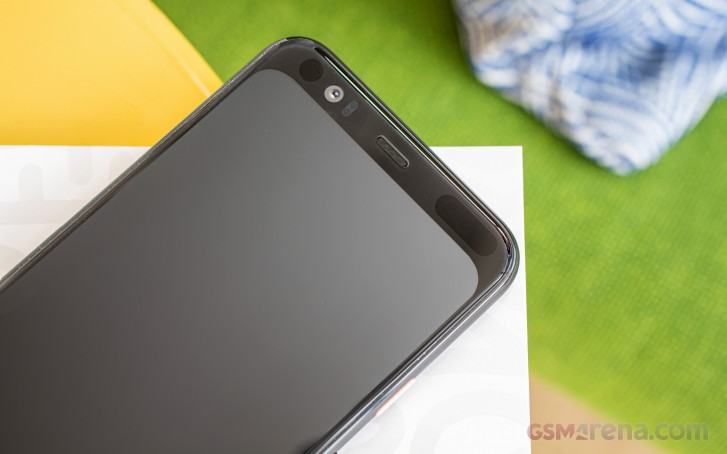 Now, if we have to scrutinize the Pixel 4's bezels, well, it's not a flagship look. It's not bad, strictly speaking, it's just that we've been spoiled by more recent Galaxies, for example, and the Pixel's meatier display outlines are a bit unimpressive. Having said that, an iPhone 11 is hardly superior in terms of bezels (plus, that notch), and a Galaxy S10e has an unsightly cutout in its top right-hand corner, so it's not like the Pixel 4 is necessarily uglier than its immediate competition. 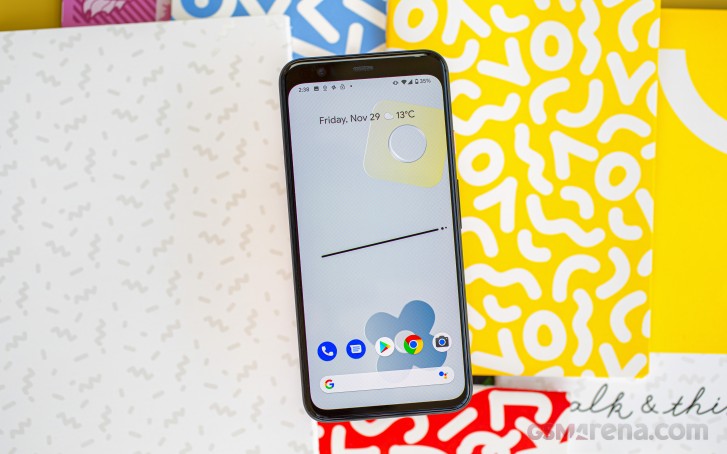 The Pixel 4 does have some nice design quirks that make it stand out. Key among those is the accented power button - Oh so orange Pixels 4s like our review unit have a pinkish power buttons, the Clearly white back goes with an orange-red accent, and the Just black color scheme has it in a contrasting white. 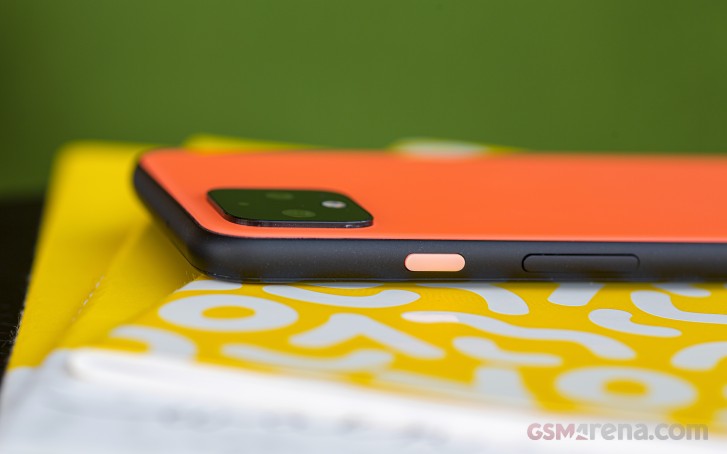 Mind you, the black version comes with a glossy back, while the other two have a frosted matte finish. The black version is where fingerprints go to stay, while the matte options are not at all prone to smudge retention, though they are remarkably slippery. Neither is ideal, but while we're debating which is better (matte is), we can't help but wonder why they couldn't all have the same finish.

Matte or gloss, the glass panel on the Pixel 4's back is Gorilla Glass 5, as is the sheet on top of the OLED display up front. All glued up nice and tight, the phone is IP68 rated for dust and water protection. 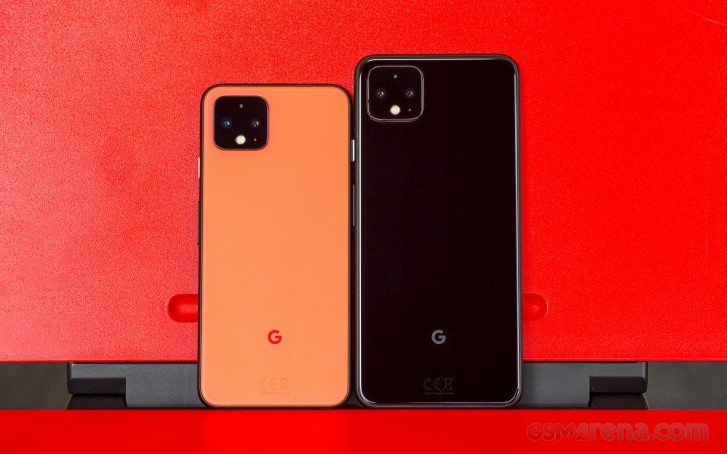 Another of the signature design choices is the square block of a camera assembly on the back. We're not saying it's pretty, it's just recognizable. The two camera modules are placed side by side, a dual LED flash under them and a spectral/flicker sensor above. An extra mic is also around these quarters. 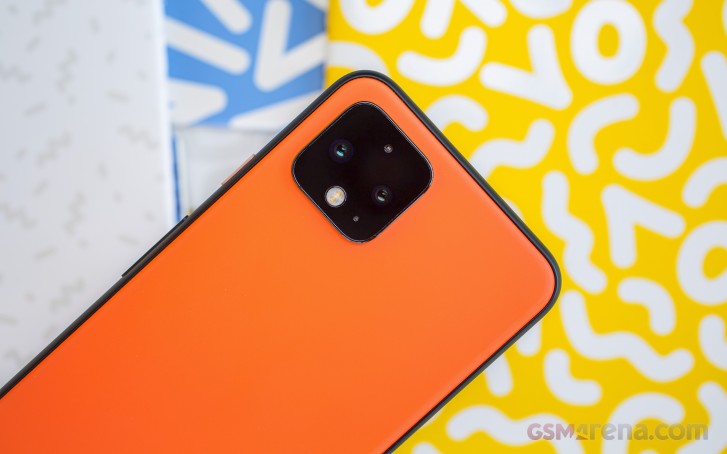 All three color options (that are the same across both sizes) do come with the same matte black aluminum frame. All hail the return of the panda - the Clearly White color scheme with the white back and the black frame is a throwback to the Pixel 2 XL's two tone paintjob, now available on the size S model as well.

As has been the case with all previous Pixels, the fourth generation has a button layout that's somewhat different than most other phones - both the power button and the volume rocker are on the right side, with the power button above the volume rocker. If you're coming from an older Pixel, you'll be instantly familiar, otherwise it might require a brief adjustment period. 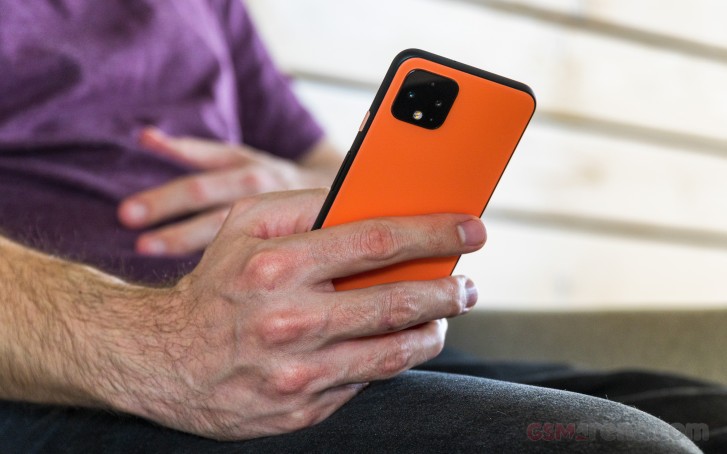 With the reassessment of the bezel situation from 3 to 4, the new Pixel has its bottom speaker relocated - it's no longer facing forward, but is ported on the bottom instead. There is a slit on each side of the USB-C port, but only the right one has a speaker behind it, the left one is for the primary mic and is only as big as the other one for symmetry. 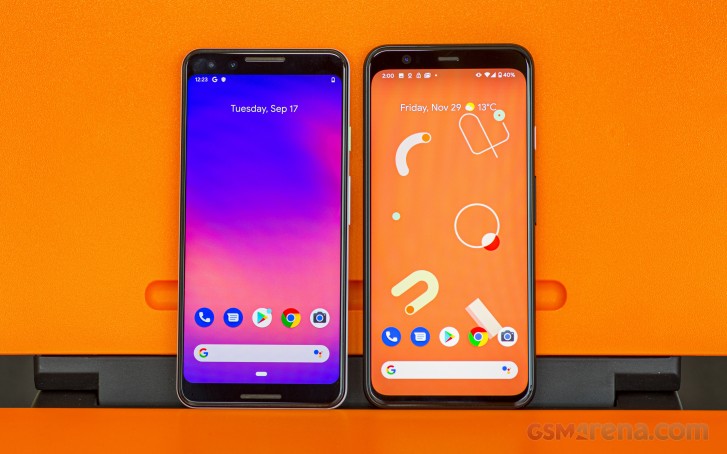 The SIM card slot is high on the left side of the phone, a small tray only accepting a single nano SIM. Technically, you can have a dual SIM Pixel 4, but your carrier needs to support eSIM - the phone only accepts one physical card. There's no microSD slot either, nor has there ever been on a Pixel.

Up top, a pinhole for the secondary mic is the one thing breaking the frame's continuity. 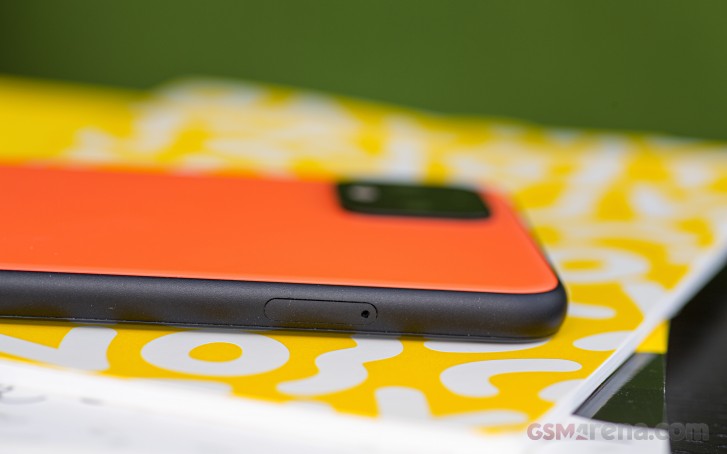 The Pixel 4 measures 147.1x68.8x8.2mm making it one of the more compact high-end phones you can buy. If we count the Galaxy S10e as a main competitor, the two feel very similar in the hand, but the iPhone 11 is massive in comparison, both in footprint and weight. Meanwhile, an Xperia 5 is about the same width and thickness as the Pixel 4, but is a full centimeter taller.

Still more beautiful Pixel 3 altough no 90hz (yes not all people have very keen eyes to detect 60 vs 90) and smaller size and lower ratio but battery is bigger, telephoto doesn't mean much while pixel shift does the job and tele will not activat...

Pixel 4 can only outperform midranger, not even the entry level iPhone 11. But true that its good for the price.

Still has better camera than 11 lineup