We're glad to see that brightness isn't an issue with the refresh rate anymore like it was with the first wave of Pixel 4 devices that would eventually be fixed with an OTA update. The responsiveness of the screen is as fluid as the display itself. 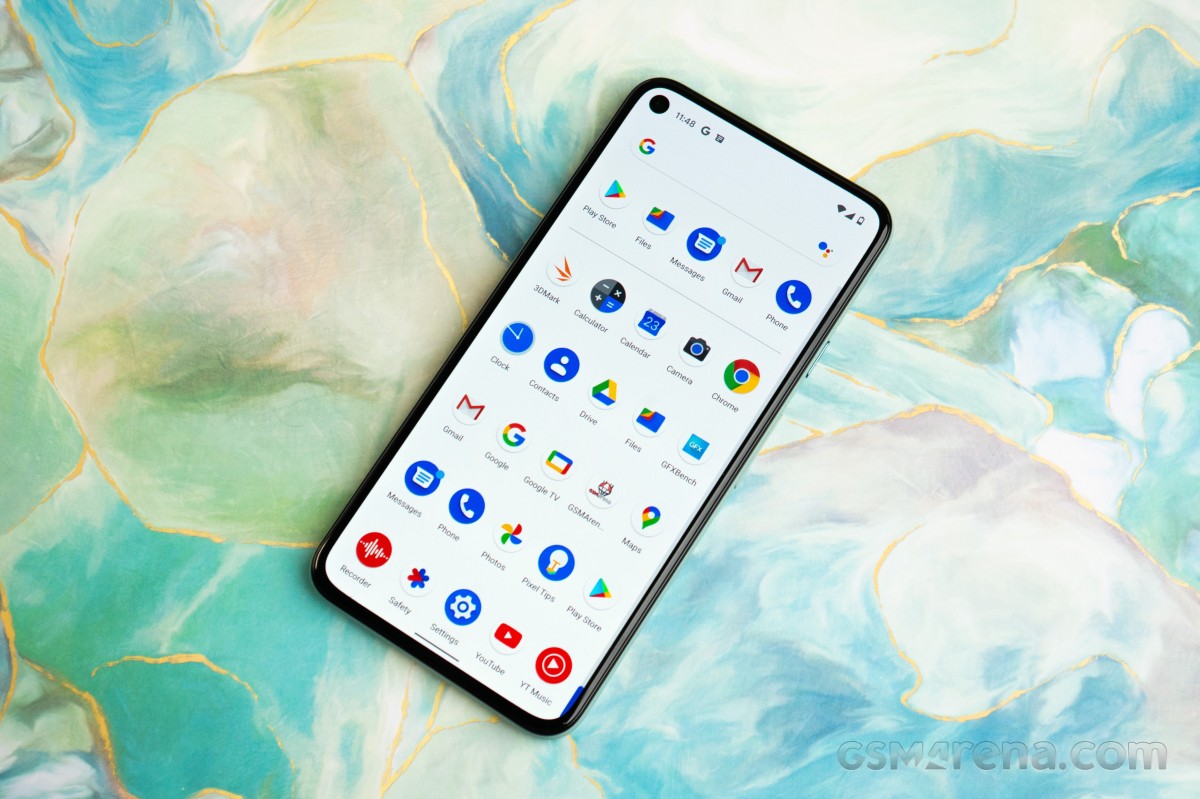 The rounded corners of the display precisely follow the perimeter of the phone, smoothly flowing around the rounded corners, thus earning Google some points for design execution. While the Pixel 4a had a slightly larger lower bezel than the rest, the Pixel 5's bezels appear uniform all the way around.

The display sees no noticeable color shift when turning the screen about until around the 45-degree mark. Even then, a slight blue-shift is barely noticeable. There's also no discoloration to report in the surrounding area of the punch-hole selfie camera.

Color accuracy is excellent on the Pixel 5. In the default "Adaptive" mode, whites were not tinted blue as we've found to be a trend in many smartphones. Colors are deep and vibrant with great contrast. Adaptive mode yielded an average deltaE of 3 with a maximum of 6.1 in the DCI P3 color space. The "Natural" color mode is very close to accurate based on the sRGB color space. There was an average deviation of 1.9 and a maximum deviation of 3.1 with the Natural setting. 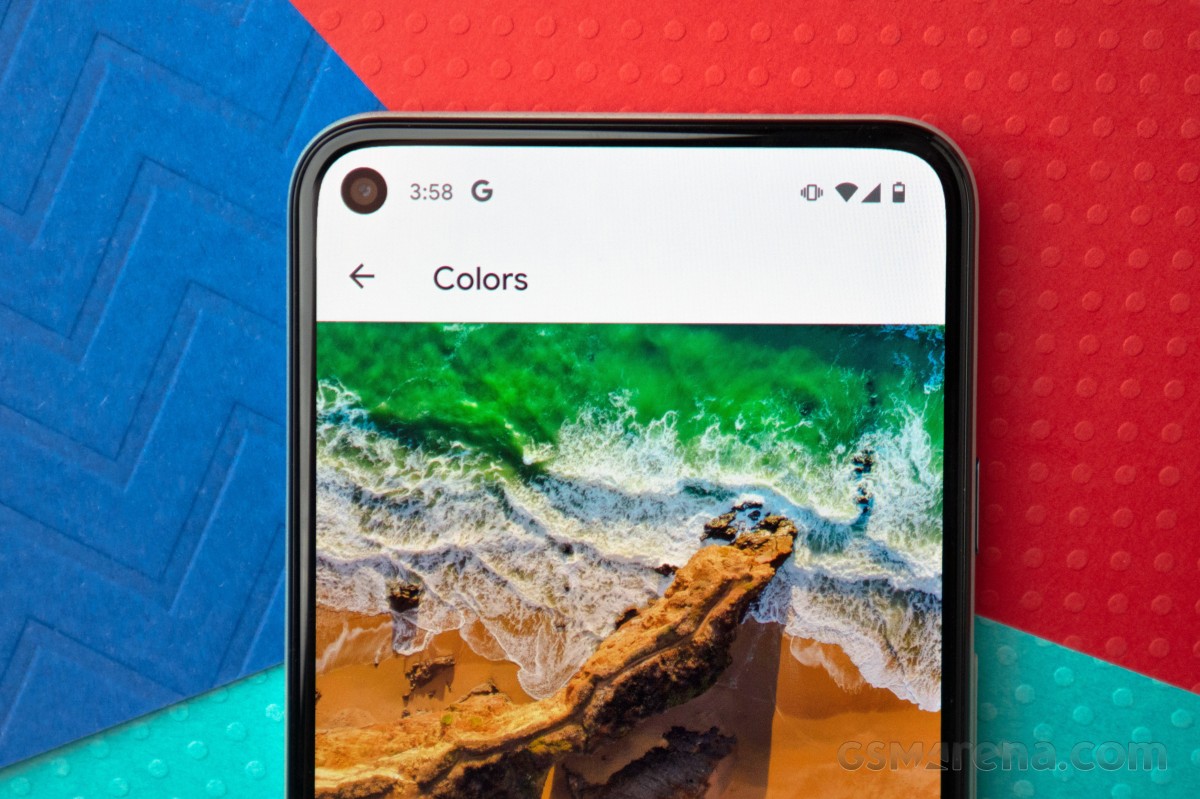 A "Boosted" profile is also available, in case you think the Adaptive setting is too vivid and the Natural setting is too dull. Although there's no customizable color tuning for the Pixel 5, the three options keep the choices simple.

Pixel phones before the Pixel 4a were unable to get brighter than their manual slider allowed them to, even if the "Adaptive Brightness" setting was activated. With the Pixel 5, the display will crank up to higher levels when exposed to direct sunlight.

With the manual brightness slider, the Pixel 5 display achieved 475 nits. Meanwhile, with Adaptive Brightness set to ON, the display could go as high as 699 nits. While that's less than the Pixel 4a, it's still vastly better over the Pixel 4 and 4 XL's numbers. Sunlight legibility is no longer an area of compromise for this Pixel phone.

Note: We updated the battery numbers for 60Hz and added new numbers for when the display is set to always run at a 90Hz refresh rate.

When we look back to the Pixel 4's 2800 mAh power pack or the Pixel 4 XL's 3,700 mAh battery, the Pixel 5's 4,080 mAh cell is already larger than both. This, along with other factors like the power-efficient chipset, smaller display, and lack of power-hungry Motion Sense hardware, contributed to longer endurance for the Pixel 5. Battery life has always been a weak point in every Pixel flagship from the Pixel 4 and before, and Pixel 5 is a massive leap in the right direction.

We are glad to report that the Pixel 5 has the best battery life of any Pixel we have tested since the Pixel 3 XL. 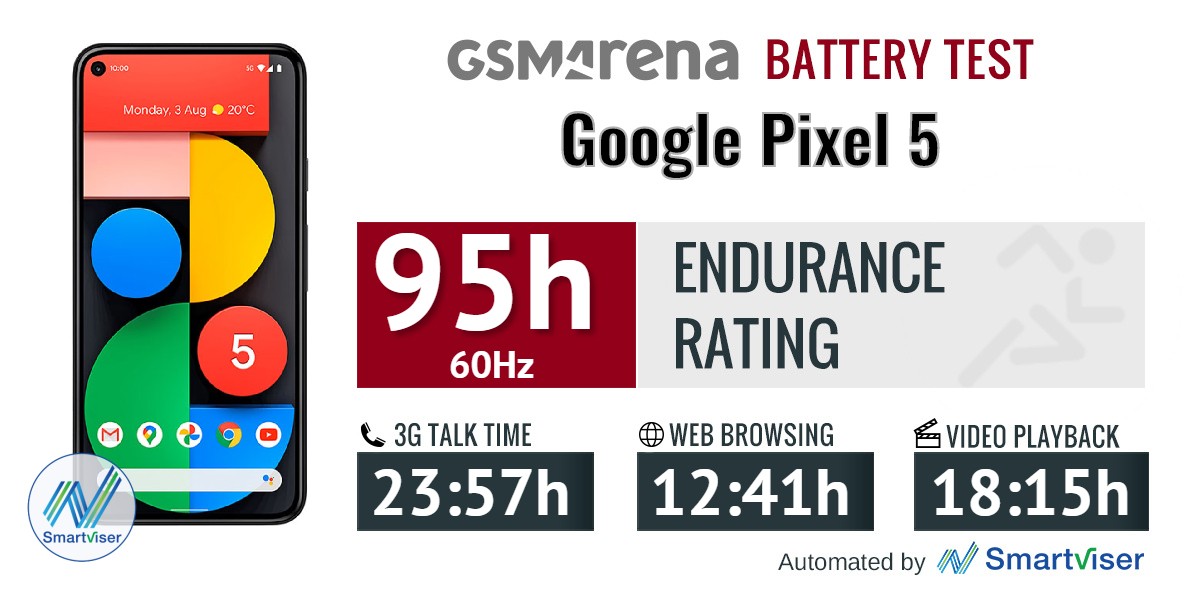 Even with Smooth Display enabled, our on-screen tests don't run in full 90Hz refresh rates. It's worth noting that the Pixel 5's display will only spike back up to 90Hz as soon as the display is touched such as when swiping out of a video or when you resume scrolling Twitter.

In the 60Hz numbers, the phone yielded 25:54h of call time, 12:41h of web browsing, and 18:15h of video playback. Thanks to strong standby numbers as well, the Pixel 5's larger battery and lower-power chipset contributed to a significant boost in the battery endurance over its predecessors, reaching an overall rating of 95h.

To calculate the following number, we enabled a developer option that allowed us to force the display to run at 90Hz at all time. This did tax the on screen tests, but only marginally. 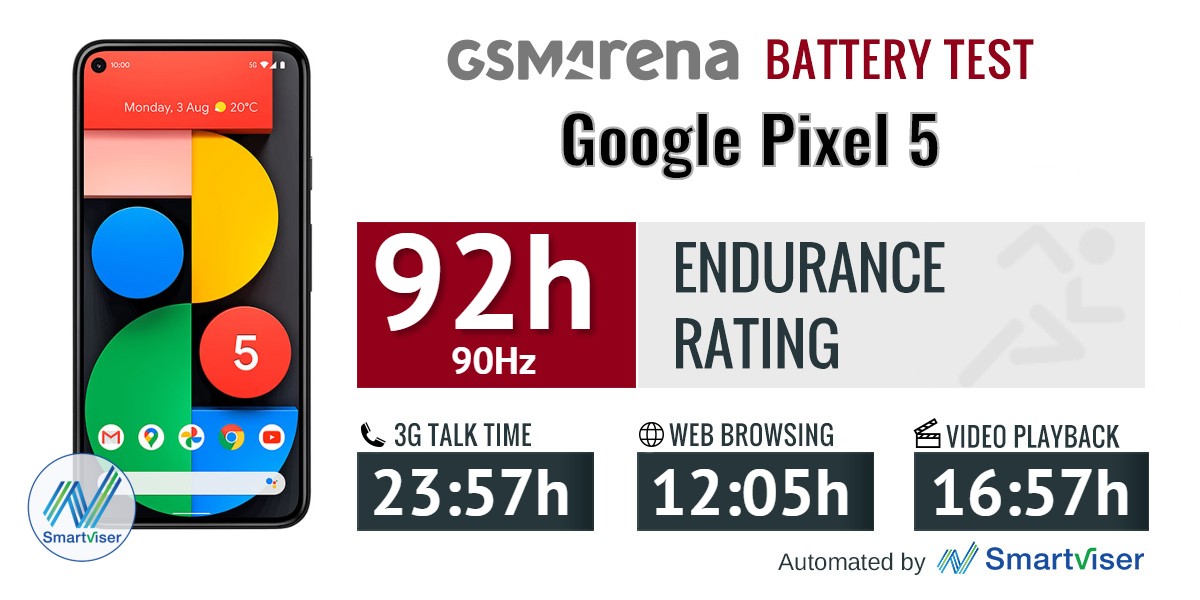 With the Smooth Display forced always at 90Hz, we saw an overall endurance score of 92h with 12.05h of web browsing and 16:57h of video. Since we only recalculated the on-screen tests, the call and standby scores are consistent between overall scores.

We can't say this is the best battery performance we've seen from the Snapdragon 765G, especially considering the relatively small screen.

Our battery tests were automated thanks to SmartViser, using its viSer App. The endurance rating above denotes how long a single battery charge will last you if you use the Google Pixel 5 for an hour each of telephony, web browsing, and video playback daily. We've established this usage pattern so that our battery results are comparable across devices in the most common day-to-day tasks. The battery testing procedure is described in detail in case you're interested in the nitty-gritty. You can check out our complete battery test table, where you can see how all of the smartphones we've tested will compare under your own typical use.

The Pixel 5 ships with the same 18W USB-C Power Delivery charger that shipped with the very first Google Pixel phone. With that, the Pixel 5 went from a depleted battery to 41% in half an hour. It took a total of 1:35h to fully charge the new Pixel.

Perhaps Google prefers the balance of charging speeds and degradation of battery over time. Even so, speeds are decent enough, and the added battery endurance makes up for the charging speeds achieved by other proprietary charge standards. 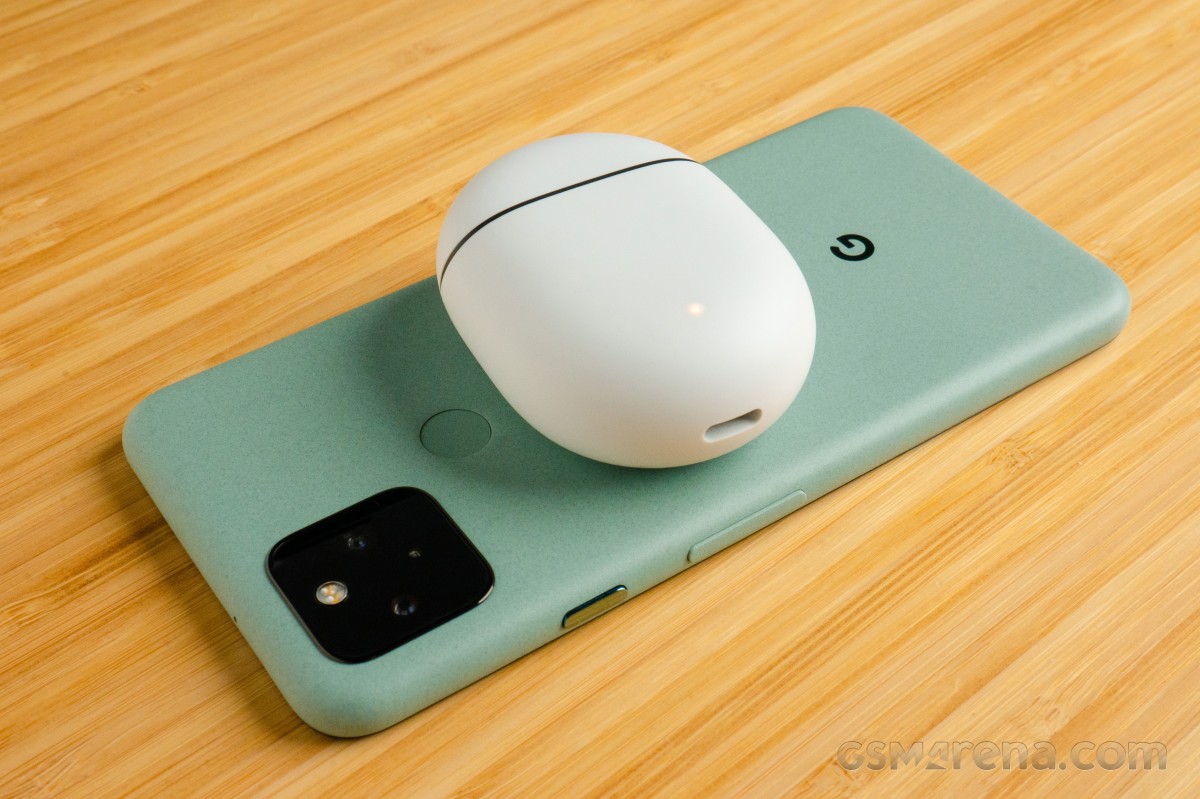 Unfortunately, this phone review has been carried out in the US - far away from our usual office test lab - we are not able to provide a speaker test and recording for this phone. We will update this section as soon as we get a European review unit.

I think this phone is great. I have both of the 4 phones and this is quicker than either of them. I was actually worried about the "slow chip". No need, opens everything very fast and recalls open apps with amazing speed. If you look at spe...

I bought this in the beginning of February after Cricket decided to shut down their 3g towers & their 4g towers started to slow down, they said my account would be suspended after the 22nd even tho i had a Pixel 4a running on 4g prior to buyin...

Yeah... of course I will check second hand market, that's what I always end up doing because all the phones available in my local retailer are full of cr*p, and the only good ones are available on eBay, where there are dodgy sellers.