Google reveals list of Android Wear devices already getting Oreo, and those that will get it

While it was announced last week that the Oreo update has started rolling out to Android Wear devices, what wasn't clear was exactly which devices are getting it. Well, Google has now officially revealed the list.

In addition, the company has also announced the list of wearables that will be getting the update in the future. It's a long list containing names like Casio PRO TREK Smart WSD-F20, Casio WSD-F10 Smart Outdoor Watch, Diesel Full Guard, Emporio Armani Connected, and Fossil Q Control. 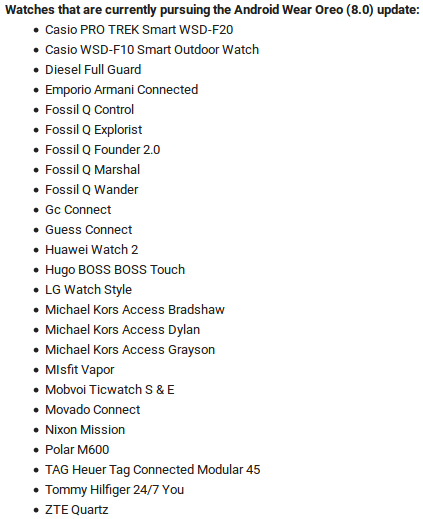 WTF... No Huawei Watch ? I mean half of the people who own smartwatches actually has huawei watch and you ditched it !