Google is cleaning house – starting on August 1 2019 it will no longer accept new apps or app updates that do not support 64-bit processors. You will still be able to download the old versions of those apps, however. Note that games built with Unity 5.6 or older will be exempt from this and can still be updated.

There's a way around this - 32-bit only apps can be updated, but they won't run phones with Pie (of which there will be plenty after the MWC). This makes it less likely that developers will be willing to put in the work. 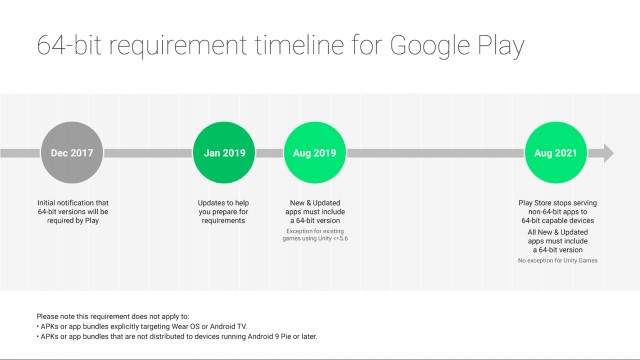 Also, from August 1 2021 Google Play will stop serving apps without 64-bit support. That’s for new phones, old 32-bit only phones will still be able to download the apps, though we have to imagine they will be terribly obsolete by then (the 64-bit switch-over happened in 2015).

Wear OS and Android TV devices will not be affected by this change as those are stuck on 32-bit for now.

Google will require that apps support Oreo features in 2018, 64-bit chipsets in 2019

i mostly use it as a test subject(no sensitive info on it and i install almost any thing on it) an if the app was good enough it would be installed on my note 8! i hope you see my point!

you are correct my friend! After all that little thing is 7 year old and hold up until now very well!

The new rules only limit exclusive 32-bit app support after August 2019. You will still be able to install 32-bit apps on your Nexus 4 with Pie even after August 2021, because your phone is not 64-bit capable. Whether developers still want to support...