The 6.1-inch OLED can be bright and color-accurate

Huawei appears to have made the switch to OLED for all its top-tier smartphones, following three generations of Pro Mates, and a P20 Pro last year. Well, now, even the non-Pro P30 has an OLED display and we only need the upcoming fall's vanilla Mate to confirm the full transition. 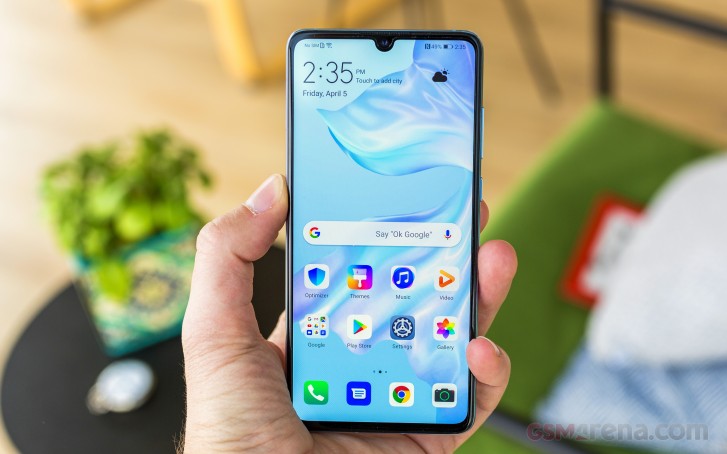 The P30's panel measures 6.1 inches in diagonal and has a 1080x2340px resolution in a 19.5:9 aspect ratio - that would be a density of 422ppi. It's got a relatively small notch in the muddle of the top edge and rounded corners all around.

In our testing, we measured a maximum brightness of 449nits when in manual mode - noticeably lower than the Pro's result, but well in line with other OLEDs. The P30 can boost its brightness higher than the P30 Pro when in auto and under direct light and posts a rather respectable 635nits. The Mate 20 Pro and the LG G8 ThinQ can go that extra few nits higher, while the Galaxy S10 is far from anyone's reach at the top. As it should be, there was no measurable illumination of the blacks - a phenomenon we've observed with some OLEDs in the past.

Minimum brightness on the Huawei P30 is 1.7nits, which is great for using the phone in complete darkness. Just make sure you don't leave it like that as may not be able to see anything in the morning.

We had zero issues with using the phone outdoors - even framing photos out in the sun was a doable task.

As is common with recent Huaweis, the P30 has two color modes - Normal and Vivid. Each of those also has three sub-modes - Default, Warm, and Cold. The out-of-the-box state is Vivid/Default and we measured an average deltaE of 5.0 when displaying sRGB target swatches. This mode has somewhat bluish whites, but not the worst deviation we've seen (deltaE of 7.0).

If you opt for the Normal/Default combo you'll get an overall more truthful sRGB rendition with an average deltaE of 1.8 and a maximum of 3.8. However, whites have a slight greenish tint. You can improve things and get nearly perfect whites with the custom setting below (average deltaE of 1.5, maximum 3.0, grayscale within 1.5 too).

The P30 puts its battery to good use too, almost making it to 14 hours in our web browsing test and the 16+ hours of video playback is also a great result. The 22:38h figure in voice calls is less impressive, though still perfectly acceptable. The overall Endurance rating works out to 83 hours - not quite the Pro's 100h.

The P30 Pro does outlast the P30 in all disciplines, but the vanilla model's results look pretty great against competitors. The P30 can do 5 hours more in video and 4:30h more on the web when compared against the G8 ThinQ, while the Galaxy S10 calls it quite 3:30h earlier than the P30 in either of these disciplines. The G8 does have a couple of extra hours in the talk time box, while the S10 falls an hour short of the P30. The iPhone XR gets the closest to the P30 in the screen-on tests, but it's still not quite there with its 13h of web browsing and 15h of looping videos. 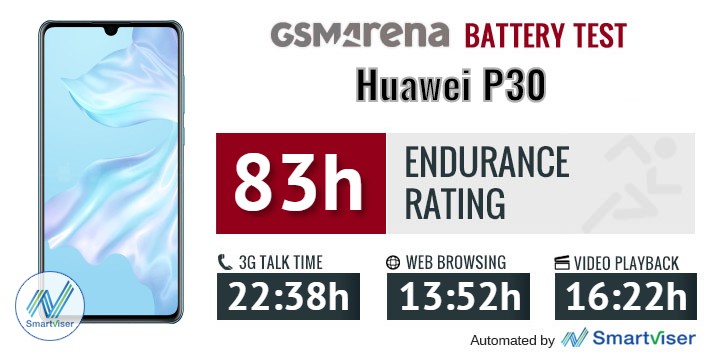 Our battery tests were automated thanks to SmartViser, using its viSer App. The endurance rating above denotes how long a single battery charge will last you if you use the Huawei P30 for an hour each of telephony, web browsing, and video playback daily. We've established this usage pattern so that our battery results are comparable across devices in the most common day-to-day tasks. The battery testing procedure is described in detail in case you're interested in the nitty-gritty. You can check out our complete battery test table, where you can see how all of the smartphones we've tested will compare under your own typical use.

The P30 ships with a Huawei SuperCharge adaptor capable of outputting up to 22.5W of power. We clocked 1:12h for a full charge from flat, with the battery indicator showing 65% at the 30-minute mark - great numbers that none of the above phones can match. Well, excluding the P30 Pro, obviously - its higher-tier 40W SuperCharge power brick does a full charge in an hour flat, and you're looking at 70% 30 minutes into it.

You'd think that the P30 with its conventional earpiece would sport the stereo setup of previous Huaweis where the earpiece would double as a second channel in a stereo pair. We get that it's not quite possible on the P30 Pro with its acoustic screen piezo speaker, but why not the vanilla P30? We gather it's just Huawei not wanting to make the P30 Pro look bad by missing a feature that the lesser model has, but the end result is that the P30 has a single, bottom-firing speaker. 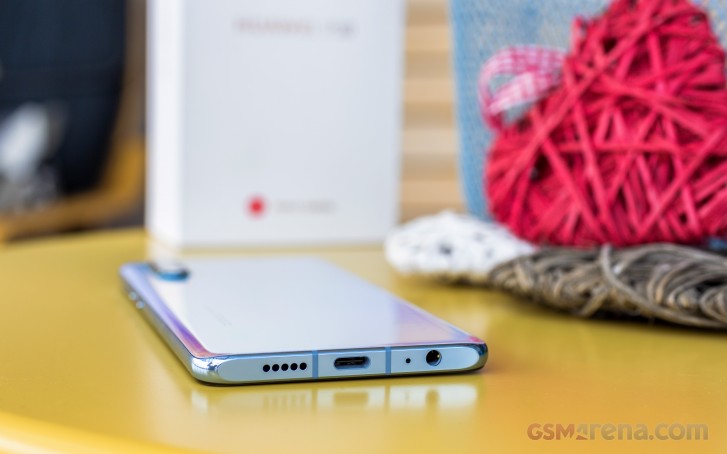 It may be single, but it's also very loud - the P30 test results placed it into the 'Excellent' bracket, where all current top-end phones are. The P30 also sounds nice and full-bodied, and doesn't distort at max volume. Now, if only there was one more speaker.

The Huawei P30 clearly has the same audio signal processing as its Pro sibling as the output of the two is very similar. The vanilla version still managed to slightly outscore its more premium sibling in the active amplifier test, though at this point of excellency it will make little difference in real life.

Unfortunately the volume levels were just as uninspiring on the P30 as on the P30 Pro. It’s only just above average, which is hardly a welcome sight on a flagship these days.

On the upside headphones did less damage to the stereo quality on the P30 than they did on the USB-C-outputting P30 Pro. The smaller Huawei flagship still had more crosstalk than many of its rivals, but it wins the battle against its sibling.

it's good, worth buying. I've been using it for about 2 years. Hope I won't need to change it

Mine starting to slow down :( 3 years is the longest I think I've ever had a phone.

Me too, perfect phone and still going...