Looks-wise, the Honor 10 is as trendy as it gets - a glass phone with a screen with minimum bezels. Unfortunately, this also means there is a notch on top of the screen. And while the jury is still out on the appeal of this particular design feature, the makers' confidence with it seems to be growing stronger. 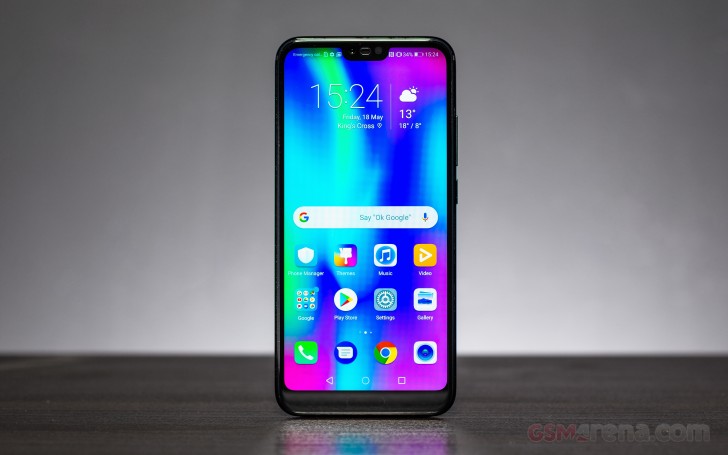 The Honor 10 is an all-glass smartphone by the book - two such panels sandwich a polished metal frame. Apply curves wherever possible, trim the screen bezels, carve out a notch, and there, welcome to 2018.

The Honor 10's footprint and weight are the same as the Honor 9's, yet it packs a larger screen and battery, better camera and chipset. Keeping the same footprint was easy because of the notched panels expansion. And while we are comparing phones, the Honor 10 also shares the same measurements with the P20 but the weight - the Honor is 12g lighter at 153g.

The front side is the most interesting part of the Honor 10. The 5.84" notched screen is the first thing to notice. It's becoming the popular choice lately. The screen is slightly larger than the one on the P20 and taller in resolution. But more on that later. 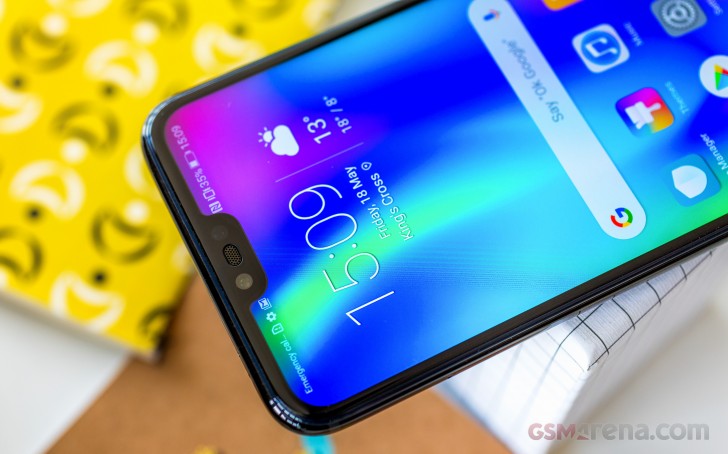 The notch houses the same 24MP selfie snapper as seen on the P20 and P20 Pro. Next to it is the earpiece and a couple of sensors. A super tiny notification LED is also around.

Below the screen is probably one of the more exciting bits of the Honor 10 - the ultrasonic fingerprint reader, which sits entirely under the glass. Since there is no cutout for this sensor, Honor decided to mark the spot with tiny white dots. Those are visible only upon a closer look, but they are a bit of design spoilers to us. 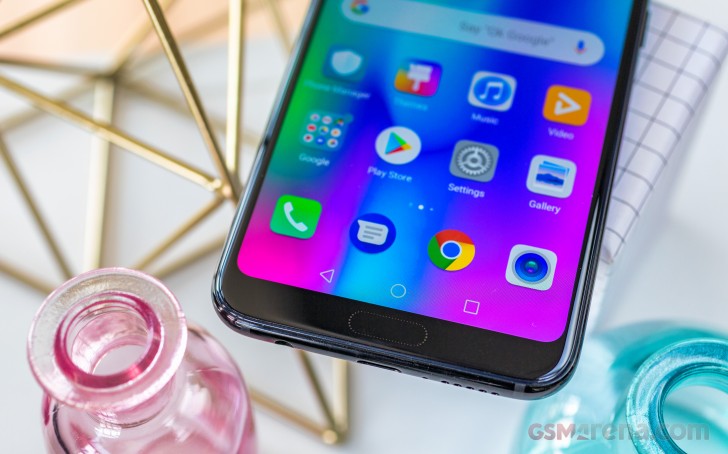 The sensor reading is slower than what we're used to experience with Huawei's solutions. It should have the same accuracy and is always-on, but sometimes you just need to press harder for it to register your finger. Well, the looks always have a price, we guess. And if you enable Face Unlock as we did, you'll rarely resort to fingerprints. 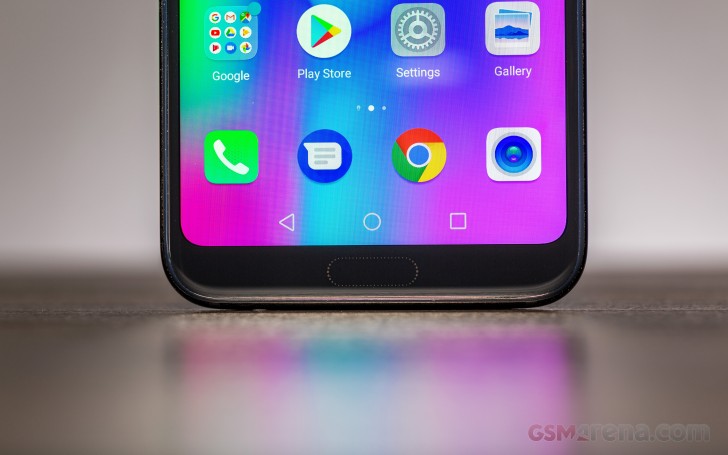 But since this fingerprint reader also doubles as a trackpad for navigating the UI, its sluggish performance takes a toll on the OS gestures, too. Don't worry; it's nothing that bad - the taps are always recognized, but sometimes we had to press for the swipe gestures (Task Switcher). No big deal, but the overall operation is not as smooth as on the P20s.

Huawei was among the first makers to embrace the gradient paint jobs and Honor continues to evolve those. While we have the rather mainstream Midnight Black in for review, there are two stunning color-shifting Phantom options available - Blue or Green. Those are equally as spectacular as the ones on the P20, and we'd have some hard time if we need to justify getting the Boring Glacier Grey or Incognito Midnight Black versions (ours being the latter). The options are there, though, if you're that person. 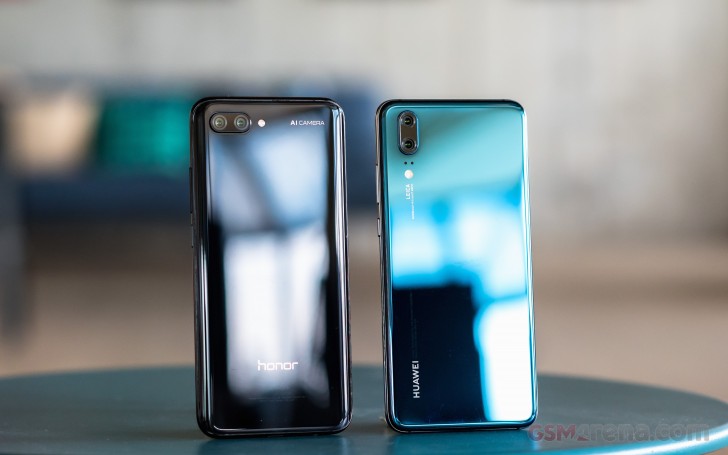 While the screen has no fancy curves, unless we count the so-called 2.5D edge, the back is noticeably bent towards the aluminum frame. Those curves make the Honor 10 look and feel thinner than it actually is. 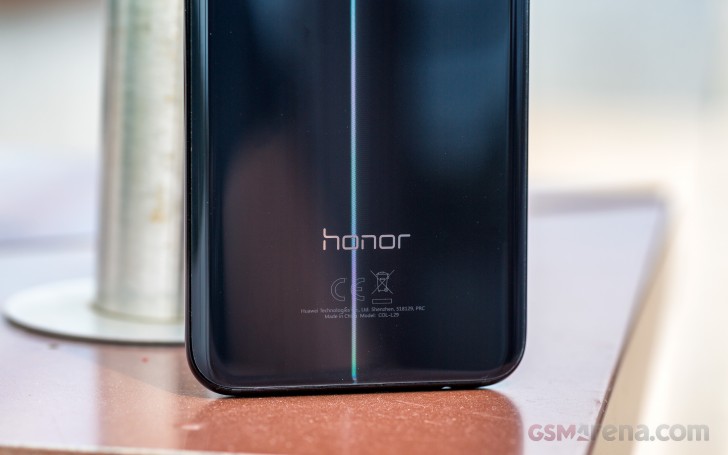 Another attention grabber at the back is the dual-camera setup with the AI CAMERA lettering on the back. 'Beauty in AI' is the Honor 10's tagline, and yes, AI has a been a mandatory buzzword this past year. And that's fine, but we'd rather keep those promos for the ads instead of inscribing them on the devices themselves. 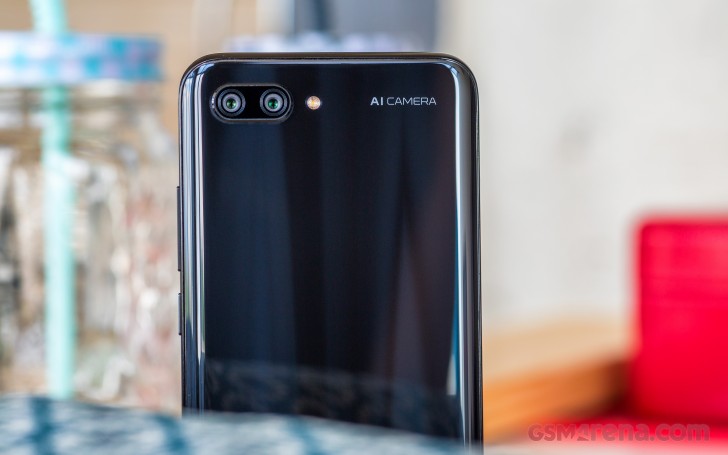 Finally, the metal frame is all glossy and curvy, and while this is a looks booster, it's also a grip killer. The Honor 10 is a beauty, that's for sure, but it's comes at the expense of poor grip. Keeping it in a case certainly helps in this regard but as usual, it takes away from the overall looks.