As one would expect, the Honor 10 Lite comes with Huawei's user interface EMUI and on contrary to a lot of midrangers out there, the device comes with the latest and greatest from Google - Android 9.0 Pie. The UI is also updated to its latest version although, there aren't any major differences compared to the older EMUI 8 with which we've tested the vanilla Honor 10.

Like all EMUI-driven devices, you can set up a magazine lockscreen style that changes the picture every time you wake up the screen. Sliding from the bottom will bring out quick shortcuts to some commonly used utilities and you can re-arrange, add or exclude to your liking. We found it to be useful and a bit annoying at the same time because there were times when we just wanted to unlock the phone but bring out the menu instead. 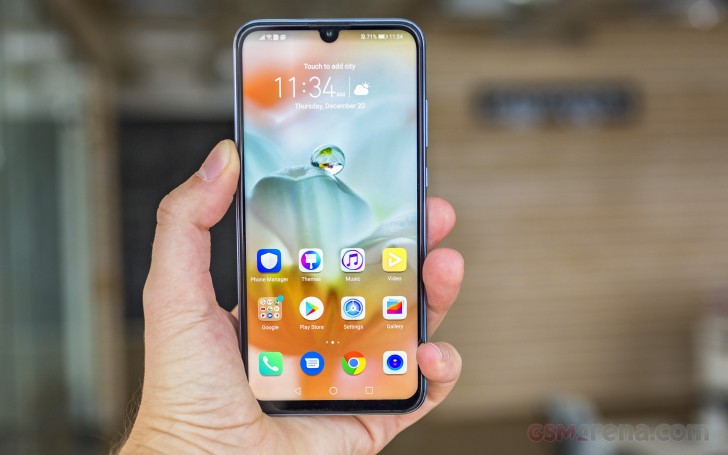 Unlocking the phone will bring you to the Home screen where you will find all of the installed and system apps. There's a toggle in the settings menu that lets you choose between the standard layout or a Home screen with an app drawer. This is a really neat option to have as some people prefer the app drawer.

Swiping to the right from the home screen will bring you to Google Feed and by swiping downwards will let you search in your app library.

As for the notification shade, there's an option in the settings menu that enables a swipe gesture on the fingerprint reader and really helps a lot with the one-handed operation. Also, it works really well. No more reaching for the top bezel when using this tall 19.5:9 screen.

And as for the notification shade - it's nothing out of the ordinary. It can fit three rows with five quick launch icons for each row and right under the icons, you will find the screen brightness slider.

Opening up the settings menu will greet you with the usual sub-menus and features that you would find on most EMUI-based phones. There are a couple of useful options in the "Home screen settings" such as themes, the option to choose between an app drawer or the standard app arrangement on the Home screen as well as the option to toggle off the Google Feed.

The "Display" sub-menu is rather basic with little to no options in there. You've got the Eye comfort option that limits the blue light emissions during the night, choose between Normal or Vivid color modes and adjust the screen resolution - you can lower it to HD+ (720 x 1560) but our numerous tests from the past show little to no difference in the battery savings if you opt for the lower resolution setting.

More importantly, the option for disabling the notch is buried deep in the Display menu and we didn't find the option swapping the navigation software buttons for gestures.

Moving on to the "Battery" section, you will find plenty of stats and a moderate amount of options to play with. There's a normal power saving mode and "Ultra power saving mode". The latter strongly limits the device's capabilities and lets you use only a handful of essential apps, disables background processes, animations and turns of radios. The battery usage menu will give you all the information you'd need - you can see which apps and hardware components drained the battery since your last charge.

We found the "Digital balance" in the Settings menu quite nifty. You can track how much time you spend on your phone and which apps you used the most.

The "Security and privacy" menu lets you set up a fingerprint, enable face detection, set up "Find My Device" option, etc. The fingerprint setup process is pretty straightforward but it also brings some additional features like the option of taking a photo with the fingerprint reader in the camera app, stop the alarm, answer a call, browse photos in the gallery and as we already mentioned, bring down the notification panel. The latter is quite useful and works 9 times out of 10.

The fingerprint itself performs excellently as well - it doesn't take a lot of time to recognize your finger but it lags a little when unlocking.

The face detection works just as good and there's an option in there that enables instant unlock when it detects your face or requires a slide before unlocking. Of course, both lock methods can be used not only for unlocking the device but also a set of apps to your liking.

And last, but not least, comes the "Smart assistance" menu that takes you to the so-called "Motion control". The latter enables motion gestures like flip-to-mute or raise-to-wake.

With every heavily-customized software come a few pre-installed system apps. In this case, they are generic tools like FM Radio app, Calculator, Calendar, Music, Videos, Clock, Notepad, Email, Files (file browser) and a Phone Manager that gathers some important functions in one place.

As you can see, even for this price, the Honor 10 Lite offers plenty of features and bonus points for the up-to-date software. But we did notice some small annoyances over the course of our testing. For instance, the radio icons appear in the upper left corner of the screen due to the insufficient space around the notch.

Also, the UI doesn't feel as responsive or fluid as it should be. The Kirin 710's CPU is more than capable chipset so we guess it's all down to pending software optimizations.

Aside from that, the UI is highly customizable and you can adjust a lot of settings to better suit your needs though we have to admit, the Honor 10 has a few extra software features on top of what's available in the 10 Lite.

The Honor 10 Lite comes with the new in-house mid-range SoC, the HiSilicon Kirin 710. It incorporates an octa-core CPU in a 4/4 arrangement - 4x big 2.2 GHz Cortex-A73 cores and 4x smaller and more efficient 1.7 GHz Cortex-A53 cores. The GPU is Mali-G51 MP4 and the whole SoC is based on a newer 12nm manufacturing process.

When it comes to memory, our unit runs with 3GB of RAM and 64GB of internal storage. However, there are versions with 128GB of storage and 4 or 6GB of RAM.

Unfortunately, we couldn't benchmark the performance of our review unit due to system limitations imposed by the software it shipped with. We are guessing it might be one of the earlier builds and Honor just doesn't want it benchmarked at this stage. Still, we recently reviewed the Honor 8X and since they share the same Kirin 710 chipset and the screen resolution, we suggest you check out its performance figures as they should be identical to those by the Honor 8X. You can check out its benchmark scores over here.

No. Plastic only. It is an inexpensive phone after all.

Had this phone for nearly 4 months and I love it. I previously had the Honor 9 Lite (dropped it, broke screen, bad repair meant screen began separating after 3 weeks, took it back to repairer but shop had closed down) and the 9 Lite is great value fo...