Following up on the Magic V from the start of 2022, Honor just announced an improved version of its large-size foldable marked by an 's' - the Magic Vs. Developments are advertised in many areas, including build, displays, and, in a way, the camera system.

With the phone scheduled for a market launch on November 23 in China, however, there are still a few things to be ironed out on the software side, and the unit we have here is not review-ready just yet. The hardware is very much hands-on-ready, we've been assured, so we'll settle for that.

But let's quickly go over the key changes first. A gearless hinge has replaced the geared one of the Magic V - Samsung made a similar move going from Fold3 to Fold4 - bringing the number of components down from 92 to just 4 (though there has to be some semantics in there to explain the new component count). A switch from aluminum to magnesium and titanium, meanwhile, has helped shave off some 10% of the V's weight.

The displays are now brighter, with a 800-nit peak claimed for the foldable panel and 1200 nits for the outer one, though the internal screen does remain capped at 90Hz - Samsung's is 120Hz. We will do some brightness testing later on, as we understand that to fall under the hardware category. Plus, comparisons are explicitly encouraged in the press materials we got.

We won't be looking at camera samples, sadly, but that's one of the areas where the Vs brings some changes over the V. There's now a telephoto camera, albeit a modest 8MP 3x one, in place of the 'ultra-spectrum' 50MP module on the Magic V that we never quite got to experience. The ultrawide remains the same, but the primary camera is new for this generation foldable - by the looks of it, the 54MP unit is shared with the Honor 70. A couple of 16MP selfie cameras, one punch hole per display, bring the tally up to 5 cameras. 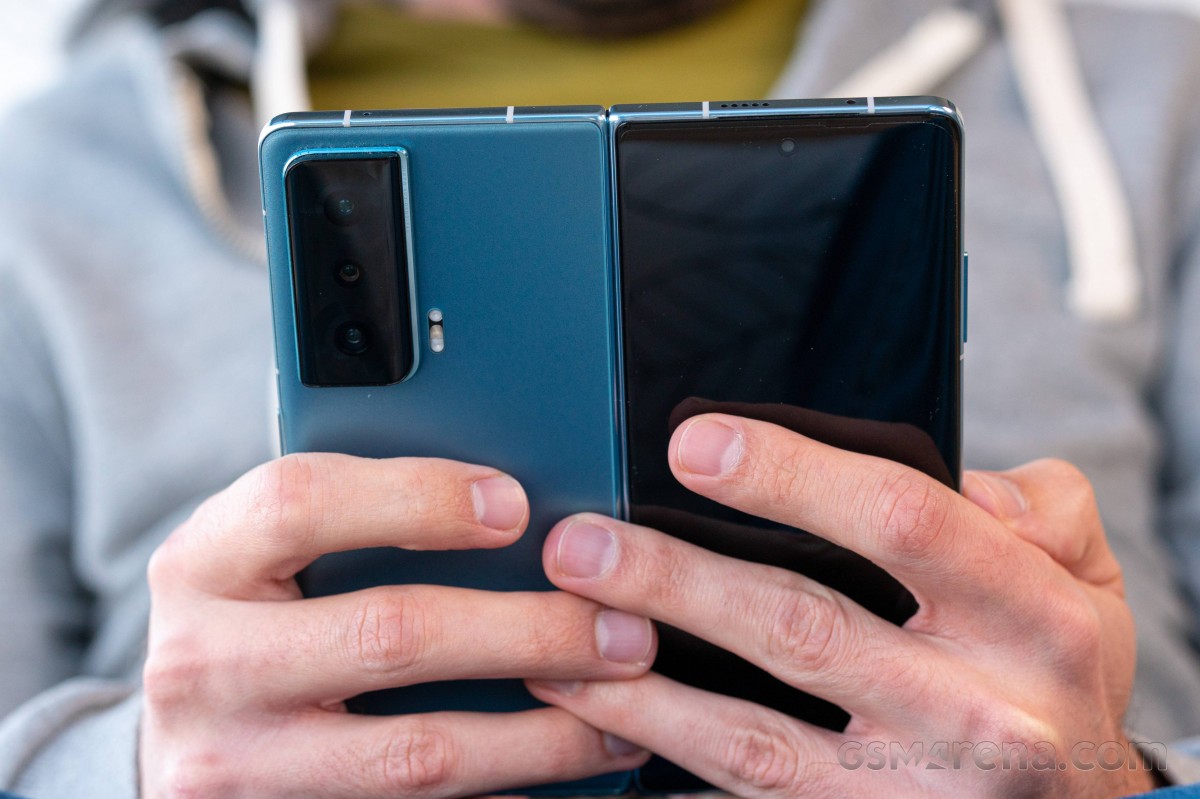 The Magic Vs also gets a chipset upgrade from the Snapdragon 8 Gen 1 to the plus version - perhaps it's too early for Honor foldables to be getting the Gen 2. A welcome battery capacity bump sees the number go from 4,750mAh to 5,000, while the 66W charging should help keep the time you spend tied to the wall reasonable.

Honor Magic Vs specs at a glance:

The Magic Vs ships in a large black cardboard box with a fine striped pattern and a matte finish. Inside, the handset lies unfolded in a tray with the accessories in further boxes placed in dedicated compartments - a bit much in a world where makers are making claims for environmentalism. Then again, the Magic Vs isn't going to sell by the tens of millions for that to be of any serious concern. 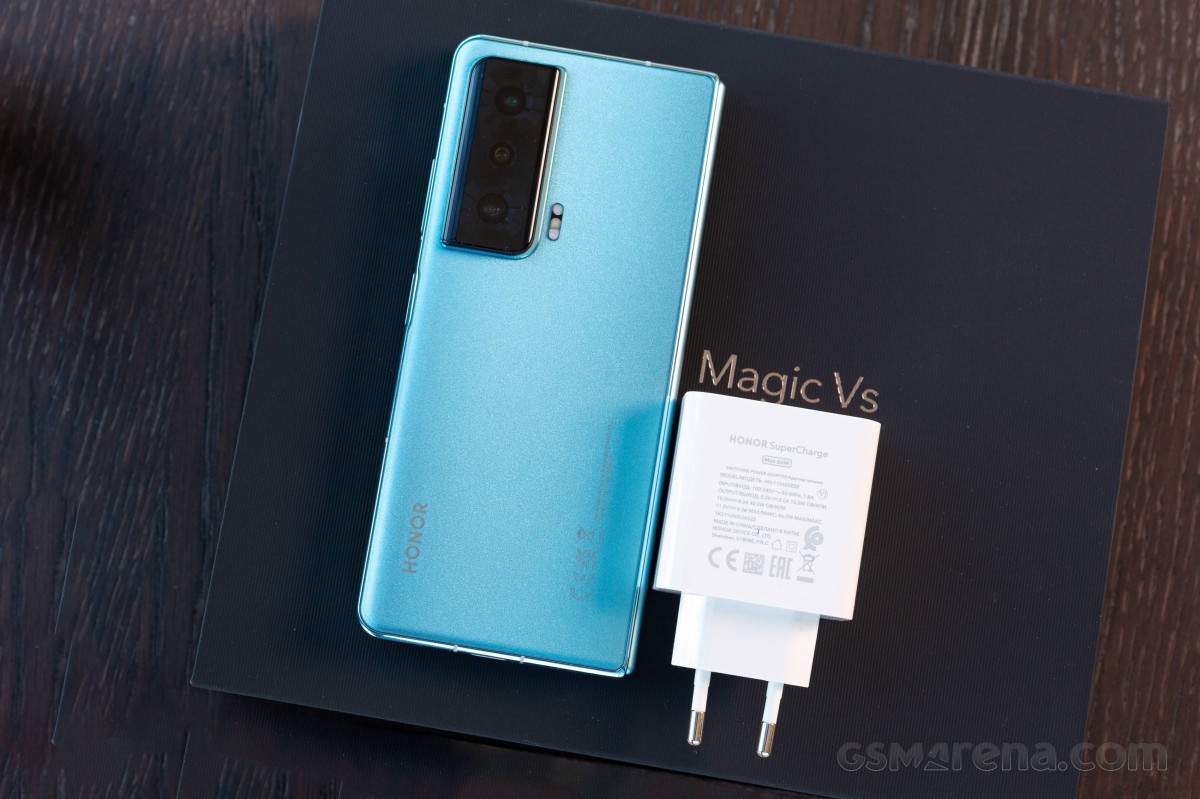 The bundled peripherals include a 66W adapter to match the phone's charging capabilities and a cable to go with it.

Also inside the box is a protector for the back of the phone - the only surface that doesn't feature a display of some sort. It's a combined snap-on/sticker design - it will stay on without the adhesive strip, but the sticker provides an extra level of holding power, of course. 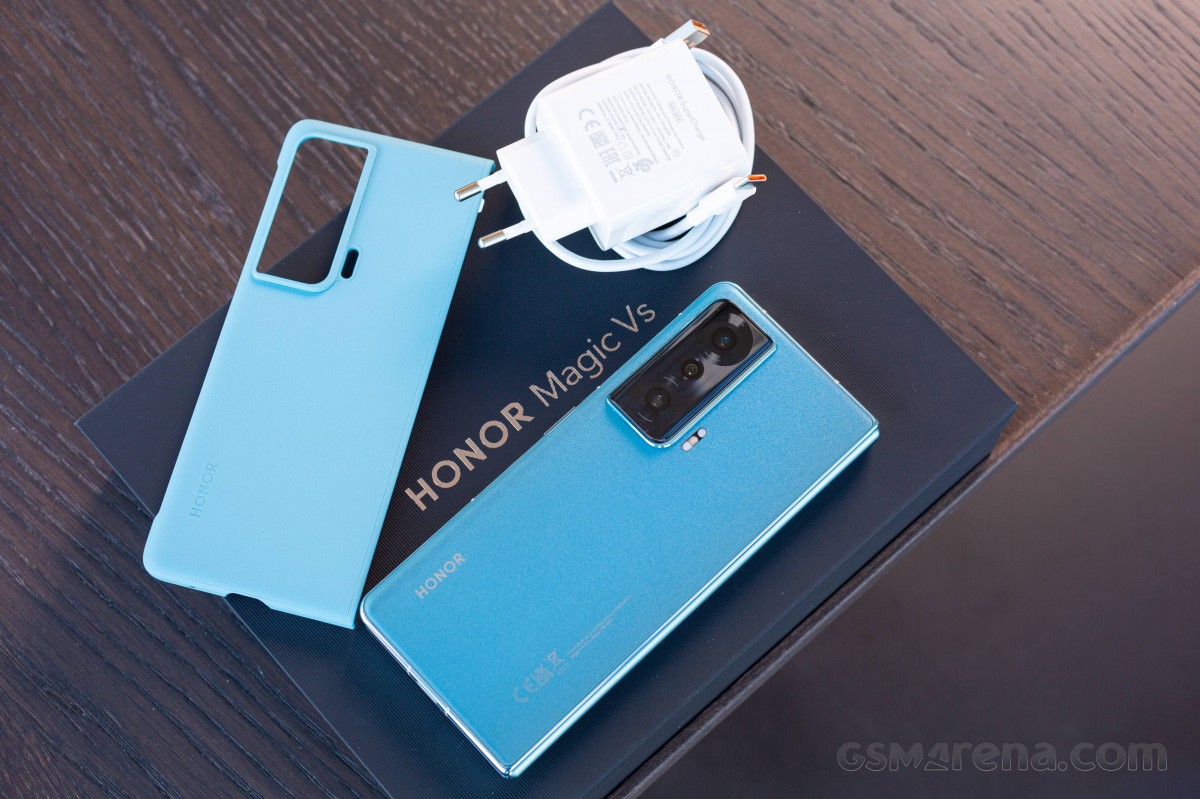 "Vs" is an English/French moniker. It's typically used in Brandy and Cognac, and meant to signify a quality product. As opposed to "low-class" drinks like whiskey, rum, etc. Btw, HTC did this back in 2012 with their On...

I don't think the V used here stands for 5. I believe it represents a silhouette of the phone slightly opened like you see in the main pic. They're copying Samsung. They had to find their own letter.