Honor unveiled the X20 SE in June, and it will add another member to the X20 lineup on August 12, dubbed Honor X20.

In addition to announcing the event date, Honor also posted an image on Weibo confirming the X20's design - it has a 64MP triple camera on the back, with the screen having a pill-shaped hole in the upper-left corner.

The X20 will come in at least two colors, and we can also see the smartphone has a fingerprint reader on its right-side frame joined by the volume rocker, suggesting it will pack an LCD panel. But then we've seen smartphones with AMOLED screens and side-mounted fingerprint scanners, so we'll have to wait for more information to be certain whether the X20 will come with an AMOLED or LCD panel. 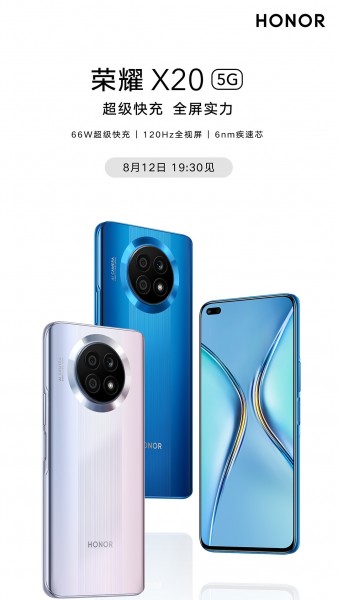 Honor didn't reveal the screen's diagonal or resolution either, but the phone maker did confirm the display will have a 120Hz refresh rate.

The company also confirmed 5G connectivity, 66W charging, and a 6nm chip at the helm. And with the unveiling still over a week away, we expect Honor to reveal a few more features of the X20 in the lead-up to the announcement.

Leica is on p50 as well proof that America s news are yellow pages, that spread lies, Leica has never confirmed that they will not work with huawei on the new series

Rumours were there. But no confirming news followed it

Why is not a partner? Leica said that they leave Huawei. Why not Honor ???