Huawei sub brand Honor has announced that global sales of its X series of smartphones - consisting of devices from the Honor 4X to Honor 7X - has hit the 40 million milestone. 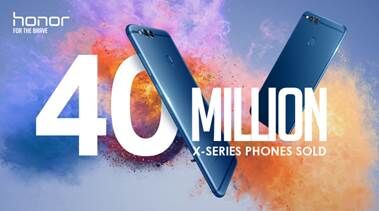 In London, sales in the first two weeks were double that of the Honor 6X, while in Russia, the number was triple, making Honor one of the top 3 brands in the country.

"In the United States, Honor 7X achieved a 250% growth in pre-paid orders from 5th Dec to 14th Dec compared to the sales of Honor 6X during the first 10 days of its debut," the press release said.

try to think sometimes, your comment is totally nonsense, have a nice day ahead :D