The 5 megapixel snapper is ok

The HTC Desire Z is equipped with a 5 megapixel camera for a maximum image resolution of 2592х1944 pixels. While premium Android handsets are already on the 8MP notch, the Desire Z is content to offer good resolution for still images and 720p videos.

The camera interface is new and has received some fun options. Most of the controls are on the right side of the viewfinder, with the virtual shutter in the center. There’s a virtual zoom slider on the left. By default the viewfinder image is cropped so that it fills the entire screen, but you can switch that off.

One neat trick is continuous autofocus – the camera will focus, even if you haven’t half-pressed the shutter key, so that when you do the focus is found much faster. When you move the Desire Z and point it somewhere else it will focus again.

The effects button brings out a panel on the left with the usual set of color effects (sepia, solarize and so on).

There are other kinds of effects too. For example, Warp places a control point on the screen, which you can drag with your finger and see the result in real time. Depth of field is another such effect – it adds a radius slider besides the control point and will blur everything in the photo that falls outside the circle.

You can bring out the extended settings menu by pressing the menu key. Face detection is supported. It’s enabled in self-portrait mode too – you can set it to focus on 1 or 2 faces.

As for the image quality of the photos, we have to say it’s not really the best we’ve seen. There’s plenty of noise, which automatic noise reduction struggles to keep in check (smudging the fine detail as it goes along). Sharpening on the other hand, tries to deal with the resulting softness but does produce some artifacts.

You can judge the camera from the samples below.

We also snapped our resolution chart with the Desire Z. You can check out what that test is all about here. 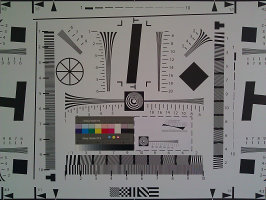 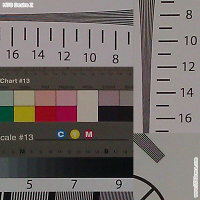 HTC Desire Z manages 720p videos at 25 fps but unfortunately it has its downsides.

On the positive side the interface of the camcorder is similar to the still camera’s and there are lots of customizable options with this one. You can set the video resolution, recording limit and add effects.

Autofocus works here too, but only before you start shooting – then the focus is locked and won’t change even if you get closer or move back.

Videos are captured in 3GP files, which is less than ideal. The amount of captured detail is OK and the videos aren’t over-compressed. However, they exhibited a painful stutter – the video would freeze for up to a second at times.

We tried it with several different video players (including playing the video on the phone) but the stutter is there – and sometimes even more artifacts show up.

The reality is much less impressive than what the specs look on paper – we were rather disappointed. Here goes a sample 720p@25fps video clip.

The HTC Desire Z is a connectivity master. Quad-band GSM/GPRS/EDGE is a given, and the dual-band 3G is blazing fast – 14.4Mbps downlink and 5.76Mbps uplink thanks to HSPA.

The local wireless connectivity has Wi-Fi b/g/n and full DLNA support (both client and server, for images, videos and music) and Bluetooth 2.1.

When you plug in the microUSB cable you’re presented with a long list of options. The basics are Charge only, Disk drive (connects the microSD card as a mass storage drive) and HTC Sync for connecting to HTC’s PC suite.

There are two more options however – USB tethering, which shares the phone’s data connection (and that fast HSPA makes it a great modem for a laptop), while the other option – Internet pass-through – does just the opposite.

Last but not least is the HTC Portable Hotspot – Android 2.2 Froyo has Wi-Fi tethering built-in, but this app is actually more powerful. It can connect 1 to 8 devices (default app maxes out at 5) and you can set the maximum.

You can encrypt the hotspot with WEP, WPA or WPA2 and you can enable only “allowed users” to connect or leave it open for anything (unsecure, but the quickest setup). You can set the app to power off automatically after 5 or 10 minutes of inactivity, saving your battery if you forget to switch it off manually.

Solid web browsing has been an inherent part of the Android deal since day one. And version 2.2 Froyo is the fastest yet – and then there’s the Flash 10.1 capability, which really opens up the Web (which for better or for worse still relies heavily on Flash for video streaming and navigation).

The user interface is pretty much nonexistent at first sight. Once the page loads, all you see is the URL bar and the refresh button on a line at the top of the screen. Once you zoom in and pan around though even that line disappears (scroll to the top or press menu to bring it back).

The Desire Z browser also supports double tap zooming and text reflow, which make it extremely easy to read even longer texts on the phone display. Without text reflow you will either have to zoom out until the text fits (but then it’s too small to read comfortably) or scroll sideways to read each line.

The minimalist UI is still quite powerful – hit the menu key and six keys pop up. There are back and forward buttons, adding and viewing bookmarks and managing the open tabs. Finally, the More button brings out yet more options – anything from finding on page and text selection (which works just like in the messaging app).

Once you select some text, you can launch the Quick lookup app (which offers Google Translate among other things) or share the text over a message or social networking.

Web browsing is a pleasurable experience on the HTC Desire Z

The bookmark list shows a thumbnail view of the bookmarked pages and you get a “most visited” list in addition to the regular history. Tabs are displayed as 3D cards too – a really neat trick is that if you pinch zoom out beyond the minimum zoom level you go straight into the tab selector.

And to further sweeten the deal, HTC Desire Z has Flash support in its web browser. Even though the CPU is downclocked, YouTube videos played quite smoothly. We tried out a few games from the mobile section of Kongregate and found quite a few Flash games that worked very well in the browser (and are optimized for touch control).

Say what you will about Flash, but still most video streaming and game sites use it – so it’s a major advantage for a browser.

Playing Flash games in the browser • The YouTube application

Mind you, the Android 2.1 browser has support for HTML5 and its video tag but that is a few years (at best) away from becoming the norm.

It's a awesome phone for gen-y & businessmen... Thanks to HTC for launched this phone...

Any one who help me about Assign Another Unlock Button, because of only the power button is unlock it is unuse for me i dont like this. also help me how to i attached QuickOffice file on mail.