As 3D is taking over theaters and living rooms around the world, the craze is hitting handheld too. The next thing to shake up the business or on the way to irrelevance: geeks will geek about it either way. Now that the HTC EVO 3D has grown a GSM radio, they get ready to enjoy a real 3D clash of the flagships. It doesn’t get any better than two heavyweight fighters battling it out, and someone’s got the 3D video to prove it. 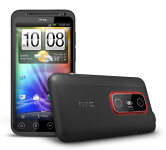 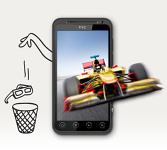 The best part is the HTC EVO 3D, like the LG Optimus 3D, is not placing all its chips on the stereoscopic screen and pair of cameras. No sir, each of those smartphones claims to have the best there is for power and speed. We are talking mighty dual-core CPUs, loads of RAM and superb connectivity. The EVO 3D can be your kind of smartphone even if you don’t care about 3D stills and videos.

Things are certainly looking promising here, but smartphones are past the my-spec-sheet-is-longer-than-yours stage as of a few years. It’s all about the user experience now and, while powerful hardware is the first step towards providing it, you need equally good software if you are to challenge the best on the market.

The HTC EVO 3D in the comfort of our office

A massive high-res screen certainly looks good on paper, but it takes inspiration and clever design to beat those Super AMOLEDs and those Retinas. A new Adreno GPU with a major speed boost might seem more than anyone will ever need, but competitors have not been sitting around either so it’s always going to be close. And you cannot say whether the EVO 3D has the spark by just looking at the specs.

We hope a full review would bring you a whole lot closer to finding the answers you need, so let’s get started. The EVO 3D gets unboxed right after the break.