The HTC EVO 3D has a 1.2GHz dual-core Snapdragon chipset with Adreno 220 graphics to support its power-hungry interface and 3D features. In essence it should be on par with the likes of the Galaxy S II, Sensation and Optimus 2X – in reality the scores tell a different story.

The higher-res screen puts it at a disadvantage as the GPU has to push out 35% more pixels than the competition. But more RAM gives the EVO 3D the upper hand over the Sensation.

We did go all out in testing the EVO 3D version we had for our head-to-head with the Sensation 4G, but this is a new unit we're reviewing and there are some differences. Let's get the technicalities out of the way before we go on.

This EVO 3D is a retail unit running version 2.3.4 of Gingerbread; for comparison's sake the US version for Sprint that we reviewed recently had 2.3.3. Although the more recent software implies some further tweaks, in reality the GSM version of the EVO 3D did worse in the synthetic tests. Today however, we pit the EVO 3D against its main GSM rival - the Optimus 3D - and we’ve added some dual-core heavyweights for flavor - the Galaxy S II and the HTC Sensation - let's take a look at the numbers.

Quadrant gauges the 3D performance aspects of the EVO 3D and it’s clearly at a disadvantage with its qHD resolution as opposed to the Optimus 3D and the Galaxy S II. It was outscored by the Sensation and by a large margin too, which is odd. The US CDMA flavor of the EVO 3D did a lot better here. 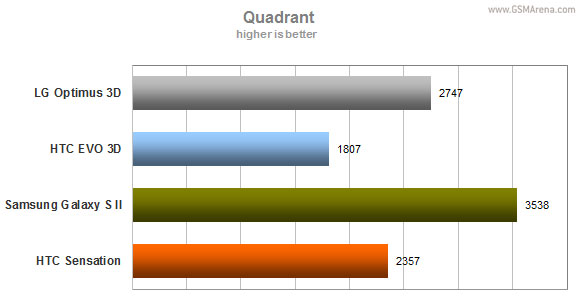 Linpack is based on a benchmark for supercomputers so it makes perfect use of all the cores it can get - the faster, the better too. We ran multi-thread tests. The EVO 3D managed to trounce only its in-house competition and lost to both the Optimus 3D (close) and the Galaxy S II (badly). 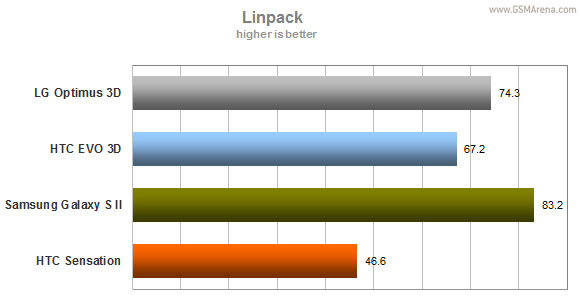 BenchmarkPi is CPU-intensive but it's not designed for dual-cores so the older CPU architecture shows clearly. Here the EVO 3D was horrible. 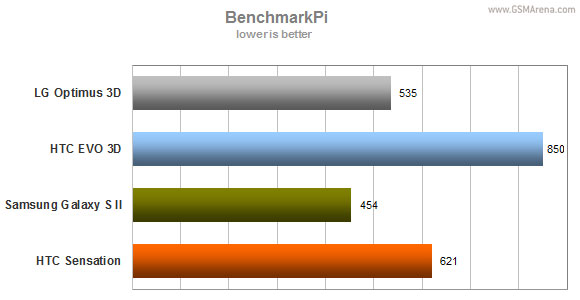 SunSpider is an in-browser benchmark and it shows the HTC EVO 3D trailing behind. Now, HTC has put a custom Flash player (as they usually do) in the browser but that can't be it - SunSpider is pure JavaScript. Anyway, that’s not our only grudge with the web browser on the EVO 3D, but more on that later. 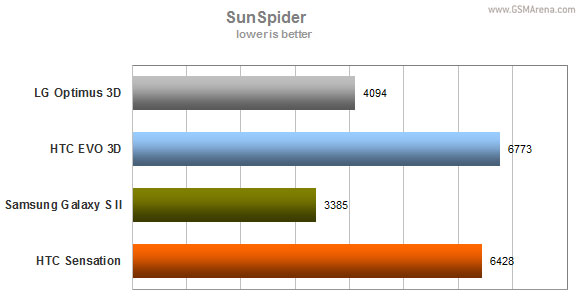 Vellamo is a web-browsing benchmark. It tests stability, page load and reload speeds, smoothness, JavaScript engine performance and also graphics and rendering. The EVO 3D came out on par with the Optimus 3D (2 points could’ve gone either way) and it performed well but the Galaxy S II is clearly the victor here. 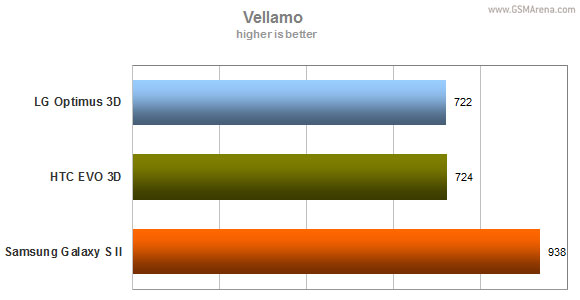 Synthetic benchmarks are for number-crunchers and don't always tell the whole story. The EVO 3D is a solid smartphone and it behaves like one. No need to fear frustrating lags and freezing. Differences in performance are inevitable but there's nothing major to worry about.

Social network integration goes deep in the EVO 3D's phonebook. It manages to keep things neatly in order, even though it’s juggling everything from SMS to Facebook photo albums.

The entire People app (the phonebook) is tabbed and with more tabs than the stock Android. You have all contacts, groups (including favorite contacts there), as well as a call log. From a drop-down menu at the top, you can filter contacts based on where they came from - the phone's address book, Facebook, Twitter or your HTC Sense account.

Selecting a contact displays the basic details: name and photo, numbers, emails and such. That’s just the first tab – the other tabs hold further details, including email and a call log.

The second tab holds the text messages between you and the given contact in a conversation layout. The third tab is a list of emails you've exchanged with the contact.

The next two tabs really turn the EVO 3D into a powerful networking tool. The first holds Facebook contact updates, and the other called "Albums" pulls the albums that contacts have created on Flickr and Facebook.

The final tab shows the call history for the contact.

When editing a contact, you start off with just one of the essential fields but you can easily add more.

If you’re switching from another phone don’t worry – you don’t even need a computer to pull your contacts, messages and calendar items from the old phone into your new HTC. The Transfer app supports many phones from major manufacturers and moves the data over Bluetooth.

It’s an old trick (Symbian-powered Nokias have been doing this for ever) and most people would probably go with syncing the contacts over the cloud, but still it’s a handy tool to have.

The on-screen dialer features a keypad, a shortcut to the call log and a list of contacts beneath (you can hide the keypad). The HTC EVO 3D has both Smart Dialing and Voice dialing.

The phone held on to signal just fine and we had no Sensation-like issues with the EVO 3D.

The EVO 3D makes good use of the accelerometer during calls – turning the phone over will mute the ringer of an incoming call, while placing it down, starts the loudspeaker automatically when you are in the middle of a call. The other feature is Quiet ring on pickup – once you move the phone, the ringer will quiet down (but not cancel the call).

Yet another option is pocket mode – the ringer volume will increase if the phone is in your pocket (the proximity sensor takes care of detecting that).

Here's how the HTC EVO 3D fares in our traditional loudspeaker performance test. It scored an average mark placing it right alongside the Sensation. It’s not a quiet phone per se, but you’d have to choose a loud ringtone just to be safe.